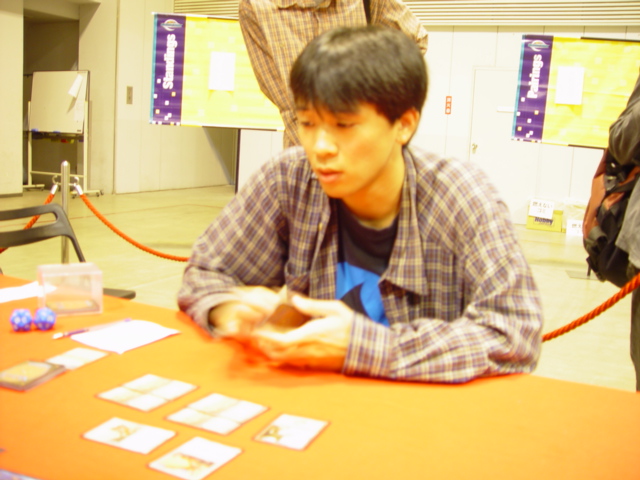 This match is for a glimmer of hope. The winner will be one of four players with thirty-three points, one of whom will advance to the Top 8. Well, for amateur Toshiyuki Kuroda it's for a lot more than that, since that'll put him even further up in the amateur rankings. But Tadayoshi Komiya has his eyes firmly on the prize, and he will not waver.

The first game was decided when Kuroda stopped playing lands after the first two mountains. Komiya's plays went: Goblin Sledder, Gustcloak Harrier, morph, morph. When Kuroda found his island to make a Mistform Dreamer, Komiya was ready with Pacifism. Komiya didn't even need to see his next card to convince himself to scoop.

Now it was Komiya's turn to be behind. Kuroda opened with Goblin Sledder, Information Dealer, and then the outrageous Goblin Sharpshooter. Komiya's Medic was stranded in his hand, and he morphed out a Daru Lancer. Though Kuroda had Mistform Wall, he took a little extra damage to make sure he could protect it. When he finally did block, he stopped Fever Charm from killing it with Discombobulate.

Komiya was still bringing pain with his Gustcloak Harrier, and he summoned a second one to help out. Kuroda made a morph. Komiya hit for four, then let Kuroda's morph through. He turned over Snapping Thragg, taking out both Harriers with the Sharpshooter's help. It looked like he would run away with it until Crowd Favorites showed up. Komiya had eight mana and started to lock down. He made a play to finish Kuroda quickly, attacking with his Lancer, but when he went to tap the Snapping Thragg, Kuroda had Mage's Guile. Komiya did a double-take. Kuroda had lethal damage coming in, thanks to the Sharpshooter.

It was another quick opening for Komiya in the third game. He suited up a Glory Seeker with Crown of Fury and started serving. Kuroda assembled some 1/1's and tried to figure out a defense. Komiya again had Pacifism for Mistform Dreamer, and then the two made morphs. Kuroda was already at eleven.

Ghosthelm Courier was answered by Pearlspear Courier. It bolstered the Seeker who dove in. Information Dealer made a noble sacrifice. Komiya tried to put it away quickly with Sparksmith, but Kuroda had Discombobulate. He needed a little more, though, since Komiya's morph turned out to be Daru Lancer. Things were looking grim. Kuroda answered the Courier. And then came the Crowd Favorites. This time all they had to be was 4/4, and Wave of Indifference made sure they and the Lancer struck home, giving the game to Komiya