Both these players are accomplished pro’s looking to add another GP top 8 in their resume. Bram is playing White Weenie splashing blue for Quiet Speculation and Circular Logic and Wilfried is playing a Blue Green Madness deck.
They need a win to make top 8 as they’re on 10-2-1 coming into this round. 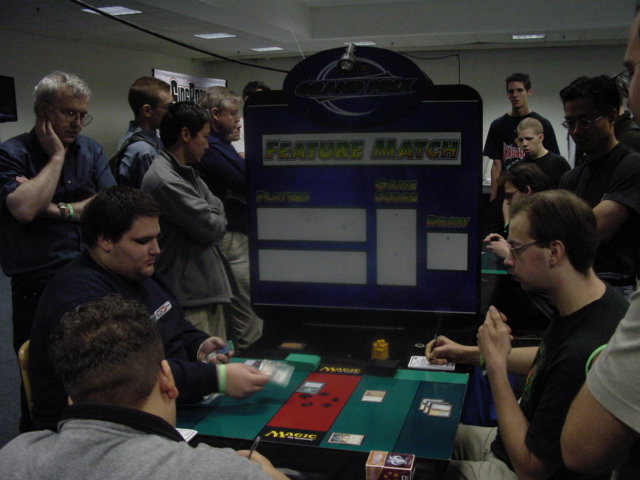 Bram won the die roll and played first and kept. Wilfried mulliganed twice but got a Careful Study, an Aquamoeba and an Arrogant Wurm with a Forest and an Island which he played in the first three turns. Bram had a Patrol Hound and a Chaplain to go with his Sacrament while Wilfried’s double mulligan started to show as he couldn’t get his creatures through.

A Quiet Speculation for Prismatic Strands, Deep Analysis and Battle Screech put Wilfried even further behind. The only thing keeping him in the game was the fact that Bram couldn’t find a fourth land to cast the Screech in his hand.
Ranque, in the meanwhile, drew all lands after his explosive start and when Bram found a fourth mana source six bird tokens quickly did him in. 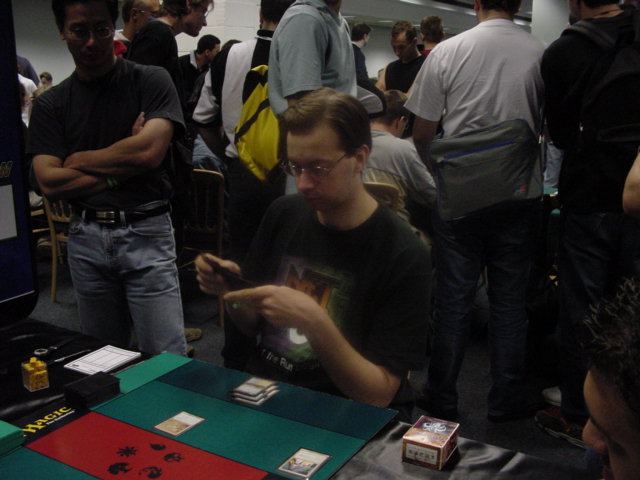 Ranque played first in the second game and kept a hand with two Careful Studies and not much else. He played both on the first two turns and failed to find a single creature while Snepvangers skillfully drew a Plains and an Expanse to go with his all island draw to enable a turn 2 Spurnmage Advocate and a Divine Sacrament.
Ranque showed off some of his sideboard tech, an Alter Reality rendering a Sacrament useless and a Howling Gale taking out 4 Bird tokens.

Wilfried then drew a Mongrel and stabilized a little as Bram continued to drew nothing much but a bunch of 1/1s. One of them was another Spurnmage Advocate however and a Glory showed up soon after to protect them, making it very hard for Wilfired to actually win. Two Coliseums give Wilfried an Arrogant Wurm and two Roars to give him some creatures to work with. More importantly though, it gave him 3 Aether Bursts and a Psionic Gift to help him get the Advocates off the table despite the Glory in Snepvangers’ graveyard. 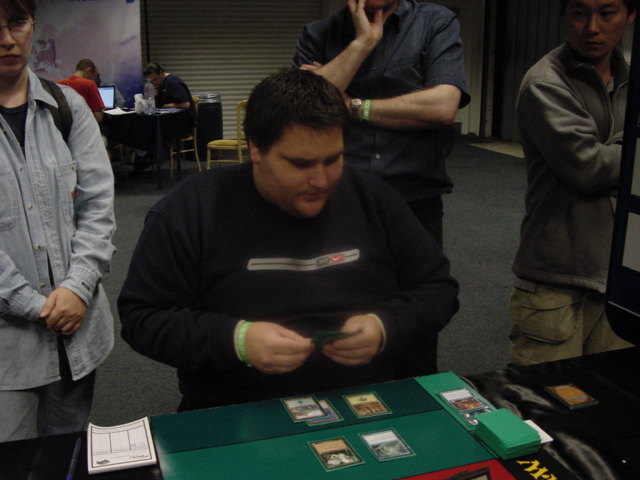 When Ranque activated his Gifted creature Bram activated his Glory so Wilfried untapped and Aether Bursted Bram’s board. Bram played Prismatic Strands. Next turn Bram caught Wilfried off guard with a Vengeful Dreams for 4 decimating his board.

Nevertheless Bram conceded as the Alter Reality in Wilfried’s graveyard prevented him from getting his creatures large enough to protect them from Psionic Gift.

Ranque had to mulligan again and, obviously disgusted by his deck, decided to keep a one Coliseum hand. He drew an Island on turn two but no green sources and a Quiet Speculation for three Battle Screeches looked to finish his top 8 dreams in a hurry. Bram didn’t have a third creature right away though but when he played a Glory on turn 5 with Wilfried still stuck at two lands, the Frenchman extended the hand.

Match to Bram Snepvangers (2-1) who advances to the top 8.