Round 14: Five for Fighting 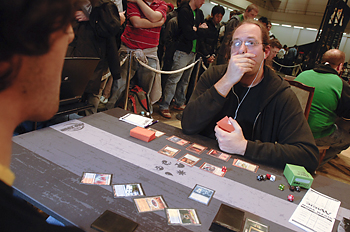 Boat Brew inventor Brian Kowal pilots his creation in the final round of the Swiss.”Where you from?” Brian Kowal joked as he sat down to square off against former Player of the Year Gabriel Nassif in the Arena. Gabe laughed, and the two got down to the business of randomizing their decks. Both long time denizens of the Pro Tour, they knew each other well.

Brian, who hails from the Madison, Wisconsin stomping grounds of Pro Tour champions Bob Maher and Mike Hron, has become well known of late for designing the Red-White Reveillark deck affectionately referred to as “Boat Brew.” His opponent, Frenchman Gabriel Nassif, is no newcomer to the Arena, with multiple Pro Tour Top 8s already on his resume. As they continued shuffling, there was little doubt he was hoping to add another one.

Brian opened on a mulligan to start the game, then took a second. “Should have kept,” he said, after looking at his second. Being down two cards didn’t seem to faze him, however, as he opened on Windbrisk Heights, then Mind Stone to accelerate into Ranger of Eos. Nassif had no counter to stop the 3/2 from hitting play, and Kowal was back up the two cards he had mulliganed, tutoring for Burrenton Forge-Tender and Figure of Destiny. Nassif used Terror to kill the 3/2 before making his third land-drop.

Soon the Figure of Destiny was a 4/4 and had knocked Nassif to 16 life. Out of fear of an opposing Plumeveil, Kowal wasn’t attacking with his Burrenton Forge-Tender. Looking to contain the rampaging Figure of Destiny, Nassif played Cryptic Command to bounce the creature and cantrip. Brian was having none of it, using Path to Exile on his own creature, countering the Cryptic Command and netting him a land to boot. The heads-up play demonstrated just how these two competitors managed to find themselves battling for Top 8 in the last feature match of the Swiss rounds.

A second Ranger of Eos from Brian Kowal was countered with Broken Ambitions, then Nassif took over using an Esper Charm to knock Brian’s last cards from his hand, including a Siege-Gang Commander, and a second copy of the instant to draw two cards for himself. At 14 life and staring down just a Burrenton Forge-Tender and Mogg Fanatic, Nassif was in very good shape. When he played a Broodmate Dragon the following turn, things were looking very dire for Brian Kowal.

Looking to attempt a comeback, Brian played Knight of the White Orchid, but he did so following two Mulldrifters from his opponent, one evoked and one hardcast. Nassif’s follow-up attack with all of his fliers left Kowal at 1, and the Frenchman played Pithing Needle set to Windbrisk Heights (Kowal had two copies of the land in play) and a Wall of Reverence. It took but a quick glance at the 1/6 Wall to elicit the concession from Brian.

Many a player has questioned coverage decklists that show successful players running 61 cards in their decks instead of the usual 60. Surely no one at the Pro Tour breaks the sacred rule of minimizing the size of your deck—it must be a typo. As Brian Kowal pile-shuffled his opponent’s deck for the second game of their match, he found something that definitely wasn’t a typo. Nassif’s deck had an overloaded 61 cards, a surprising decision from one of the best minds in the game. It just goes to show, the best minds often make outside-the-box decisions to get to the top. 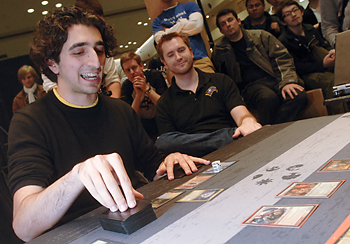 Gabriel Nassif’s ubiquitous grin is one of the Seven Wonders of the Pro Tour. True story.Brian Kowal looked with a grimace at his opening hand, devoid of lands. “Nope,” he muttered, glancing at his opponent. “You’re so much better [than me],” he mocked, adding more than teasingly, “How do you sleep at night? I know you put the bad cards on top!” For the second time in the match, Brian Kowal shipped his hand of six back for a hand of five.

The American opted to keep his five-carder and opened on Reflecting Pool. Nassif started on the same land, but having only one land in play to Kowal’s two on Brian’s second turn meant the French player didn’t have to worry about his opponent getting a freebie as he tapped out to play Knight of the White Orchid. Brian was going to need a lot of help to win the game, hoping Gabriel was short on answers for the minimal amount of threats he could produce. Instead, Brian lost his Knight on its first attack when Nassif played a surprise Plumeveil.

“Stuck on three lands?” Kowal pleaded as Gabriel hesitated before playing a fourth land on his fourth turn. It wasn’t BK’s lucky day, as Nassif did have the land in a second Island. Still, the play allowed Brian to tutor up a free fourth land drop of his own as he played a second Knight of the White Orchid on his own turn. That didn’t make up for his early mulligans, and Nassif soon rocketed ahead in the card department. Esper Charm followed by a hardcast Mulldrifter gave Gabe so many cards, he actually had to discard one. The 2/2 ‘Drifter also left him tapped out, long enough for Brian to sneak Siege-Gang Commander onto the table.

Gabe hadn’t seemed worried as he watched an army show up on his opponent’s side of the board in just one card. After attacking Brian for 2 with Mulldrifter, he revealed why, playing Infest to clear the board of everything but Plumeveil. His follow-up, the next turn? Cruel Ultimatum to get back his Mulldrifter, empty Brian’s hand, and clear Brian’s board of a Figure of Destiny. A bad game had gotten considerably worse for the Midwestern stalwart.

Nassif managed a Broodmate Dragon the very next turn and it was all but over. An ensuing attack with the twin 4/4s took Brian to 3, and Esper Charm to make him discard his hand on his draw step sealed the deal.