Round 14: Frank Karsten vs. Christoph Lippert 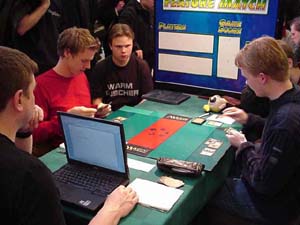 Karsten wins the dice roll and decides to play first. An early Cephalid Scout is Afflicted after an end of turn Words of Wisdom but Lippert replaces it with a Diligent Farmhand which is soon gets sacced for another forest. Karsten produces a Skywing Aven and Lippert decides to summon an Aven Smokeweaver. A Soul Scourge for Karsten changes the life totals for the first time, reducing Lippert to seventeen but he answers with another Skywing Aven.

Both players are jockeying for position and Karsten uses repel on the Smokeweaver before swinging with his Skywing. Skywing Aven is then blocked by Skywing Aven and after both players discard a card to return the birds to hand Karsten uses Mesmeric Fiend to remove the offending card from Lippert's hand. Lippert makes a Possessed Centaur and passes but doesn't use it to block Karsten's attack and so he goes to fourteen before the Dutchman plays a Limestone Golem.

Lippert replays the Aven Smokeweaver and passes without attacking. The Golem and the Soul Scourge swing with the Smokeweaver blocking the Scourge, and an Afflict and a Repel effectively cancel the attack and the regained life from the Soul Scourge cancels the Golem damage.

Karsten's two Skywing Avens are joined by the Soul Scourge again and Lippert who, with no cards in hand has been reduced to topdecking is staring at two very hard to kill flyers from the dodgy life position of 8-17. The Golem reduces his life to five and then Karsten plays a Scrivener to return a Repel and the writing is on the wall. Lippert makes a Call of the Herd token and immediately flashes it back but the ground pounders are not enough as the Repel removes the flying blocker and Karsten swings for the win.

Karsten offers a draw as the players are shuffling up but Lippert refuses pointing out that a draw or loss won't knock him out of top 16 and so he may as well play and attempt to make top eight.

Lippert decides to play first but draws a hand of seven lands and has to mulligan. He keeps six although he is still land heavy. Two islands each then Lippert lays a Skywing Aven and attacks next turn before adding a Diligent Farmhand. The German swings for three next turn and Karsten has no response as he has five islands but no other lands.

Lippert sacs the Farmhand at the end of turn to get another land and then attacks and plays a Possessed Centaur which is Syncopated the first spell Karsten has been able to play! Karsten finally plays a Scrivener but that is Syncopated by Lippert.

The Skywing Aven beats continue and Lippert lays a second one with the scores currently 20-11. Karsten finally gets a swamp but just passes the turn so Lippert attacks for four with the two bird soldiers 20-7.

Karsten finally starts to do things and Ghastly Demises one bird and Repels the other to clear the board. Lippert decides to discard and bounce them both back to his hand. Karsten gets a second swamp and so makes Crypt Creeper and Fledgling Imp. Lippert replays both Skywing Avens. Both black creatures swing unblocked and then the birds swing unblocked and are joined by an Aven Smokeweaver. Aether burst removes the blocker and the Creeper attacks making the life 14-3.

The Creeper is used to remove Dematerialise from the graveyard but when the Aven attack next turn Karsten makes the Imp fly to chump block one of them but has no answer to a Muscle Burst on the other.

Sadly game 3 is an even worse anti-climax as during this game Karsten can only manage two Swamps and a Bog Wreckage. He manages to cast a couple of chump blockers but is unable to prevent Lippert from rolling over him with multiple creatures.