Round 14: A Friendly Rivalry

ookie of the Year Sebastian Thaler and Kenji Tsumura have a very friendly rivalry. Both young players of incredible talent, they've crossed paths four times already, most famously at Pro Tour-Geneva. They met in the final round, with Kenji having locked up a spot in the Top 8. Unfortunately, Kenji couldn't scoop his friend in because Katushiro Mori would be on the bubble if both he and Kenji won. When the results came in and Mori wound up ninth on tiebreakers, Kenji was literally sick to his stomach for having denied Thaler a spot on Sunday.

They've have split the matches 2-2 in their four previous encounters. This weekend they brought along their good friends Florian Pils and Yuuta Hirosawa. This time, both teams needed a win to make the Top 4 (and then a little tiebreaker luck on top of that), so it would be a hard-fought match with no hard feelings.

After shuffling up, they exchanged heartfelt good luck wishes. Hirosawa was emphatic.

Thaler and Pils won the die roll and pulled up their openers. Pils needed to go back to the well, and after a discussion, Thaler joined him. Thaler's next seven were acceptable, but Pils wasted no time in shipping them back for six. He grimaced, but they decided he should keep. Tsumura took a free mulligan, and they were off.

The first two turns passed quickly with lands all around and a Sinew Sliver for Pils. The reason for Pils's grimace became clear on turn three: He was stuck on a pair of Plains. He suspended a Shade of Trokair, and Thaler made no play. 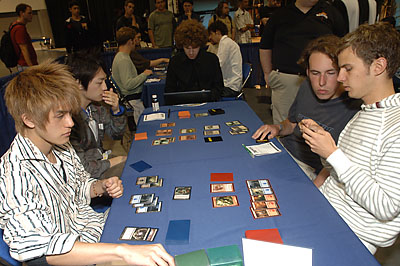 The third turn for the Japanese was a Deepcavern Imp for Tsumura. Fortune refused to put Pils out of the game entirely, and mercifully served him up a Forest. He dropped Outrider en-Kor. Thaler chained Coal Stoker into a morph. Tsumura echoed his Imp with a Dark Withering, and after a brief consult, eliminated the Outrider. Hirosawa put the brakes on the Germans' burgeoning offense with a turn-four Imperiosaur.

Another land for Pils, and he was in business. He dropped Essence Warden and then a morph, cueing Tsumura's Midnight Charm. Thaler further cluttered the ground with Fomori Nomad. Safe behind the Imperiosaur, however, the Japanese were in no hurry. Monsters came down on both sides and the Imp continued to peck away.

With one card in hand, Pils finally crossed into the red zone with his morph. The Japanese let it through, and Pils pitched his last card, Whitemane Lion, to turn on Gathan Raiders for 5. Thaler meanwhile made and cashed in a Fathom Seer. They were gaining momentum.

The Japanese were unconcerned. The end of the Germans' turn revealed Hirosawa's Sprout Swarm, generating the first of a potential army of Richard Hoaen Saprolings. Tsumura had Assassinate for the enemy 5/5 and a Rathi Trapper to spare. Hirosawa's Herd Gnarr went just fine with his instant token generator. The life totals stood at 22 all, but the balance was tipping.

Pils plucked a Herd Gnarr and played it. Thaler suspended an Infiltrator il-Kor, their first chance at returning fire. Tsumura untapped and asked for card counts. Thaler had five. Hirosawa tried to dispatch the morph with a Fatal Attraction, but willbender steered it over to the Trapper. Any celebrations were postponed when Tsumura turned over a Haunting Hymn that left Thaler with just Venser's Diffusion.

While Thaler rebuilt by bouncing his Seer and replaying it, Hirosawa and Tsumura were busting out Flowstone Channeler and Urborg Syphon-Mage. With the board locked, Tsumura started draining for 4, and the army of grumpy Saprolings was fast getting out of control. There were too many problems for the Germans to solve. In a couple short turns, it was over.