Round 14: Gabriel Nassif vs. Helmut Summersberger 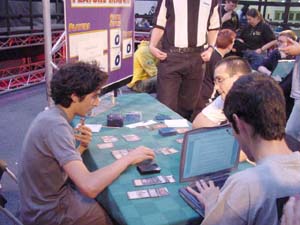 This is the big round. Winner makes the Top 8, loser settles for the Top 16 and a bit of cash. The whole weekend boils down to the next two – or three – games for these two players.

Things did not start well for Summersberger who had to take a mulligan. The second hand was much better and the Austrian kicked things of with Llanowar Elves and Call of the Herd.

Meanwhile Nassif was busy laying lands. Which is quite good because he lost the two Features Matches he got these weekend to mana screw. On the second turn his Chainer's Edict got the Elves.

The Call-Walla team came in to drop the French to thirteen. That was more than enough for Nassif: he Wrathed his troubles away. Summersberger flashbacked the Call. The next token roared in but Nassif bounced right back with Renewed Faith.

Akroma's Vengeance got rid of the token and at sixteen Gabriel Nassif was ready to use his Skeletal Scrying. Summersberger played a morph and Nassif cycled Decree of Pain to kill it.

The Austrian's next try was Wild Mongrel and the Frenchman dismissed it with Chainer's Edict. He played Skeletal Scrying for three and passed the turn to Helmut.

Firebolt brought the French to eleven, then an Violent Eruption made that life total seven. Nassif played Cabal Therapy for Volcanic Hammer and missed. He DID see Violent Eruption so he knew he was in a bit of a problem.

That Eruption and the flashbacked Firebolt slid Nassif to a single life point. Summersberger followed that with Wild Mongrel with Elephant Guide. Nassif counted his mana several times and played Decree of Justice to get four Angels. He did have Chainer's Edict in hand but he probably felt he couldn't afford to play slowly anymore.

Again Helmut Summersberger deck failed to provide any of the several direct damage spells it still contained and the Austrian could only shrug and scoop his cards.

Helmut send his first hand back, and wasn't too happy about keeping the second one. Nassif was very tempted to keep his first hand as well. He only had one land but he had Circle of Protection: Red. He decided to mulligan and after peeking at the top of deck seemed quite pleased with his choice. His second hand wasn't bad either. 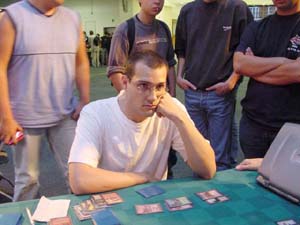 Llanowar Elves entered the game and on the next turn gained an Elephant Guide. It attacked once alone and Summersberger played Call of the Herd to help them out. Meanwhile Nassif was playing lands, with the help of Eternal Dragon.

He Disenchanted the Guide on the next combat phase, falling to twelve and used Chastise to send the Call token a little later. Summersberger flashbacked the Call to keep the pressure.

Chainer's Edict took away the Elves and the Austrian played Grim Lavamancer and Sulfuric Vortex. Nassif frowned and passed the turn over once again. Despite owning the table Helmut Summersberger stopped for a full minute before attacking with the Call token.

Nassif cycled Decree of Justice for two tokens and chumped the Call. A Firebolt dropped him to seven while he slammed his deck. The Vortex dropped him to five. He played Wrath of God but it was too late: the Lavamancer shot him twice and Helmut only needed to untapped and flashback the Firebolt to let the Vortex finish things of.

Again Summersberger had to mulligan. Gabriel advised him not to cut the deck and Helmut obliged. Helmut's second hand was...

In came the turn one Elves, turn two Lavamancer. Nassif played Circle of Protection: Red after hesitating a bit. Four mana gave Helmut Phantom Centaur. Chastise took care of that on the next swing, leaving Gabriel at twenty-two. 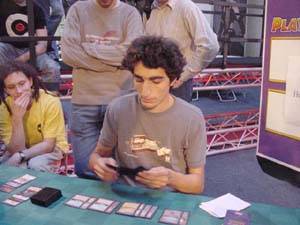 Helmut played another Elves and attacked with it a couple of times. Nassif took his own sweet time and eventually fired Duress seeing only land and Violent Eruption. For once Duress was glad to meet Eruption: the COP: Red too care of it.

The Austrian's army was too small to put Gabriel Nassif under considerable pressure. Even with an added Basking Rootwalla, Nassif had a lot of life to work with. When Helmut pumped the Rootwalla the Frenchman had his second Chastise. Again, Helmut rebuilt. This time with Wild Mongrel.

At seven mana Nassif returned the Eternal Dragon to his hand. Trouble was on the way for the Austrian. Helmut's Lavamancer forced Gabriel to tap out for the COP: Red. Violent Eruption and a full out attack dropped the Frenchman to ten.

Calmly Gabriel untapped and cleaned the table with Wrath of God. He agonized over a Cabal Therapy but it turned out Helmut had only a land in hand. Gabriel landcycled the Dragon once again.

Summersberger was totally out of fuel and the third time around Nassif felt confident enough to play the Dragon and finish the game. He Edicted a Rootwalla away just to avoid any surprises and accepted Helmut Summersberger handshake on the next turn.