Round 14: Gabriel Nassif vs. Thomas Preyer 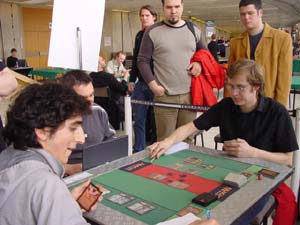 These two players are from different worlds, Gabriel is a prolific player, constantly in the Ostelen centre drafting with his friends, learning the game. The times he isn't drafting live, he's on Magic Online, drafting away into the small hours of the morning.
By comparison Thomas turns up to a GP once a year, plays some spells, does quite well, then disappears out of the limelight to focus on his real life. Prague is his first GP this season.

Thomas came out very slowly, needing to cycle a Barren Moor on turn 3, and not making a Morph, on Turn 4 however he busted out a great answer to Nassif's morph with a Snarling Undorak, which he backed up with a Krosan Vorine. Nassif was on the defensive with his Outrider and Morph creature, looking to either unmorph a beast or play one from his hand to lock up the ground.

Gabriel spent a long time thinking on his turn, distressed by his single red source. Eventually he unmorphed the Shaleskin Plower, killing a Forest and attacked for 7. Thomas attacked back and provoked the Shaleskin Plower, leaving Nassif with only a 2/2 Outrider. He cast a Morph and attacked, unmorphing his Battering Craghorn to do 2 extra damage leaving Thomas at 9. When Thomas returned the attack, Gabriel went to 11, and Thomas backed up his board with a Brontotherium, which was promptly Pinpoint Avalanched, before Gabriel attacked him down to 2. Gabriel then cast Lavamancer's skill on his tapped Outrider and passed the turn. It was Thomas' turn to think, and he decided to attack for 4 with the Undorak and cast Wirewood Savage to make his Timberwatch Elf bigger, and the Wirewood Pride he had in hand more effective.

Gabriel thought for a while before attacking into the Wirewood pride, and exclaimed "Arggghhh" when the spell hit.

He then cast 2 Skirk Outriders, with which to bring the beats. With his opponent on 2 though, it was successful in stalling his attack, and suddenly the game entered topdeck mode. 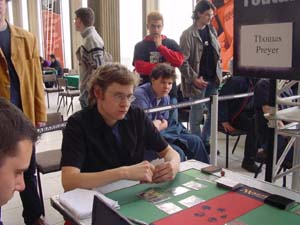 Gabriel cast the Morph he had just drawn, and flipped the Echo Tracer to bounce one of Thomas 2 blockers, and came in for lethal damage.

Both players also kept their hands for game 2, and this Time Thomas had a turn 2 play. Unfortunately it was Invigorating Boon. Gabriel also had a turn 2 play, which was more significant in the matchup, in the form of Riptide Biologist. Thomas then made a Savage, and backed it up with a Morph, while Nassif started the beats with his own morph before making a backup of his own.

Thomas' attack caused a lot of thinking from Gabriel, but in the end he chose not to block, and Thomas followed with a Snarling Undorak that drew him a Card. When Gabriel attacked next turn he blocked with the Undorak, and had the Wirewood Pride to trump Nassif's Battering Craghorn.

Gabriel made a second Biologist, and a Covert Operative, but Thomas was going nuts drawing cards from his Savage, first with a Brontotherium, which attacked, and was blocked by Gabriel's entire team, and then with a Krosan Vorine. Timberwatch Elf made his turn complete.

Gabriel could only muster a Morph in his turn, and things did not look good. The Vorine provoked the Morph, and was pumped by the Timberwatch Elf. Gabriel bounced the Vorine with his Echo Tracer morph, and Thomas was quite happy to draw another card from the Savage. After some thinking in his turn, Gabriel looked at the top 5 cards of his library, and scooped. 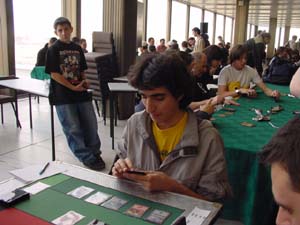 Both players again kept their hands, but Gabriel's draw came slightly out of order as he made a turn 3 Sparksmith. Thomas Chose not to play a turn 3 guy, but instead made turn 4 Timberwatch Elf, which didn't get shot at end of turn, as the Invigorating boon was in play, and could make it a 2/3. Instead Gabriel activated Sparksmith in his turn when he saw he hadn't drawn a Goblin, and used Crested Craghorn to finish it off.

Thomas cycled his Tusker to get a Swamp in his turn, and was attacked down to 12 when Nassif made Ridgetop Raptor to boost the Outrider. Thomas had a plan though, and on his next turn made a 9/9 Feral Throwback, revealing 2 Snarling Undoraks and a Hundroog.

Gabrielbounced it using an Echo Tracer on his turn, and took him down to 3 life with his monsters. Thomas looked at his cards, and scooped.