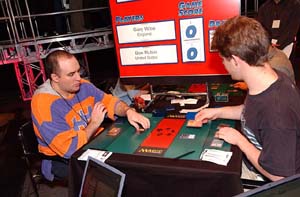 A lot of players played a lot of matches in the fourteenth round where they were hoping the result impacted the Top 8. The math was fairly complicated and a lot of it looked like it would came down to tiebreakers amongst the players at 10-3-1. By far the most familiar names in the feature match area were Gary Wise and Ben Rubin. With almost $200,000 in career winnings between them along with half a dozen Top 8's, theirs was the marquee matchup. It also featured the innovative Blue-Red Compulsion deck that Rubin, Brian Kibler, and much of the Magic Colony chose to run in Osaka. Wise ran mono-black.

Both players stumbled out of the starting gates in game 1, but their dueling mana problems meant they entered the midgame pretty much still at parity. Rubin did have Compulsion in play, but Wise was eventually able to clean out Rubin's hand with a Mind Sludge. Rubin smashed Wise down to 4 with a Psychatog (Rubin was actually only one half point of damage short of being able to kill him), but Wise then Mutilated it off the board and used Morbid Hunger to gain some life and get out of Eruption range.

Wise then got off a fairly brutal Haunting Echoes, nailing all Rubin's Psychatogs and leaving him with nothing but burn spells as his route to victory. Rubin dug valiantly through his library with Compulsion and used Upheaval to slow down the Nantuko Shade beats, but in the end he came up one burn spell short and Wise took a marathon first game. 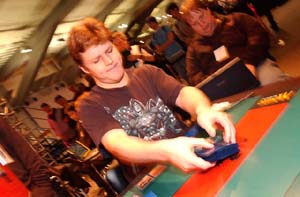 Game 2 was much shorter – Rubin piled out Wise's deck and the count came up wrong. Wise reached for his sideboard, counted out only 13 cards and announced "I am the biggest scrub of all time." Presenting an illegal deck earned his a game loss, a warning, and they reshuffled for game number three. Wise spent the next few minutes muttering to himself "what was I thinking?" and then tried to concentrate on game 3.

Rubin had to mulligan before game 3 and he spent the early turns of the game trying his best to look helpless. He winced at each filter-land he played and put his head in his hands before making simple decisions like Edicting away a Braids. The result of all this was that Wise walked right into Divert. Mind Sludge you? No, Mind Sludge you! Wise sent his entire hand into his graveyard as the crowd gasped. Wise top-decked a Skeletal Scrying, though, and that got him right back into the game. His new cards included another Mind Sludge, and this one resolved, clearing Rubin's hand. Once again, the game came down to Rubin digging madly through his library with Compulsion, looking for burn because Wise was only at 5, while Wise tried to find a Nantuko Shade and keep it on the board long enough to win him the game. Also similar to game 1, Wise and his Nanuko Shade were victorious.