Round 14: A Good Man, and Thorough 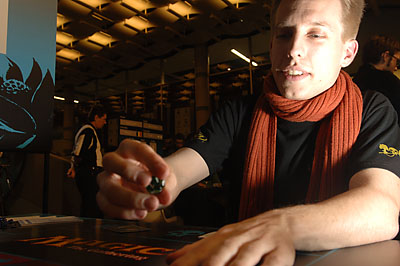 Rogier Maaten has started 2007 off right.his elimination match of two of the very good men on the Pro Tour features two men looking for their first Pro Tour Top 8. Normally known for designing innovative Constructed decks for himself and Pierre Canali, Wafo-Tapa has impressed this weekend with his command of Limited. Across the table is former Dutch National Champion and secret Euro super soldier Rogier Maaten. Rogier is coming off a rather rough 2006 in which he didn't even crack the Level 3 barrier after being Level 4 a season before, but 2007 seems to be starting off right. The winner of this match will likely be able to draw in the final round and come back Sunday to draft one final time.

Rogier led off the match with a suspended Durkwood Baloth followed by Spinneret Sliver, while Wafo-Tapa's first play was Yavimaya Dryad. Rift Bolt dispatched the Dryad, but a flashed Ashcoat Bear a turn later traded with the Sliver. Maaten kept the pressure on with Sporesower Thallid, but Wafo-Tapa staved off any beats by plopping a Might Sliver on the table to keep overzealous fungi at bay. At this point, Maaten peered into the future and suspended Phthisis, figuring he would need it somewhere down the road.

Fledgling Mawcor hit play for Wafo-Tapa just before Maaten's Baloth unsuspended and was shipped immediately into the red zone. Wafo-Tapa added Moorish Cavalry to the board and stabilized, while both players continued to be glutted with land for a few turns. Finally, Maaten played Mirri the Cursed and bashed unabated, and Pthisis bombed the Cavalry a turn later to let Maaten attack for the win.

Maaten mulliganed to five, but then decided to return the favor on turn one by suspending Mindstab. Guillaume suspended Duskrider Peregrine on his turn two, and then the two players traded removal for creatures for a bit as Maaten hoped he could hang on long enough to reap his Mindstab advantage. He did, aided by the fact that Wafo-Tapa kept at least one extra land in hand to discard, losing it, Thallid Shell-Dweller, and Fury Charm. The Peregrine began to beat down for the quiet Frenchman, but it was pacified in a very Greenpeace way by Utopia Vow. Whitemane Lion fixed that, as Maaten flashed back both of his Strangling Soots to kill some weenies, but Rogier eventually capitulated to Jodah's Avenger and a Peregrine reprise. 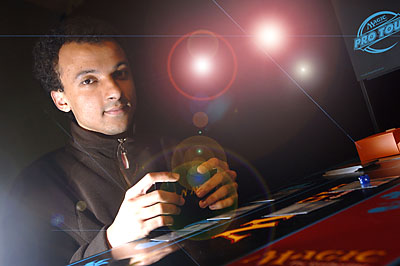 Guillaume Wafo-Tapa, better known for his Constructed chops, has reason to look confident.

Rogier opened with seven cards this time, casting Mire Boa on turn two and a morph on turn three. Wafo-Tapa was doing fine on his side, casting Yavimaya Dryad and then Sunlance to kill Maaten's morphed Fortune Thief. Poultice Sliver stepped into the breech to staunch the flow of blood from Maaten's Boa beatings while Maaten used Mwonvuli Acid Moss to set Wafo-Tapa back a turn and accelerate himself.

A kicked Ana Battlemage from Wafo-Tapa then firmly swung the game in his favor, forcing Maaten to discard Muck Drubb and then Pthisis, opening the way for Castle Raptors. Maaten struck back with his second Mire Boa, looking to win the race with the life totals 20-10 in his favor, but Wafo-Tapa again had the answer, this time coming from a very welcome Teferi's Moat on green. Ewwwww. Riftbolt on the tapped Raptors looked like it would buy Maaten some more time, but Whitemane Lion trumped that, and Rogier was finally out of gas. A few more draw steps yielded no answers to the growing French army, and Maaten conceded, probably giving Wafo-Tapa his first berth in a Top 8.