readers of the Magic website Brainburst, it seems like Paolo Vitor Da Rosa has been writing forever, but in reality he's only an 18-year-old college student from Brazil. He was in contention for a Top 8 slot in Hawaii right up until the last round, and is once again in the hunt here in Prague, proving at least when it comes to Magic, he swings both ways. Da Rosa's opponent is the ubiquitous Frenchman Olivier Ruel, who hasn't been outside a Top 8 hunt in the final rounds of a Pro Tour since about the time the Mayflower landed.

The first spell of the game was Silhana Starfletcher from Ruel followed by a Tidewater Minion a turn later. Da Rosa cast a Greater Mossdog on his own turn, casting a Demon's Jester a turn later, but Ruel had Douse in Gloom for it. Ruel's development went exactly according to schedule, but Paolo had been slowrolling Kindle the Carnage, getting a five for three when he discarded Skarrgan Firebird to the massive burn spell. Ruel's face fell when he saw how poorly fate had treated him, but two turns and two Coiling Oracles later, he had four creatures in play to Da Rosa's two, a Stinkweed Imp and Sadistic Augermage. Gleancrawler a turn later, however, made the French master squirm a little. 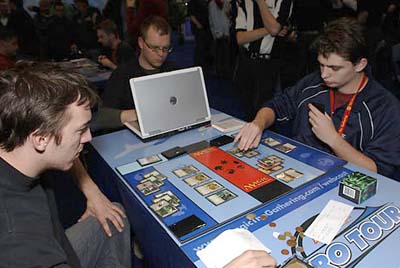 Olivier was wearing a groove in the feature match pit, finding himself there more than half the time in Prague.

Gleancrawler was only able to hit once before Ruel smashed it with Cytoshape, again
reshaping the game to his advantage. A swing with the team brought Da Rosa to 9, and Olivier dropped the hammer, casting Moroii behind it. Da Rosa wasn't done either, taking out most of Ruel's team a turn later with Pyromatics and Douse in Gloom plus a block from Stinkweed Imp on the Moroii. A dredge war of attrition kicked off between the two players as Stinky battled against Shambling Shell and an Enigma Eidolon for Ruel. The battle went on for some time before Ruel's library clock finally won out, and Da Rosa scooped up his cards to head into Game 2 with 30 minutes left on the clock.

Ruel sided in Rise // Fall and Dimir House Guard between games, saying it was worse for his mana base but better for the deck.

Game 2 in this match wasn't even a game. Da Rosa parised to six and then couldn't find more than three lands, while Ruel curved out, hitting Coiling Oracle, Silhana Starfletcher, Cytoplast Root-Kin, Dimir House Guard. A little smashy-smashy, and Da Rosa was once again assured the fear of finishing a win or two short of the Top 8, just like in Hawaii.