Round 14: Hans-Joachim Höh vs. Robert McKeon 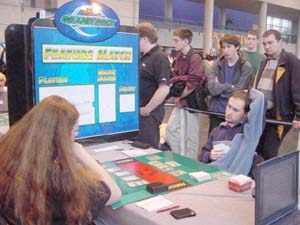 Hans-Joachim Höh is a German player with a previous best of a 32nd finish at GP Antwerp. He's also been on the tour a couple of times without much success. Rob McKeon is an experienced Irish player who's played on the tour a lot but without finding much success. With 31 pts each both are just two wins away from the top 8.

Höh is running Rebels while McKeon is playing the Aluren combo deck.

McKeon thought for a long time about keeping his starting hand before deciding to do so. Höh came out of the blocks quickly with turn 1 sergeant, turn 2 Whipcorder and then a True Believer and Mother of Runes on turn 3.

McKeon cast Living Wish for a City of Brass then tried to cast Cabal Therapy, forgetting about the True Believer's ability.

"You can look for Meddling Mages in your own hand" – Höh.

"Maybe I should have looked at the new set" – McKeon. 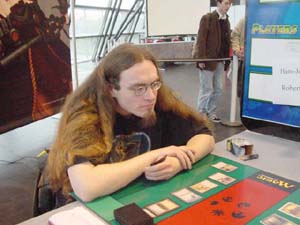 A bit fazed McKeon cast Cloud of Fairies to try and soak up the extra mana but tapped too many and mana-burned anyway.

Höh forced him into a situation where he needed to go off or die. McKeon Intuitioned for Aluren but he needed to draw a forest because he was only down to 1 life.

"Yep, I die to mana-burn," McKeon said packing up his cards for game 2.

McKeon went first and had to mulligan. He managed a quick turn 1 Birds of Paradise and followed it with a Hickory Woodlot.

Höh opened with a Ramosian Sergeant and then a Seal of Cleansing to make things awkward for the Irishman. A Whipcorder was added to the assault. 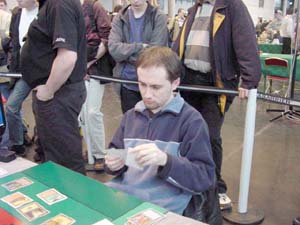 McKeon Intuitioned end of turn, fetching a Cavern Harpy. He then complicated things for the German by casting a Pernicious Deed.

Höh Brainstormed in his turn and shuffled the unwanted cards back into the deck with a Flooded Strand. He didn't find anything useful, tapping out to make Divine Sacrament.

The way seemed clear for McKeon to drop Aluren and go off. Höh wasn't done though. McKeon dropped Wirewood Savage but in response to the Cavern Harpy coming in Höh used the Aluren to bring in a Gilded Drake and steal the Savage. McKeon had a second Savage though and it looked like the game would get very complicated. But the German had managed to draw a second Gilded Drake off the stolen Savage and suddenly McKeon's combo was all busted up as both Wirewood Savages were on the wrong side of the table. Parallax Wave appeared to whip away the Drakes and then it was all over for the Irishman.