In Round 14, both Luis Scott-Vargas were in a position to push for a place in the Top 8. On 10-3 records, they would each have to win out to play for the trophy. By the end of the round, one of them would know that they were going to be playing in the Grand Prix on Saturday.

Luis was on the play, but it was Stoll who had the first play of the game, in Steppe Lynx that cracked in for two on turn two. A Mana Leak stopped Plated Geopede, after which Luis played Stoneforge Mystic to fetch Sword of Feast and Famine. That left just one mana open for Scott-Vargas, which he spent on a Spell Pierce to hold off an Adventuring Gear from his opponent. Stoll contented himself with attacking for two, and casting a second Adventuring Gear. Luis knew that the biggest danger for his deck was a fast Boros start putting him in range of a burn finish. 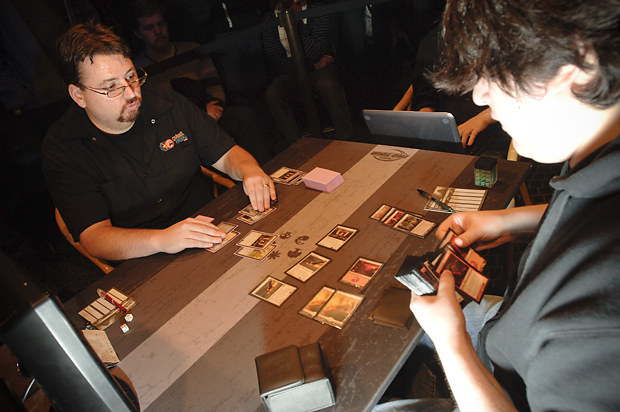 Luis Scott-Vargas and Kyle Stoll both have a shot at the Top 8 here in Paris.

That second Gear meant that Steppe Lynx was able to smash in for 8 damage thanks to a timely Arid Mesa activation from Stoll. Luis was at just 8 when he put Sword of Feast and Famine into play using Stoneforge Mystic's ability. Luis got to hit for 3, forcing a discard, before he cast Jace, the Mind Sculptor to bounce Stoll's only creature.

The planeswalker was killed by a Forked Bolt, but soon replaced by a second, and bounce before combat meant that Luis was able to force Stoll to discard that Steppe Lynx. When Luis started casting copies of Squadron Hawk, things looked bleak for Stoll, who had not been able to get quite the fast start he might have wanted. Gideon Jura joined Jace, and soon Stoll was scooping up his cards.

A turn-one Adventuring Gear from Stoll was the start, and soon he had a Squadron Hawk to hold it. Scott-Vargas, unperturbed, cast a Ratchet Bomb. A fetch land meant that the first Hawk attack was for 5, putting LSV to 15, after which the Stoneforge Mystic wars began. Stoll fetched a Bonehoard from his, while Scott-Vargas had a Sylvok Lifestaff to find. He popped his Ratchet Bomb for 1, blowing up Adventuring Gear before playing the equip. 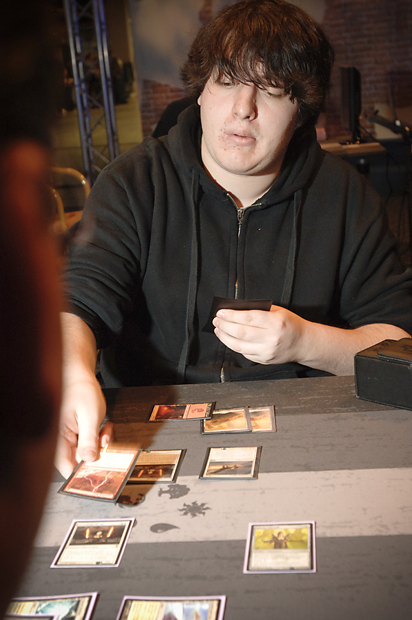 You wouldn't Bolt a kor with glasses, would you?

Stoll had Lightning Bolt to clear the way, and bashed LSV down to 13. He cast another Squadron Hawk, and resigned himself to the air force getting it done when LSV popped down another Stoneforge Mystic, which with Sylvok Lifestaff could hold the ground quite well. A Tectonic Edge from Stoll held off Celestial Colonnade, and when LSV swung back with his Mystic (now also holding Sword of Feast and Famine), Stoll was quick to block with his Mystic, that put into play Bonehoard. Stoll's team was enough to take the second game, and force a decider.

Luis was on the play for the decider, which meant he was able to get Ratchet Bomb online all the sooner. He then bought quite a bit of time, with not one Oust on Steppe Lynx but two. By the time Stoll finally got the Lynx to hang around (and equip it with Adventuring Gear), Scott-Vargas was casting Stoneforge Mystic for Sword of Feast and Famine, and then casting the Sword itself.

After a little thought, Kyle cast Koth of the Hammer, used a Lightning Bolt on LSV's only creature, and got stuck in to take LSV to 14. The planeswalker didn't last long, as Scott-Vargas could attack it with Celestial Colonnade, but Stoll didn't seem to mind. He followed up with Hero of Oxid Ridge, a card that Paul Rietzl (also playing Boros this weekend) had described as 'the new Ranger of Eos' for its ability to be a great topdeck in red/white decks.

LSV got attacked to one, and played Gideon Jura in an attempted to stabilise. He was able to use Ratchet Bomb to get rid of Stoll's four drop, but was in rough shape when he saw a Koth of the Hammer and Spikeshot Elder from Stoll.

"I'm all in," remarked Stoll, who was out of cards in hand.

LSV struck with Day of Judgment, before using Gideon Jura to attack Koth. Suddenly the fight back looked interesting. A full four copies of Squadron Hawk came down for Scott-Vargas in short order. 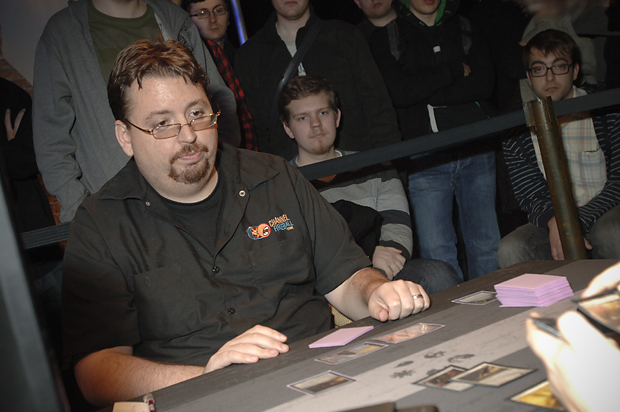 LSV: Among the least plussed people on the planet.

Kyle was in a desperate position. Needing just one damage, he cracked a fetch land to help thin his deck. He didn't draw a burn spell, but did find a Squadron Hawk, which in turn found three more. It didn't look that this would be enough though, as Gideon Jura remained a clear threat, and a Sylvok Lifestaff ensured that LSV would be able to gain some life back when Stoll's Hawks were forced to attack.

Stoll played Stoneforge Mystic and a Bonehoard, but could not do anything while Gideon was around with so much loyalty. The untapping of lands meant that Celestial Colonnade was also able to rush in for damage without crimping Scott-Vargas's mana. With each successive draw, Stolls position looked more uncomfortable, and LSV's attacks more devastating. The Boros deck had got perilously close, but it was Luis Scott-Vargas who closed it out.