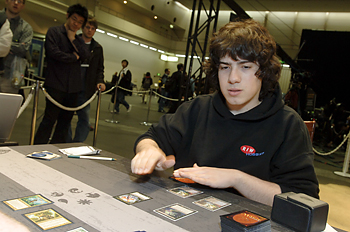 Michaganian Ari Lax makes a run at the Top 8.”High roll?” Lax asked Robinson as he shook the dice in his hand. When the dice finally hit the table, his head soon followed, but the resulting tremor failed to move the dice from the snake eyes he had rolled.

Despite this match having a Top 8 berth on the line, the players remained fairly jovial, exchanging quips back and forth as they shuffled. After a bit of banter about their deck choices and what they may or may not be playing, Robinson opened the first game with a Birds of Paradise followed by a turn-two Doran, the Siege Tower. Lax made his own trademark second-turn play: Bitterblossom. As he pulled out a stack of what had to be like fourteen Spirit tokens, he joked, “As you can see, I really was going to play Red-White.”

Robinson attacked Lax down to 15 with his Doran before playing a Rhox War Monk. Lax got his first of many blockers from the Bitterblossom and passed the turn after drawing and playing a land. Robinson activated the Treetop Village he had played on the previous turn and sent his team in. Before blockers, Lax decided to play a Vendilion Clique, targeting Robinson. Before letting the ability resolve, Robinson used a Path to Exile to remove the Clique from the game. The hand he revealed contained nothing but a couple of land. After the dust settled, Lax was dropped all the way to 7.

On his turn, Lax went through the same motions as before: draw, land, go. When Robinson tried to attack for the win, Lax used a Cryptic Command to Ice his whole team. That bought him another token, and a little more breathing space. His Bitterblossom was taking its toll now, though, and his life dipped down to an insignificant 5.

Robinson went for the kill one more time, and this time Lax had another Vendilion Clique to block all of Robinson’s creatures, as well as a Agony Warp to kill the Treetop Village. That let him Fog the turn one more time and set himself up to get back in the game. After dropping to 4, he dropped a Loxodon Warhammer into play and passed the turn with one creature and a couple mana up. When Robinson came across with his Doran and War Monk, Lax flashed in a Spellstutter Sprite and used it and the Faerie token from his Bitterblossom to give him yet one more turn. After combat, Robinson added a Rafiq of the Many to his team.

Lax passed his turn without doing anything, just choosing to sit back on his Faerie Conclave and Bitterblossom token for one more turn. During Robinson’s upkeep, he flashed in a Mistbind Clique to tap him down. After a messy combat step, Robinson reduced Lax’s team to absolutely nothing. The game only lasted one more turn, with Lax muttering to himself that he’d made a mistake. 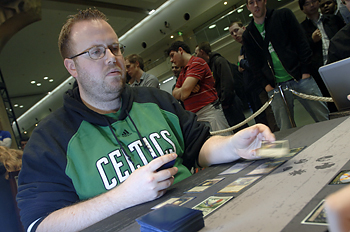 Brian Robinson’s deck sports Rafiq, Doran, Rhox War Monk, and other goodies.Lax came into the second game with the “all-star” Bitterblossom, following it up with a Loxodon Warhammer. Robinson failed to make a second-turn Doran, the Siege Tower this game, but he did manage to get a Rhox War Monk in its stead. Following hot on the Monk’s heels was a Tidehollow Sculler to steal a Sower of Temptation before it could coerce any of his creatures to join the dark side. That left Lax with a Plumeveil, Mistbind Clique, and Spellstutter Sprite in hand. Joining the Sculler on the table was an innocently dangerous Scattershot Archers.

Lax drew his card and announced a “main-phase” Mistbind Clique, removing a token from the game.

“Do you got it?” Lax asked as he passed the turn to Robinson.

I’m pretty sure that exchange was Lax’s attempt at a real-life Cryptic Command, but Robinson was apparently ready with a Guttural Response. If the “it” to which Lax was referring was a Rafiq of the Many, Robinson did indeed have it. The kingmaker general gave the Monk the extra power needed to sail past the Mistbind Clique to vastly swing the life totals. The Scattershot Archer made sure that the sky was free of tokens as well.

During his next turn, Lax merely equipped the Clique with his Warhammer and passed the turn. Robinson added another exalted creature to his side: the Noble Hierarch. A second Tidehollow Sculler drove the last nail in the coffin, stealing a Cryptic Command out of Lax’s hand. At this point, Lax just dropped the remainder of his hand on the table and shook Robinson’s hand.

“I punted both games. I don’t know if I could have won there by just attacking. But that first game ....”