Round 14: Hiroaki Hoshino vs. Kohei Yamadaya 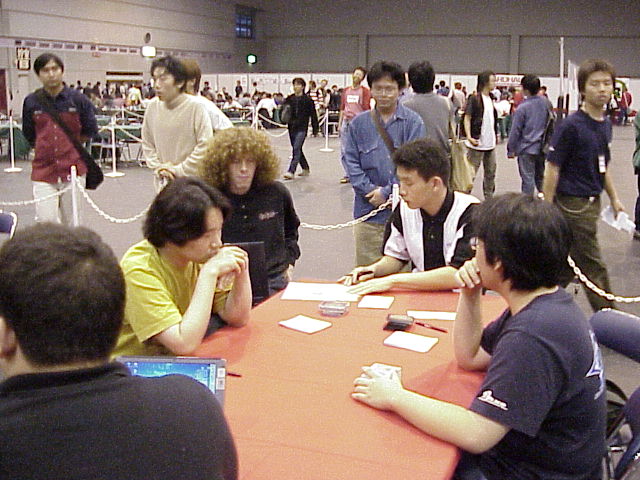 The two are not known, as many are, for strong finishes, or vaunted skills. Instead, Hiroaki Hoshino and Kohei Yamadaya are known for their sportsmanship and overall pleasant attitude towards the game. That, and their passion for money draft. This was evidenced by Hoshino's team name at Pro Tour New York: Cycle Money Draft

The first game was slow going. The only action by turn three was Yamadaya's Pilgrim of Virtue. Stuck on three lands, he was unable to heat things up further. Fortunately for him, Hoshino's four lands gave him no play, and so he was free to find a fourth land on the next turn.

Now the ball was rolling. Treetop Sentinel was followed by Aven Archer and Aven Fisher. Hoshino sat around with a very ineffective turn-six Werebear. Krosan Avenger and Nantuko Disciple came too late, and he scooped to the air force.

Game two was Hoshino's chance to shine. He started with Krosan Avenger, then steamrolled a Pilgrim of Justice with Muscle Burst. Yamadaya had another Pilgrim, and tried the trade again, only to see Muscle Burst number two. The trample damage alone had him at thirteen.

Hoshino made a Werebear, but looked at Yamadaya's five untapped mana and had a feeling that said "Second Thoughts". The Werebear went in alone, adding a Springing Tiger to his team. Unfortunately for him, there was no Second Thoughts. There was only Kirtar's Wrath. It was only after Hoshino tried to rebuild with Nantuko Disciple that Yamadaya drew the phantom spell. 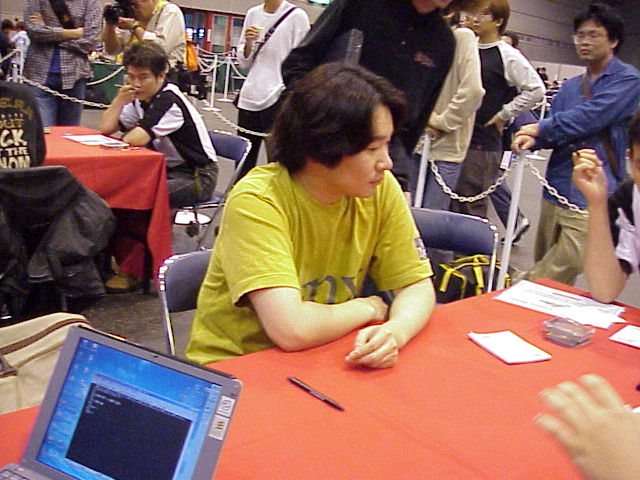 Hoshino pre-empted that bit of programming with a dangerous bit of sideboard technology: Price of Glory. Spectators practically fell over in amazement. Now all of Yamadaya's best spells would leave him unable to play more. Yamadaya blew his Aether Burst on the Disciple in response.

Still, Yamadaya was pretty brutalized. He Scrivenered up the Burst, but things were not looking good. The Disciple reappeared. Aven Fisher tried to make it a race, but Yamadaya was behind on life. Hoshino continued to draw fire, busting out Braids, Cabal Minion.

They traded hits for four, but that wouldn't lead to a Yamadaya victory. He was drawing lands, far too many of them. He lost a lot of lands protecting himself with Embolden, but Hoshino dropped another two creatures, and the race became unwinnable.

Hoshino mulliganed in the deciding game. He bounced back with twin Werebears, for the time being held back by a Pilgrim of Justice. Krosan Avenger heard about Hoshino's party and decided to stop by. Yamadaya played a fifth land and tried to pretend like he wasn't holding Second Thoughts. Hoshino refused to attack. 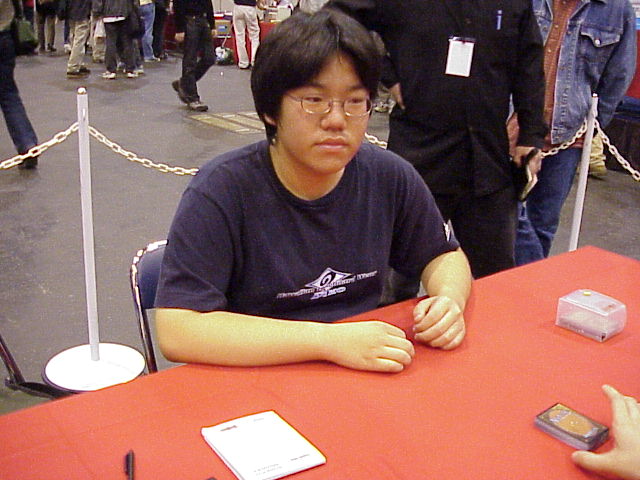 Yamadaya's defenses were strengthened by Beloved Chaplain. Hoshino knew from the first game that he couldn't wait things out; there were bound to be fliers. Still, he didn't have the tools to overcome. Treetop Sentinel confirmed his suspicions.

Hoshino tried to Afflict the Chaplain, but Yamadaya was ready with Aether Burst. When Hoshino made no further play Yamadaya decided it was go-time. He dropped the Chaplain and Aven Fisher, starting the beats. Hoshino's Gorilla Titan did little to dissuade him. He swung for five and Scrivnered up an Aether Burst. Holding two Emboldens and Second Thoughts, he feld pretty safe. In two turns he had won the match.