Round 14: Hiroto Watanabe vs. Kenichi Fujita 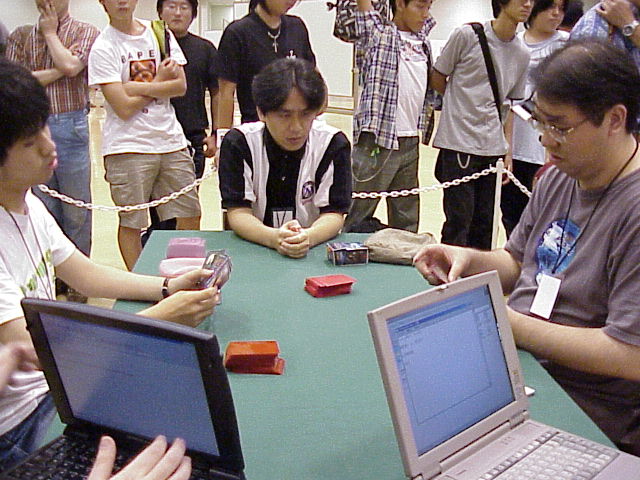 Grand Prix Kobe has proved that the Invasion Block Constructed format is all about tempo, as Hiroto Watanabe and Kenichi Fujiya displayed in spades. Both players were running the red-green-blue "BBB" (Bears, Bounce, Burn) deck. The Bears (Gaea's Skyfolk, Blurred Mongoose, Kavu Titan) rush in to do the early damage. Repulse and Temporal Springs cover bounce. Neither Watanabe nor Fujita packed the Springs, however, preferring to focus on the Burn (Urza's Rage, Fire/Ice, and Prophetic Bolt). While both were knocked out of Top 8 contention with their 9-4 records, the winner would still have a strong shot at finishing in the money.

As conventional wisdom states, most mirror matches are determined by equal parts skill and luck. Today's participants had no shortage of the first factor. Kenichi Fujita, Tokyo resident and winner of 2 Limited Grand Prix (and no relation to this year's PT Tokyo winner, Tsuyoshi Fujita), has achieved the apex of big tournament performance and hungers to stay with the pack. Hiroto Watanabe, hailing from Sendai, finished second at 2000's Asia-Pacific Championship.

Fujita came to the table laughing and chatting, joking with the judge and Sideboard reporter. Watanabe smirked and buckled down to the task at hand. His game face's fixture pleased fate, which gave him the Jan-ken-pon win. In this matchup, going first gave Watanabe a huge advantage. But Watanabe stared at his hand of 2 Repulses, Mountain, Shivan Reef, Kavu Titan, Jade Leech, and Gaea's Skyfolk. Placing himself in fate's hands again, he mulliganed into a hand with 2 Kavu Titans, a forest, island, Shivan reef, and Suffocating Blast. Satisfied, he played a Titan and went to work.

The pressure was on for Fujita, who Repulsed one of the Titans back home. But the Titan brothers refused to take a nap and came out the following turn. Fujiya passed a turn, and Watanabe's pair of Titans attacked. Throwing counter backup to the wind, Fujiya cast a Mystic Snake and blocked to reduce Watanabe's offense. Fujiya untapped and unleashed Urza's Rage at the remaining Titan, Disrupting it to cycle deeper into his deck. At the end of Fujiya's turn, Watanabe leveled a Prophetic Bolt at Fujita's head, bringing his life down to 10 and into kicked Rage range. Fujita untapped and played a third Kavu Titan, kicking it with full force. But Watanabe showed that he too was down wid' da kicker contingent, kicking up the game's fourth Kavu Titan.

Fujiya could have taken a risk and attacked with his Titan, but kept it home to cover him. Watanabe immediately sent his 5/5, and Fujiya's blocked for the trade. A Repulse would give major card advantage for the caster, but none were forthcoming. Watanabe then used Fact or Fiction to enlarge his hand, taking the proffered pile of Mystic Snake, Exclude, and a forest over Jungle Barrier and another Fact or Fiction. He then untapped and summoned a Gaea's Skyfolk. Fujita answered with his own Skyfolk. The flying fish then took turns hitting their master's opponents for two until Fujiya was at 6 while Watanabe sat at 14. Finally Fujita kept his Skyfolk home and fish killed fish. Smelling a victory, Watanabe threw another Prophetic Bolt at Fujita, who lacked the counter. An additional Fire sealed Fujita's doom. 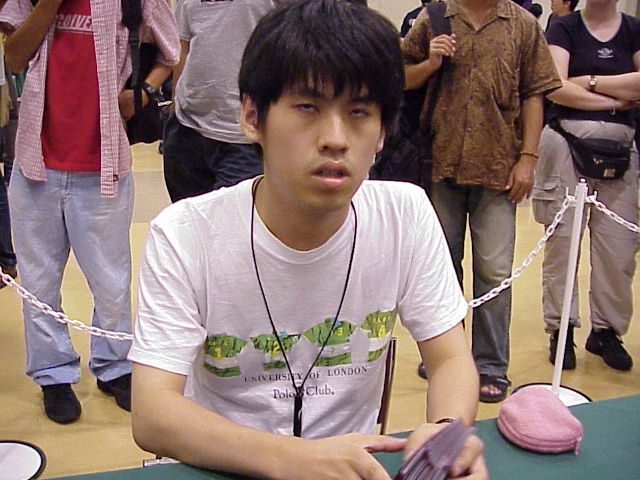 All this action took place at a blindingly fast pace (eight minutes), and the sudden break in the match's tempo shouted out silently as the two players surveyed their sideboards. Fujiya added the obligatory Gainsays along with Jungle Barrier and Excludes. Watanabe also added Gainsay and Jungle Barrier, and also included 2 Shivan Wurms. Surprisingly slow in a tempo deck, the Wurms could punch through both Jungle Barriers and Kavu Titans with near-guaranteed impunity.

Game 2 started with a delayed explosion as Fujita failed to drop a threat on turn 2. Watanabe threw down an unkicked Kavu Titan, and Fujita retorted with a Blurred Mongoose. Both players slowed down their game to consider the board as Watanabe's Titan attacked. Fujita blocked it to trade, and played a Gaea's Skyfolk the next turn. Watanabe offered his own Blurred Mongoose, and then Fujiya played a Jungle Barrier. Watanabe didn't have the mana to Exclude it, and the 2/6 obstacle loomed over his chances for a quick victory. Fujiya let him cast an unkicked Kavu Titan.

Despite drawing and playing another Blurred Mongoose, Watanabe knew his army alone would never be able to do the job. He settled for Urza's Raging Fujita's Skyfolk and settled in for a long, difficult game. At this point both players knew the path to victory would be lined with burn spells.

Fujita's stock rose dramatically as he successfully cast a Fact or Fiction at the end of Watanabe's turn. The came down as Blurred Mongoose, Urza's Rage, Jungle Barrier, and 2 land. At this point Watanabe made what in this reporter's view was a horrible mistake by putting the Mongoose in one pile, and the other cards in the other. Fujiya scooped up the larger pile without a moment's hesitation. He played a Mongoose from his hand, and used a timely Disrupt to counter Watanabe's desperation Prophetic Bolt to the head.

Watanabe tested Fujiya's countermagic reserves by playing a Gaea's Skyfolk. Fujiya offered up the expected Exclude, which was countered by a Mystic Snake. Watanabe's expectations for the Skyfolk were dashed with a Fire. Fujiya played his 12th land, and passed the turn. Watanabe muttered that he smelled Urza's Rage in quantities of more than one and Fujiya did not fail to prove Watanabe's prediction. 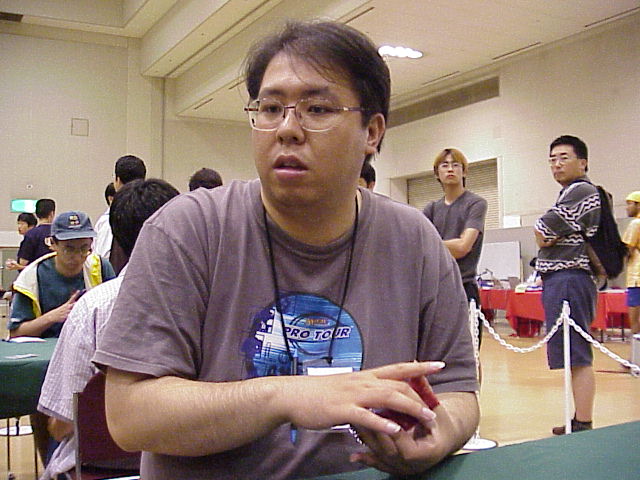 After the sturm und drang of Game 2, both men were visibly fatigued. Game 3 was fairly straightforward. Watanabe played first and played bear after bear for the first 6 turns, each of which met with a blocker or burn spell. Both let their single surviving Gaea's Skyfolk lower their opponents' life total, with Fujita slipping to 7 and Watanabe to 12. Fujita then kept his flying bear home, and let it trade for Watanabe's.

Depleted of creatures, Watanabe then went for burn with Prophetic Bolt, but again Fujiya had the Disrupt. A burst of countermagic erupted over a Fujita Jungle Barrier, with Fujita winning. He then played a second Barrier, displaying a defense that towered over Watanabe's lowly Mystic Snake and Blurred Mongoose. Watanabe's Shivan Wurm, gating the easily recastable Mongoose, suddenly rattled Fujita's confidence. He quickly Fired from the hip at Watanabe, and Fact or Fictioned into two piles of cards that lacked Urza's Rage. Watanabe's Wurm knocked down one of his Barriers, and Fujita's emotional state shook at impending death. Fujita's luck pulled through however, and gave him the Rage he longed for. After a deep gasp, Fujita's relieved laugh broke the tension. A short burst of applause from the spectators was well deserved.