Round 14: Itaru Ishida vs. Chris Nadebaum

The winner of this match can hopefully make top 8, the loser will be hoping for a top 16. Itaru is playing a mostly mono black deck with some red in it. He managed to get himself a 6th pick Promise of Power and a Mindslaver.

Chris has a White/Blue deck with a lot of creatures as well as an Isochron Scepter with instants like Raise the Alarm, Awe Strike, Razor Barrier and Annul.

Chris played Itaru in the previous draft and Lost 1-2, and is now looking to even the score. 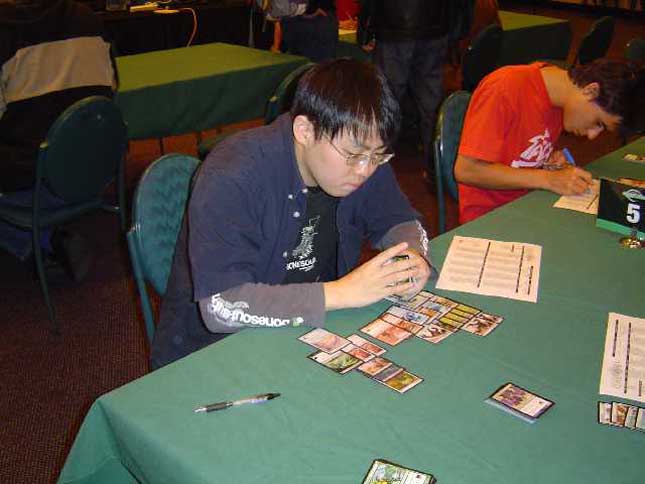 Itaru's first play was on turn three with a Krark-Clan Grunt. Itaru then played a 0/1 Nim Shrieker and attacked for two. Chris could only attack, with a Raise the Alarm and two Razor Barriers in hand.

Itaru gave the shrieker some power by playing a Steel Wall and a Cathodion, Chris traded his Raise the Alarm for the grunt.

Itaru had another shrieker, and played out 2 more artifacts. Chris drew nothing to deal with the one toughness flyers and went to his sideboard for game 2. 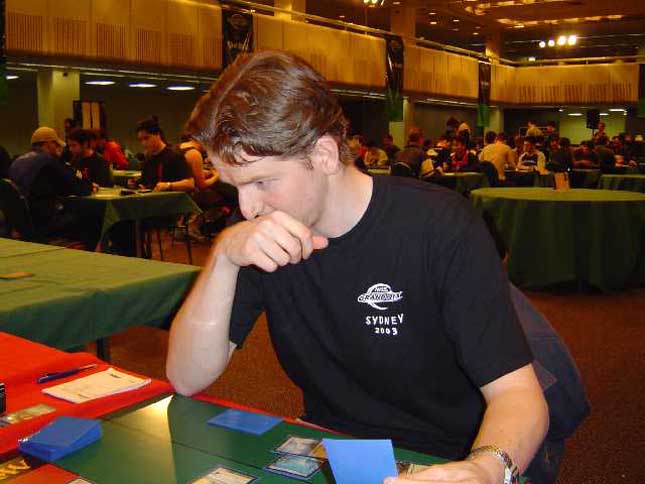 Chris started off aggressively and started to attack on turn 3 with his raise the alarm tokens and played out a Soldier Replica. Itaru played a Wizard Replica which got bounced with an AEther Spellbomb. Itaru replayed it on his next turn. Chris played a bargain priced Somber Hoverguard, for only 5 mana. Itaru had a Frogmite which was only two mana and a Grunt.

Itaru's next turn was a Promise of Power for a 5/5 flying Demon. Itaru attacked with it and Chis traded his Soldier Replica and his Hoverguard for the Demon.

Chris laid some creatures that looked like they would be able to get through Itaru's army, a Goblin War Wagon and a Soldier Replica. Itaru brought down the bomb of a Mindslaver, using it to attack himself with everything, sacrificing the soldier to kill the wagon. Blocking the tokens to clear all of Chris's creatures and using a Razor Barrier on a land to empty Chris's hand.

Chris Shook Itaru's hand and wished him luck in the Top 8.