Round 14: It's All About Timing

days of play … 14 rounds of grueling competition … all leading to this final round to determine which of these highly talented teams would be playing on Sunday at Pro Tour-Charleston. The nervous energy filled the air, as both teams were well aware of exactly where they stood: Win and keep playing, lose and call this tournament finished. Kajiharu80 was especially excited to make it this far. They had come into the day a 4-3 and needed precisely a 7-0 on Day Two even to have a chance for Sunday.

While the sentiment between the two teams was cordial, very little was said. Partially this was the language barrier; Schere Stein Papier hailed from Germany and Kajiharu80 was a Japanese grouping. Mostly though, each player was just focused on the upcoming fight. Who needs small talk? Every player was thinking exactly the same thing: Win this round!

Simon in seat A was playing a blue-white-red control deck with an enchantment sub-theme, starting Dream Leash, Faith's Fetters and Copy Enchantment. His opponent was playing a mid-range blue-green-black deck, counters and Caryatids leading of course into Simic Sky Swallower.

In the first game Simon was content to draw cards and play mana while Tomohiro was stuck playing nigh-useless Carven Caryatid. Under no pressure and unconcerned with walls, Simon continued to build his mana with Signets and his hand with Compulsive Research. Court Hussar, one of the most popular cards in Day Two decks, gave Simon even more options. 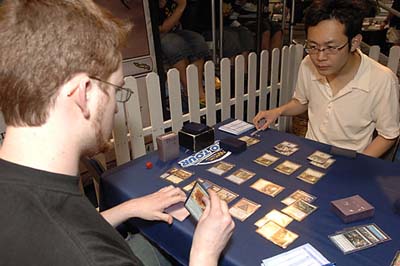 Tomohiro Kaji and Simon Görtzen had a long game ahead of them.

Tomohiro's first threatening move was a Grave-Shell Scarab, which quickly received a Remand. With Tomohiro tapped low, Simon was free to play Firemane Angel. Firemane stayed safe in the clouds, flying over the two Caryatids and later a third as Tomohiro searched for an answer. No such card became available and Simon kicked off a game lead for Schere Stein Papier.

The middle matchup had Harald with an aggro green-blue-red deck against Shota's more controlling blue-white-black. Harald started off well with Utopia Sprawl into Vinelasher Kudzu, his land drop still available. The Kudzu received a Remand and Harald briefly considered skipping his second land to boost Kudzu later. Coming to his senses, Harald dropped a tapped Breeding Pool and passed. Shota's third-turn Court Hussar found Grand Arbiter Augustin IV, a rather vicious tempo booster this early in the game. Harald tried to hang on with multiple Vinelashers, but each was killed in turn while the 2/3 and 1/3 continued to attack.

Harald continued with Utopia Sprawl and Farseek, adding to his mana and hoping to get under the thumb of the Grand Arbiter. At 11 mana and 6 life, Harald tried an eight-mana Simic Sky Swallower. Shota tossed out a cheap Remand and when Shota tried a Voidslime, was reminded about the 2/3 "Sphere of Kicking a Man When He's Down" effect. SSS's second attempt to see action was also denied and Harald packed it in.

Simon calculated that was a good turn to cast Punishment, wiping out the two card-advantage engines. Every time Tomoharu needed a good draw, or Simon to have a bad one, he would slap himself to the consternation of the medics standing by. Masochism didn't help Tomoharu on his next turn, as all he could muster was a Rakdos Guildmage.

The following draw did reveal his third land and Skyknight Legionnaire and Guildmage came crashing in. Simon cast a Congregation at Dawn and found a pair of Loxodon Hierarchs and Civic Wayfinder. Tomoharu correctly predicted Civic Wayfinder the last card on top, to the amazement of the watching judges. Hey, these are pros, folks.

Both elephants took a Hit, undoing their good works. Civic Wayfinder came down but Simon was already starting to look dangerously low in life. Tomoharu's Lyzolda and Guildmage died to a pair of Putrefies with Simon ending on a Skeletal Vampire to negate the Skyknight.

With both players at 8 life, Simon brought his forces in, threatening lethal damage without a lifegain spell. Tomoharu thought a long time about his play (slap slap). Tomoharu decided to Lightning Helix Simon, keeping him alive and bringing Simon down to five. With Tomoharu's five mana, he needed a land off the top to cast Demonfire for the exact kill. Unfortunately for him, Simon cast a post-combat Rolling Spoil, causing Tomoharu to be drawing dead. Tomoharu flashed us the land on top of his deck as he picked up his cards for Game 2.

Simon Görtzen's red-white-blue deck found a damage source in Tomohiro's sideboarded Moroii, which quickly took on Faith's Fetters. It looks like they decided to settle the round with draft decks.

Under pressure from his own creature, Tomohiro attempted to lay more threats, but Simon had all the answers. The most dangerous was the mirror-breaking Muse Vessel, which received a copied Faith's Fetters. Simon's Firemane Angel once again came into play, to his teammates' pleasure. At this point, both players had to request a couple of extra pens, due to all the life changes each upkeep.

A Putrefy killed the Firemane Angel before it could do too much damage, but Boros Garrisons plus a stolen Golgari Rot Farm on Simon's side gave him the 10 mana needed to resurrect it. Simon tapping out was the window Tomohiro was looking for, casting a Mimeofacture on the Firemane. A dangerous play to be sure, considering Simon's 10 mana, but Moroii pain needed salving. For a while it worked as both players built up their hands and mana. Tomohiro attempted a Simic Sky Winner which Simon confidently allowed to resolve. 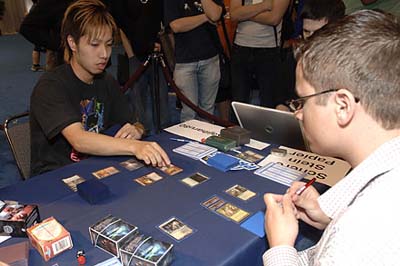 Simon attempted to cast a Copy Enchantment, strongly implying a plan to steal the untapped untargetable 6/6. Tomohiro's Voidslime got Convoluted and Helix killed the remaining flyer. All the creatures come crashing in and all Tomohiro could do was extend the hand. Simon's Invoke the Firemind just earned a sigh.

If the game above seemed lopsided, the second game of the B seat was far worse. Harald was stuck on three lands while Shouta ramped up to seven, ending things rapidly with a double-dosed Angel of Despair. Ouch.

Simon had the pressure on his match, but had to be feeling good up a game. That confidence was diminished somewhat by his mulligan, followed by watching Tomoharu play his turn-two Confidant. A missed land drop meant Bob was going to get at least one reveal in. Simon looked pained while Tomoharu looked pleased. Bob always makes someone happy.

The Confidant did die the following turn but was replaced with Lyzolda, the Blood Witch and another Confidant. Both fell as well, although not before getting in card advantage apiece. Skyknight Legionnaire got played and Simon's chances looked to be dimming. By the time Simon was able to stabilize, a Char, Helix and Seal of Fire sent them to Game 3.

Well, this was it. Perhaps it was because it was late in the day, or perhaps it was the severity of the situation, but the crowd became uncharacteristically quiet as they watched the two competitors shuffle up for their final game. Both players were fully aware of the stakes, as their teammates huddled close. Tomohiro continued to slap his face; doing whatever was necessary to keep his mind completely focused. Simon merely stared at his shuffling cards, just hoping for a fair assortment of spells and mana, perhaps secretly wishing ill on his opponent's final hands.

Simon on the play looked at his initial seven, sighed, and sent them back. A quiet "yeep!" escaped Tomohiro but he recovered his professional demeanor. Simon's second mulligan cracked that image a bit more, when Tomohiro started giving his teammates high fives. Simon did keep the next hand and Tomohiro stuck with his original seven, easily explained when he dropped his third second turn Dark Confidant of the match.

Simon could only expand his mana with a Farseek and hope to draw a fourth. Stuck at the three-mana mark Simon had to pass back, clearly frustrated with the turn of events. Tomohiro untapped (slap), revealed a Sacred Foundry, drew a card (slap), and attacked for two (slap slap). His next play took a bit more time to determine, ultimately deciding on a Fall that was guaranteed to hit two non-lands. Simon sighed and shuffled his grip and laid the cards out. Tomohiro grabbed two cards and flipped them over. The crowd groaned when they saw the cards lost:

Simon drew a land next turn and cast Punishment for two anyway, killing the Bob and tagging a Boros Signet as well. A future Skyknight Legionnaire got hit with a Mortify and all Tomohiro could do was play a land and say go. One had to wonder if Tomohiro's grip was all land or all burn. When both players passed playing anything the next turn, we had the answer.

At 9 life facing a handful of Tomohiro's cards, five mana, and a Seal of Fire, Simon cast an upkeep Congregation at Dawn, finding three Loxodon Hierarch. This reporter already saw trouble brewing, but had to wonder if Tomohiro would see the play. Simon, by trying to get the Hierarchs into play as quickly as possible, had left himself open to Hit + Helix.

Had he waited one more turn, Simon would have had the mana to cast Hierarch and in response to a Hit, sacrifice the Hierarch to its own ability. Simon either didn't see the move or thought it was too risky and cast the Hierarch, tapping out. Simon went to pick up his pen to mark the life change when Tomohiro said "hold, please." A quick glance at the life totals and mana confirmed the math and Tomohiro cast Hit, Lightning Helix and sacrificed Seal of Fire with the lifegain ability on the stack. Simon could only offer the hand and wish his opponents good luck on Sunday.

Team Kajiharu80 screamed, hugged each other, and moved on to Day Three of Pro Tour-Charleston.