Round 14: Jens Thoren vs. Kai Budde 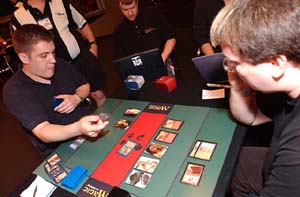 What can you say about Kai Budde that hasn't been said before? Smut peddler! The best player in Magic history is using barely clothed model cards as Verdant Force tokens today, for either his own amusement, to distract his opponents, or to entertain spectators. Budde and his opponent Jens Thoren are two of Europe's best, and at 10-3 have a good shot at making Top 8, especially with a win here. Thoren is playing Sligh while Budde has Reanimator, so the games should be quick one way or another.

Thoren played and tapped a mountain, as Budde wondered, "Lackey?" Unfortunately for Thoren it was merely a Mogg Fanatic, and Budde declared, "You are weak" in his unmistakable German accent. Entomb put Verdant Force into the graveyard, and it hit play on turn two thanks to Exhume. He played Contaminaton on turn three, and smiled. "It's always good to have one of those in the maindeck."

Thoren mulliganed down to four, as Thoren's disbelief and Budde's slightly uncomfortable laughter increased every time Thoren sent his hand back. He opened with a Prospector, and Kai cast Duress with a laugh, seeing Rishadan Port and Mogg Fanatic. Both came out, and after an attack, Thoren sacrificed both his Goblins to bring out Siege-Gang Commander.

Budde- "Not bad for a four card hand."

It didn't matter much, as Budde had Vampiric Tutor and Entomb to get Verdant Force into play with Exhume, and Vendetta killed off the Commander.