Round 14: Johan Kennes vs. Farid Meraghni 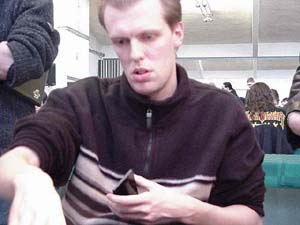 Johan Kennes"My rating in Limited is around 1690. This is only my sixth sanctioned tournament in Limited and the first time I've drafted in a big tournament."

So says Johan Kennes, Belgium's last hope for a local win. Kennes is pretty much assured of the amateur prize but now has a chance to go for the whole pot in the top 8. Standing in his way is the young Frenchman who exploded out of nowhere to win
Pro Tour-San Diego this year, Farid Meraghni.

Meraghni started first and came out typically fast for a green deck, attacking for five on turn 4 with a Seton's Desired Krosan Avenger. A Repel dealt with the Desire and Kennes deck had also started strong with turn 2 Mystic Familiar and turn 3 Cephalid Looter.

Meraghni had come out really really quick. He emptied his hand and the Belgian was facing down two Twigwalker, Anurid Scavenger, Krosan Avenger and a Werebear with only the addition of a Skywing Aven is to his side.

A Floating Shield gave the Familiar protection from green but Meraghni didn't care and charged everything into the red zone. Eight damage crashed through for the loss of one Twigwalker.

All Kennes could do in his turn was replay the Skywing Aven.

Meraghni drew a second card to pitch to the Waste Away and went after Mystic Familiar. In response Kennes used the Looter and returned the Skywing Aven to his hand to give himself threshold and the Mystic Familiar protection from black.

Another charge from the green machine and Kennes had to flashback an Embolden to stay on a fragile four life.

A Chamber of Manipulation looked to buy Kennes time and Meraghni changed tactics with lightning swiftness. He let the Anurid Scavenger die and started to aim towards threshold. A second Avenger was followed by a Crashing Centaur and when Kennes tried to steal the Centaur with the Chamber, Meraghni discarded a card and sac'ed a land to give himself threshold and make the Centaur untargettable.

There was nothing to hold back the green horde this time.

In game 2 the Frenchman kept a very slow hand with only Waste Away, Crashing Centaur and an Egg in game 2. It was the slower blue-white deck that started quicker with Aquamoeba, Cephalid Looter and Hallowed Healer. Waste Away took care of the Looter but Meraghni just hadn't got going as he was soon facing down a Skywing Aven and unblockable Escape Artist. A Crashing Centaur finally appeared on Meraghni's side only to be returned with Dematerialise to let everything though.

A Muscle Bursted Werebear took down a Mystic Crusader.

At end of turn Merghni went to waste away a Skywing Aven to put two extra cards in the graveyard. This bought some time and then the Frenchman started to fight back with a second Werebear and an Elephant Ambush that gave him threshold.

Kennes Repelled it and then sent in everything to do just enough damage to finish Meraghni off.

Meraghni had another poor draw in Game 3 as his only creature was a Laquatus's Champion.

Kennes again took the initiative and started attacking with two Skywing Aven. Then Meraghni got going with an Elephant Ambush at end of turn and a Twigwalker in his own.

Kennes still looked to race with the fliers and brought out an Angelic Wall to hold Meraghni back. A Seton's Desire on the elephant token made it much too large for the Wall to handle but Kennes draw was really good and he Repelled the token to deal with both permanently.

At seven mana the Irridescent Angel came to town and there was no way Meraghni could race that, especially as he still hadn't drawn a black source of mana for the Champion or Waste Away in his hand.

Unfortunately the other results did not go Kennes' way and he was the one player that failed to make the top 8 on 34 points, finishing in ninth place instead. At least he has the consolation of the USD 1500 Amateur Division Prize.