Round 14: Jon Finkel vs. Antoine Ruel 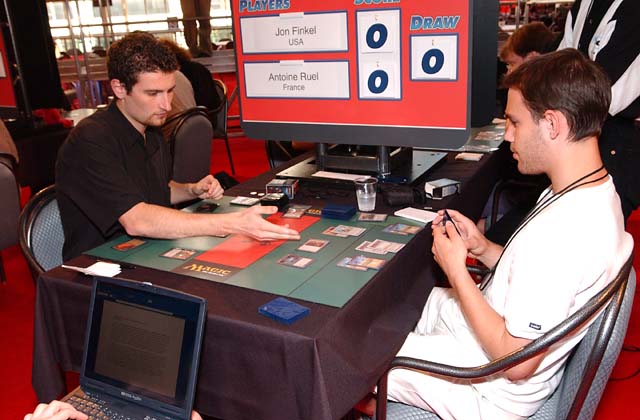 With both players hot on the chase for the Top 8 at the start of the day, it was reigning champion Jon Finkel versus the French wonder Antoine Ruel, to see which one would remain on the easy path to the Round of Eight. Antoine won the coin flip and chose to play first, and played a plains and a first-turn Mother of Runes. Jon started off with an island, and Antoine played a Tundra and cast Seal of Cleansing. Jon used Force of Will to counter the Seal, removing from the game his... Veiled Serpent? Yes, that is a Veiled Serpent, and it's a lot better than the rest of the field thinks it is, or so says Jon Finkel. Jon is playing a mono-blue anti-beatdown deck designed by William Jensen, and on his next turn Jon played a Powder Keg, and after taking a bit of beatdown from Antoine's Mother of Runes, Jon put a counter on his Powder Keg, then played a Ancient Tomb and cast Masticore. Antoine used Tithe after drawing it, and cast Swords to Plowshares on the Masticore, but Jon takes his point from the Mother, and played a City of Traitors and Masticore number two. Antoine had another Seal of Cleansing on his next turn, and Jon lets it in, thanks to his untapped Ancient Tombs.

Jon asked a quick rules question during the shuffle period, most likely the same question Antoine called judges over to ask midway through the first game. Antoine would get to play first again for the second game, and was doubtlessly hoping it went better for him this time than it did the previous time around. Antoine kept his initial seven while Jon Mulliganed, and Antoine started off with a Flood Plain. Jon played an island, then Antoine used the Mirage land to fetch a Tundra, drew for the turn, and played a Scrubland and the infamous Meddling Mage... naming Powder Keg. Jon had another island, and Antoine another Tundra before attacking Jon for two. Antoine then played Seal of Cleansing, which Jon Counterspelled. Jon had a third island plus the Veiled Serpent technology, which would become a 4/4 creature unless Antoine was able to kill Jon with the Meddling Mage alone... but he didn't try, playing his third Tundra, then a Crusade and Soltari Priest after his attack. Jon played a fourth island and considered his options, then attacked with the Serpent and played Jon's signature card, Ophidian. Antoine started his turn off with a Brainstorm, putting back the two worse options, then played a Mother of Runes. Meddling Mage and Soltari Priest attacked for six damage, and Antoine had a Cursed Scroll to play as well.

Jon untapped and attacked with his creatures, and the Mother of Runes blocked Ophidian, while Antoine took four damage... and Jon Boomeranged the Crusade, killing the Mother of Runes. Jon then played an island and a second Ophidian, and Antoine had a Tithe for two Plains at the end of Jon's turn. Antoine then re-played the Crusade, attacking Jon to four life, then played a second copy of Cursed Scroll. Jon untapped his lands and weighed his options heavily, then attacked with the Serpent and Ophidians, drawing two cards. It's four life to eight while Jon has to figure out how best to prevent Antoine from killing him, then Jon played an island and Boomeranged the Priest, then dropped Masticore. Antoine played a plains and recast the Priest, then attacked with Meddling Mage, whom Masticore blocked happily. Antoine's Cursed Scroll kills the Masticore, and it is a third Scroll that Antoine had in hand, so he played it and thought the lock was down on Jon Finkel.

Jon attacked with the army again, drawing two more cards, and used Rushing River with kicker to return the Crusade and Soltari Priest to Antoine's hand. With a one-in-four chance of winning the game Antoine tried the Scrolls, and the first one hit Jon to two, with the second one showing that it's better to be lucky than good.

Jon got to play first for the third game, and considering how close the games have been so far, this can't be too bad for the deck that is perfectly capable of playing a second-turn Ophidian. Jon kept his first hand, as did Antoine, and Jon played an island while Antoine played a plains and Mother of Runes. Jon used Force of Will, removing Counterspell from the game, then played a City of Traitors and turn-two Ophidian. Antoine has another Mother of Runes, and a Scrubland with which to play his Cursed Scroll. Ophidian goes in for a card, and Jon played a third-turn Masticore, putting the lock down on Antoine faster than had been seen in a very long time. Antoine had a Seal of Cleansing, however, for that Masticore, and Jon kept the Mother of Runes busy with the Ophidian, then played a second City of Traitors and his Powder Keg. Antoine had a Flood Plain, then a Soltari Priest, and kept Mom back. Jon put a counter on his Powder Keg, then destroyed the Scroll and Mother before sending Ophidian in for another card. Jon played his third island, thus burying his second City of Traitors, and Antoine used the Flood Plains to fetch a basic plains before attacking with the Priest, then played Steadfast Guard and a second Priest. At the end of the turn Jon played a Boomerang on the Guard, then attacked for a card, played an island and Veiled Serpent.

Antoine's shadow creatures attacked again, but Antoine had no choice but to play Meddling Mage and Steadfast Guard to stay in the game, naming Rushing River. Jon played another land, then passed the turn. Antoine attacked with the shadows, dropping Jon to ten life, and played a third Soltari Priest. Jon got a sixth Island while Antoine again used Flood Plain to find a basic plains, and Jon went down to four life from the Priests, and Annuled when Antoine cast his Seal of Cleansing. After another draw, Jon conceded the match, as he had no answer to the shadows at this late point in the game.