Round 14: Jon Stern vs. Masashi Ooiso 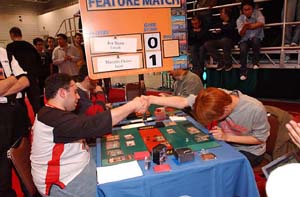 Canadian Jon Stern's most recognizable finish was a second place finish at Canadian Nationals last year, but he's a regular at the Pro Tour, often seen hanging about with the newest wave of Canadian Pros. His opponent, Masashi Ooiso of Japan, is the fan favorite in this matchup. The Rookie of the Year hopeful really needs this win to match pace with his nearest competitor Craig Krempels, to say nothing of the Top 8 berth on the line. These two already played each other this weekend, in the Masters Gateway. There, Stern's Red Deck Wins took down Ooiso's Tinker in three. The stakes are significantly higher now.

Ooiso was on the board quickly with Wirewood Herald and morph. Stern hit his third land and played a morph of his own. Ooiso held back, indicating he had plans for his morph, and played Skirk Outrider. Stern hit with his morph and Ooiso upgraded his Herald into a Timberwatch Elf. Stern dropped Cabal Archon and gave it back.

Ooiso brought the big beats courtesy a Barkhide Mauler, powering up his Outrider to hit for four. Stern was in trouble. He made a Vile Deacon and gave it back. Ooiso's 4/4's charged the field. Stern took eight to the face. Ooiso shelled the board with Timberwatch Elf and Elvish Warrior. 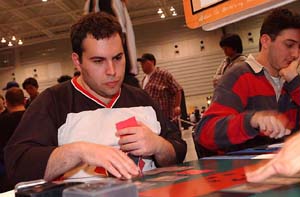 Stern tapped three, then though better of it. He sent his Vile Deacon in for four, and it went unblocked. After combat he Swatted the Timberwatch. His defenses were meager. Ooiso took full advantage, sending his team into battle. Stern doubled up on the Mauler. Ooiso flipped up Patron of the Wild. Stern survived at one life by sacrificing his team. Facing a board of three men, he scooped up his cards.

Ooiso mulliganed for Game 2, and was again first on the board with Wirewood Herald. Stern came back with a predictable morph. Ooiso attacked. Stern let it through. He made a morph of his own. Stern attacked with his morph and after it went unblocked he showed it to be Haunted Cadaver. Ooiso pitched forest, Wirewood Elf and Vitality Charm, holding on to The Jack (Goblin Clearcutter).

Stern had paid the usual price for turning on his Cadaver: loss of tempo. He dropped a Severed Legion and gave it back. Ooiso hit for four with The Jack and Herald, then ended his turn. Stern suited up his Legion with Crown of Suspicion and hit for four. He debated his next play, then settled on face-up Wingbeat Warrior. Ooiso untapped, dropped land number five, and swung all out, reducing Stern to six. Stern returned the favor, bringing Ooiso to eight. He had enough mana to make both Cabal Archon and a morph, with a black left over. 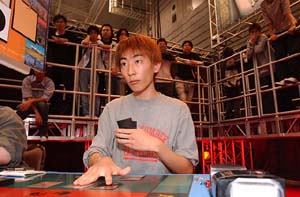 Ooiso hesitated at the end of turn, then untapped. He played a morph, then swung in with morph and The Jack. Cabal Archon blocked the morph. Ooiso spent his last three mana flipping it up. It was Skirk Marauder, and dealt with the enchanted Legion. Stern sacrificed his Archon, but now his victory had been snatched away. Stern needed a rip. He got Crown of Suspicion. He sent the Warrior, bringing Ooiso to four. Ooiso tried to swing. Stern flipped up Whipcorder and pondered. He eventually chose to shut down the morph. Ooiso sent his remaining men, and flipped up Patron of the Wild, taking the match and a place in Top 8.