Round 14: Jordan Berkowitz versus Seth Burn 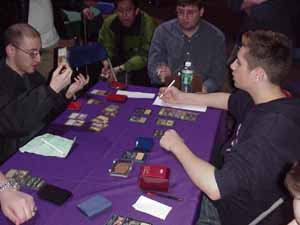 Jordan Berkowitz is a Philadelphia area student who has been making a huge splash on the Magic scene as of late. Having qualified for all five Pro Tours this season, Jordan is looking to earn his first major Top 8. The pro points would go a long way toward getting him on the train, as well.

Seth Burn has gained notoriety as a Brainburst writer who writes about pretty much whatever he feels like for thirty pages, including NFL preseason predictions and MLB picks. He has played in many pro tours back when Jon Finkel was the best player in the world, and he has qualified for even more that he didn’t compete in. His goal for this event is to, in his words, “have fun.”

Jordan’s deck was green/black, featuring an assortment of zombies and beasts, topping off with Havoc Demon. It faces off against Seth’s white/black soldier deck that maindecks Anurid Murkdiver. Normally, this would be a bad thing, but the Murkdiver is absolutely fantastic against green/black, which has absolutely no way to deal with the unblockable four points a turn.

Both players were very serious, contrasting with the relaxed attitude of the match going on beside them. 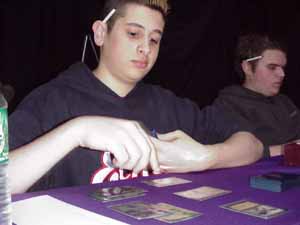 Seth won the die roll and chose to play. Jordan was forced to mulligan to six cards, but found that hand acceptable. Seth led with a turn two Skinthinner, forsaking the option to kill a creature for early damage. This was followed up with a turn three morph.

Jordan tried to stabilize with a Wirewood Savage to block the morph, but the morph was revealed to be Gravel Slinger after damage was on the stack. A Deftblade Elite joined Seth’s squad and the rout was on.

Jordan was unable to draw anything of consequence, only cycling a few cards and getting a few guys out who tried to trade but failed.

Berkowitz was in a position to begin stabilizing, but Seth’s Anurid Murkdiver came out to seal the deal. 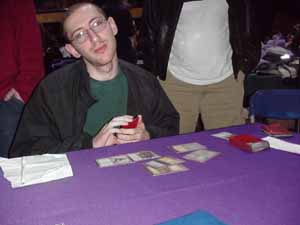 Jordan again chose to play first, and neither chose to take a mulligan. Burn led off with a turn one Deftblade Elite turn two Catapult Squad, and turn three morph. Jordan, however, did nothing until turn four when he cast Death Match. At this point, all rules of normal Magic went out the window and chaos took over.

Jordan summoned a Gluttonous Zombie to Death Match the Catapult Squad, but Seth had his Inspirit to save it. Burn summoned a morph to kill Berkowitz’s zombie and attacked Jordan down to six.

Jordan, having more cards in hand, attempted to play a war of attrition. Eventually, the board was cleared and neither player was willing to play the first creature. Jordan eventually tried to break the stalemate with Havoc Demon. Seth, though, just Death Matched it and finished it with Swat.

Burn followed what up with an Aphetto Dredging for three soldiers and being up so many cards with Death Match in play game him the extra creatures to push through the damage for the win.