Round 14: Jordan Berkowitz vs. Peer Kröger 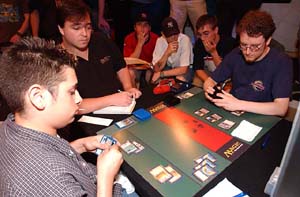 Peer rolled his eyes as he was announced for a feature match. Apparently his record is not so good under the harsh lights (while they are not actually harsh, they are hot). "My record is 0-2 and my overall record is 10-3. I hope to get more lucky this round."

His opponent, Jordan Berkowitz, loves being on stage and hoped for Peer's streak to continue, "I don't!"

"That is not very sporting," exclaimed Peer. He was obviously unfamiliar with Jordan. While Jordan was aware of Peer he was surprised to learn that Peer had been successful in the past. Jordan's career is too new for old-school Peer and his is too old for the young Pennsylvanian. Jordan seemed disappointed to learn that Peer had more Pro Tour Top 8s notched in his deck box then him and seemed further disappointed by the equal number of Top 4 finishes.

Jordan was playing Solitary Confinement. The deck revolves around the powerful enchantment and Squee, Goblin Nabob. The missing draw step is replaced with a Compulsion. If Jordan can Intuition for Squee with that set-up, it is very tough for him to lose.

The deck can be fragile if facing an aggressive deck with Disenchants and that's exactly what he was up against; White Weenie with Meddling Mage and Savannah Lions along with some main deck enchantment removal. Jordan would not only need the combo but a Forbid as well if he was going to win.

Peer opened with a Benevolent Bodyguard on the draw and Jordan came back with a Medallion. One advantage Jordan had in the match-up was that on the early turns his deck appeared to be a Mind's Desire deck. Peer played Meddling Mages on the next couple of turns and named Snap and Mind's Desire. A True Believer was countered in between. 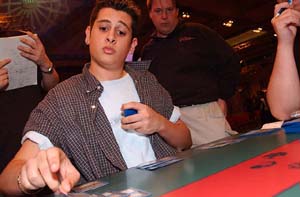 Another Medallion allowed Jordan to Cunning Wish for Intuition even though he missed his fourth land drop. He Intuitioned for Accumulated Knowledge and found another land and played athird Medallion. Peer played a Parallax Wave and Jordan was in a hurry to take his turn but the older player urged him to be patient, "Hold on, I need to put counters on this first." Jordan's eyes bulged; he was drawing nothing and was eager to improve his situation.

A Divine Sacrament on the next turn dropped him to two and he was forced to run the Solitary Confinement with only a Squee in hand and no way to get out of the lock. He had to hope that Peer had no main deck enchantment removal. Three turns later, Peer flipped over a Seal of Cleansing and a frustrated Jordan went for his sideboard.

Peer was obviously unfamiliar with his adversary's deck and Jordan tried to maintain the Mind's Desire bluff, "Those Mages were a kick in the nuts last game." He did an admirable job of repressing his natural sixteen year old sarcasm but he could not stop an involuntary roll of the eyes.

Peer was not paying attention though, he was looking at their name placards and commented that they had both qualified at their respective Nationals—both players finished fourth and were their Nations alternates. Jordan couldn't repress his bravado and added, "...and rating AND Pro Points."

Peer did a better job then his young foe at remaining deadpan, "Woo... Then I am facing a good player. It is quite an honor for an old timer like me."

Peer didn't try and sell him, "Maybe just a little." 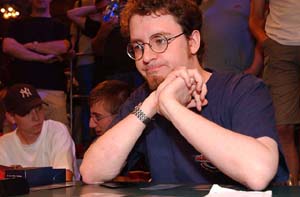 Jordan opened with an Island and when Peer played a Savannah Lions he nailed it with a Force Spike. R&D Developer Henry Stern was watching the match and he laughed, "I just had a 1995 flash back there."

Meddling Mage was also spiked and Jordan gave his opponent a ridiculing stare when he exclaimed, "Not again?" Peer used the Brainstorm/Flooded Strand trick to bury some cards and found a True Believer. Jordan Intuitioned for three Squee and played a Compulsion on his next turn.

Peer got in for some damage with his cleric and played a Seal of Cleansing and a Bodyguard. During Peer's end of turn, Jordan compulsed a Squee. He asked if Peer was still done. When he got no response he asked again. Peer was intent, "Thinking, thinking..." He decided to dispatch the enchantment before it got out of hand—he was holding another one.

Jordan had no action and Peer kept sending his little beaters into the red zone. Jordan Cunning Wished for Intuition and Intuitioned for Accumulated Knowledges but he was falling fast. A pair of AKs found no key parts in SEVEN cards and Jordan conceded in frustration.

There was a loud eruption of applause for the hometown hero who had to admit to Jordan, "I still have no idea what your deck is supposed to do."