Round 14: Jun'ichirou Bando vs. Shunsuke Kamei 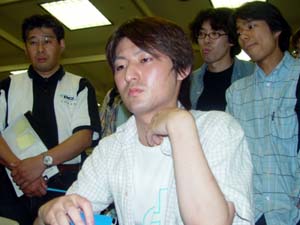 would a big Japanese tournament be without a white-blue mirror match? This deck archetype remains perennially favored throughout Japanese Magic history, and even in environments with Caller of the Claw and Skullclamp, Japanese players find themselves drawn to the control. The winner of this match has a good shot at making top 8. The keys to winning this mirror match are breaking Eternal Dragon parity, truly vicious Mindslaver abuse, and big nasty Decrees of Justice. Both Shunsuke Kamei and Jun'ichiro Bando are relative newcomers to the high level tournament scene, but Kamei's Tokyo colleagues voted him the second most likely player in the Kanto region to win the National Championship. And at 9-3-1, he needs to win to make it into the top 8.

Aside from dropping land, not much happened at the beginning of Game 1. Thirsts for Knowledge happened on both sides, and every turn a land came into play. Both players managed to start Eternal Dragon plainscycling recursion. This regular rhythm was broken when Bando played a Dragon onto the table with five mana open. Kamei attempted a Duplicant, but his Rewind couldn't stop an Annul backed up by Mana Leak from countering the Duplicant. Both players went back and forth with Dragon recursion until Kamei used a Decree of Justice to churn out 7 Soldier tokens. He attacked and forced Bando to Wrath on his turn, leaving the hapless player open to a Mindslaver. Bundo untapped and played a Damping Matrix, forcing Kamei to sacrifice the Mindslaver right then and there.

Looking over at his opponent's hand, Kamei found an Akroma's Vengeance and cleared away the Damping Matrix, leaving Bundo open to further turn theft. The two traded Dragons back and forth for several turns, and Kamei's cycled Decree of Justice for 11 soldier tokens brought him the win. 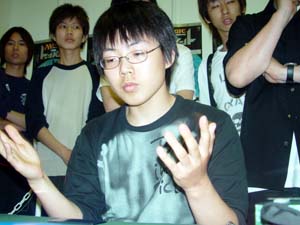 Game 2 played out in a similar fashion. Kamei sideboarded in Decrees of Silence. Bundo sideboarded in some Mindslavers and Decrees of Justice of his own. Both players resumed their furious non-stop land dropping. Bando was the first to put an Eternal Dragon on the board, and Kamei promptly let loose Wrath of God to clear it away. After a vicious counter-war over an Eternal Dragon, Kamei managed to use a Duplicant to gain Eternal Dragon advantage. This time Bando was the first to play a Mindslaver, and yet again it resolved and was activated. Kamei had a hand with an Akroma's Vengeance and two Decrees of Justice. Bundo played the two Decrees as a sorcery with X as zero, and cycled the Vengeance into a Mana Leak. Bundo untapped and waited for Kamei to play another Eternal Dragon, for Bundo had drawn yet another sideboard bomb, Bribery. He used a Rewind to force the Bribery through, and slipped a few large bills under the table to Kamei's Duplicant to get rid of the Eternal Dragon permanently. But after dueling Eternal Dragons went back and forth, Kamei found another Decree of Justice to send an army of Soldier tokens through for the win.