Round 14: Keeping it Fair 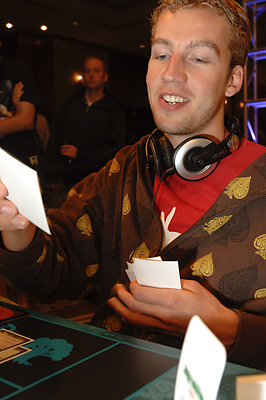 Ruud Warmenhoven takes it easy...This round saw a showdown between two masters of slack: Gab Nassif, sporting a lightly unshaven look, and Ruud Warmenhoven in a hoodie decorated with a poker motif, the sort that’s so popular with the young people today. Both have spent this tournament battling with unorthodox, creature-heavy decks: Nassif with a red-black deck with zero spells and a ton of token creatures, and Warmenhoven with a mono-green Elf deck that’s quite unlike the explosive Japanese design. Both players needed to win out to have a hope at a Sunday appearance.

Warmenhoven led with Llanowar Elves and quickly slid them into his yard as Nassif answered with Mogg Fanatic. He followed up with Treetop Village, then Mutavault and Imperious Perfect. Nassif, meanwhile, got some tokens from a Mogg War Marshal and tapped three for a Mudbutton Torchrunner.

“What? What am I going to lose to here?” wonder Ruud Warmenhoven.

Warmenhoven didn’t have a fourth land, but his Wolf-Skull Shaman gave him a second recurring source of creatures. Nassif suspended Greater Gargadon and threw his Mudbutton at the Perfect when it made a token at end of turn. A Jagged-Scar Archers on top of Warmenhoven’s deck gave him a free Wolf, and after his 1/1 warrior traded with one of Nassif’s Goblin tokens, he dropped the Archers.

“Wish I knew what was in your deck...” said Warmenhoven.

One of them was Magus of the Moon, shutting off Warmenhoven’s man-lands and tightening his mana situation. Still, Nassif needed to answer the growing army on the table. Another free Wolf, this time from Elvish Champion, and an attack for 4. Warmenhoven followed up with Bramblewood Paragon.

Nassif, also stuck on three lands, could muster nothing better than a second Magus. Naturally, Warmenhoven scored another free Wolf on his upkeep, from another Elvish Champion.

Warmenhoven’s creatures charged, and when Nassif moved one Magus to trade with the Paragon, a Gilt-Leaf Ambush served up some more 2/2’s while the getting was good. The clash showed a Llanowar Elf (and a free Wolf) waiting for Warmenhoven, and a tardy Swamp for Nassif.

“It’s pretty nice to not die.”

“It’s all about appreciating the little things.”

The whole crowd hit again, and Nassif agonized over his blocks, trying to find a play with a miniscule hope. There was none, and a turn later he was dead.

Nassif mulliganed to six and kept. Warmenhoven did the same.

“Keeping it fair, what a good man,” said Nassif.

“My hand was awesome, I just felt bad.”

“Is that good?” asked Nassif

Warmenhoven played out a doomed Llanowar Elves, then replaced it with a hardier Wren’s Run Vanquisher. Nassif answered with Mudbutton Torchrunner, prompting more headshaking from Warmenhoven. 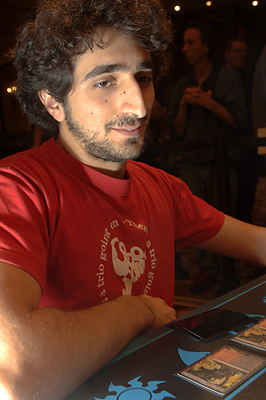 And Gabriel Nassif, as always, is breezy.They traded the monsters. Warmenhoven made some Kitchen Finks. Nassif brought out Marsh Flitter, trading the tokens for the Finks’ first incarnation. All Warmenhoven could muster was a Riftsweeper. Nassif got another batch of Goblin Rogues with a second Flitter. Warmenhoven’s Jagged-Scar Archers were still decidedly wee.

Nassif untapped and rounded out the 1/1 brutality with Pendelhaven and Siege-Gang Commander. Warmenhoven made a second Archers and killed one of the Flitters, but it was a hollow victory with the Commander unanswered. Nassif started to bring the carnage, attacking and sacrificing, wiping out first Warmenhoven’s creatures, then his man-lands, and finally him.

After two games of big armies, the third was something of a letdown. Warmenhoven mulliganed and kept a one-lander with Llanowar Elves. Nassif had Mogg Fanatic, and no lands were waiting at the top of Warmenhoven’s deck.

Nassif’s draw was a nice one: first Knucklebone Witch, then Mudbutton Torchrunner, then Marsh Flitter. Warmenhoven gamely blocked the assault with his face.