Round 14: Ken Ho vs. Geoffrey Siron 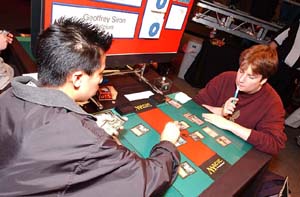 Belgium's Geoffrey Siron is on the verge of vindicating his country's performance at Grand Prix - Antwerp. Standing in his way is the last, best hope of the downtrodden Magic Colony: Ken Ho. Ho isn't running the colony deck, instead opting for an aggro blue-green deck, whose hood ornament is Tarnished Citadel. Siron is running a mono-black deck that is more creature-heavy than most.

Ho started things off with the format's second best mana-accelerators: Aquamoeba. Siron tried an Edict, and Ho countered with Basking Rootwalla. Next Siron tried Braids, but a surprise Arrogant Wurm from Ho made that seemed like a bad idea.

Aquamoeba took one for the team and let Ho hit four mana. A second Wurm came down, and Circular Logic was waiting in the wings. In two short turns, it was over.

Again Ho had his favorite accelerant on turn two. And again, he had the Rootwalla to protect it from Siron's removal. Siron played Mesmeric Fiend and stole one of Ho's two Circular Logics, leaving behind Werebear and Arrogant Wurm.

The Wurm came out to play the following turn. Siron was ready with a Slithery Stalker. Ho tried Werebear. Edict took care of it. Ho made a Tarnished Citadel and Siron had to read it. He made a Wurm token and watched it be Butchered.

Then, a Mongrel. Ho refused to spend his Circular Logic on Shambling Swarm, and started suffering for it. His Logic had to stop the return of Chainer's Edict. With an empty hand and facing the Swarm, Ho willed Roar of the Wurm to the top of his deck.

However, Siron was ready for these shenanigans. Innocent Blooding away his Swarm he dispatched the Aquamoeba and forced Ho to empty his hand to save the Mongrel. Then he showed him Butcher number two.

But it's always darkest before the dawn. Waiting for Ken Ho was none other than his sideboard technology, Nantuko Blightcutter. The next turn, he drew Arrogant Wurm, and surprised the Shambling Swarm, killing his Mongrel but putting him to threshold. He swung for seven, and seven more, winning the match.