Perhaps more than any other, the Japanese Magic Community has embraced the cultivation of new talent. With three rounds to go here at Pro Tour Nagoya, two of the newest kids on the block are within striking distance of a Top 8. Shou Yoshimori came this weekend armed with Tempered Steel, while Toshiyuki Kadooka chose to defy the dominant Big Red strategy, brewing up an aggro package that includes Kuldotha Rebirth, Goblin Wardriver, and Artillerize.

Yoshimori won the die roll and led out with Vault Skirge. He hit for 1 and added Origin Spellbomb and Mox Opal to his side of the board. Kadooka put up a Perilous Myr. Yoshimori got a Myr token out of his Spellbomb at end of turn, drawing a card, then exiled the Perilous Myr with Dispatch. After getting in for 2 damage, he played Signal Pest. 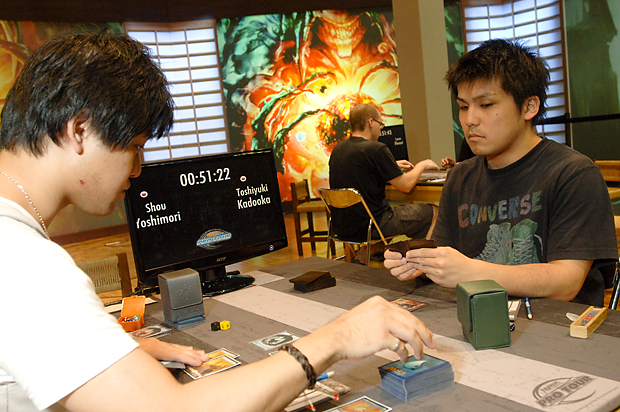 Countrymen Shou Yoshimori and Toshiyuki Kadooka stand in one another's way on the climb to the Top 8.

Kadooka had another Perilous Myr, trying to stop Yoshimori's offense. Another Dispatch cleared the way, and 4 damage dropped Kadooka down to 13. Yoshimori played Memnite and passed, threatening 7 on his next attack. Kadooka played out Panic Spellbomb and Goblin Wardriver. This time his defender stuck around long enough to trade with the Memnite.

Yoshimori made no play and passed the turn. Kadooka passed it back to him with four Mountains open. When Yoshimori moved to declare attackers, Kadooka took care of the Signal Pest with Artillerize, sacrificing his Spellbomb but unable to get the extra card. Yoshimori had nothing to add to the table.

Kadooka tapped his four for Koth of the Hammer and swung in with a 4/4 Mountain. Yoshimori took the opportunity to cash in his third Dispatch, hoping to keep Kadooka off his high-end spells. He hit Koth for 2 and passed. A Panic Spellbomb off the top let Kadooka play Kuldotha Rebirth. Another Mountain hit for 4. Yoshimori was still at 22 thanks to the Vault Skirge.

Finally Yoshimori found some action: A Chimeric Mass for six. Unfortunately, now that Kadooka had some Goblins he could protect his Koth. Kuldotha Phoenix showed up to guard the skies as Koth's loyalty ticked up. Yoshimori's Chimeric Mass stomped on Goblins but couldn't get through. Ichor Wellspring and a second Kuldotha Rebirth meant it wouldn't get through any time soon. Galvanic Blast took care of the Vault Skirge. 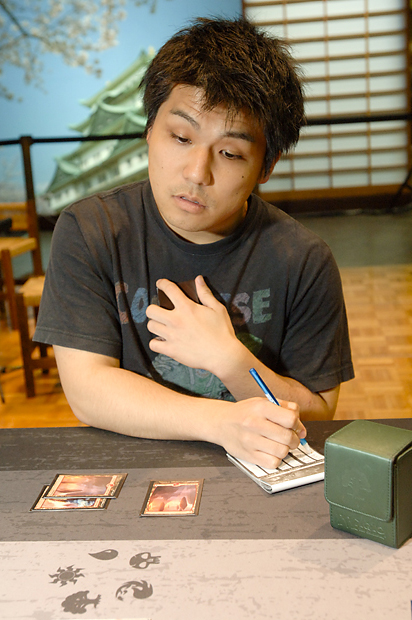 Kadooka untapped with Koth at five loyalty, and that was the beginning of the end. Kadooka ultimated Koth, then played a second copy from his hand. Yoshimori tried to turn it around, but his pressure was too late. Armed with his machine-gun mountains it was a short ride to victory for Kadooka.

Kadooka mulliganed, and after playing an Ichor Wellspring, he untapped facing a board of Origin Spellbomb, Spined Thopter, Mox Opal, and Tempered Steel. He played a second Wellspring and sacrified it to Kuldotha Rebirth, recovering from the mulligan. He took another 4 in the air and watched as Yoshimori added Indomitable Archangel to his squad.

Kadooka played his fourth land and passed. Yoshimori untapped and cashed in his Origin Spellbomb, then attacked with his two fliers. Kadooka Artillerized his Ichor Wellspring to kill the Indomitable Archangel and fell to just 8 life. Yoshimori spent his last two mana on another Origin Spellbomb and a Vault Skirge, holding a second Tempered Steel.

It looked like Yoshimori was sitting pretty, but Kadooka had news for him: Slagstorm, wiping out his air force. Yoshimori got a Myr token out of his Origin Spellbomb and attacked with Inkmoth Nexus for three poison. Kadooka played his sixth land and summoned Hero of Oxid Ridge, leaving back an Inkmoth Nexus of his own. 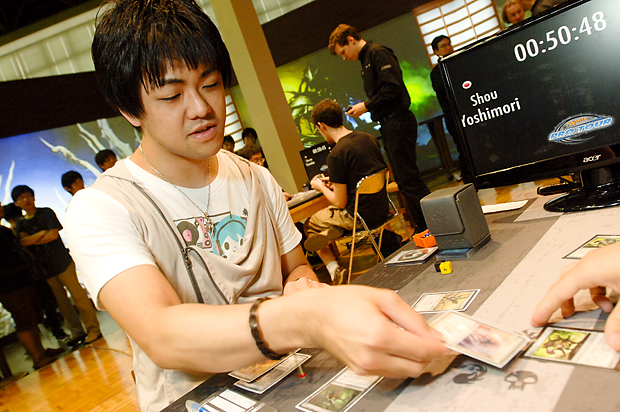 At last Yoshimori brought down the second Tempered Steel and swung in with his Myr token. Kadooka activated his Inkmoth Nexus and double-blocked. Yoshimori paid 4 life for Dismember to keep his token around. He added a Glint Hawk Idol and passed. Kadooka made no play on his turn, but when Yoshimori animated both his Inkmoth Nexus and Glint Hawk Idol and attacked with all three he showed him Into the Core and Dismember.

That left Kadooka at just 4 life, but he was in the driver's seat. He summoned Koth of the Hammer and hit for 4 with a Mountain, and then a Hero of Oxid Ridge sealed the deal.