Round 14: Kyle Rose vs. Kamiel Cornelissen 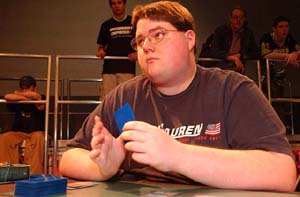 These two teammates of old have to play each other in the final round of the Pro Tour. "A little too sick" was heard a couple of times during the match. For these two, the winner will be top 16 for sure, and has a chance for top 8 though a slim one. The loser will still be around top 24 but that's a big difference.

Kamiel wins the flip but has to double mulligan but starts out with City of Brass, Duress. He takes a Force Spike from Kyle's hand, which still contains Mana Leak, two Accumulated Knowledge, Engineered Plague, Island and Polluted Delta after that. Kyle plays the Island next turn, only to get Duressed by Kamiel again, who misses his land drop this turn. The Duress takes the Mana Leak and Kyle plays the Polluted Delta on his turn, getting ready for some card drawing action. Kamiel misses another land drop on his third turn and things start looking bad for the Dutchman.

Kyle Knowledges at the end of Kamiel's turn, fetching an Island with the Polluted Delta. He plays Psychatog next turn and Kamiel plays a Hermit Druid on his turn, after playing a Mox Diamond. Kamiel knows that the Druid's going to die, and he'll be going with it soon because this game is taking too long. Kyle plays the Engineered Plague, finishing off Druids for the rest of this game, serves with the 'tog and passes the turn. Kamiel ends up Vampiric Tutoring for Cabal Therapy to get a peek at Kyle's hand before the Psychatog comes over for lethal damage.

Kamiel opens with Llanowar Wastes and Entombs his Avatar of Woe. Kyle plays an Island and Kamiel Reanimates the Avatar, going down to 10 on his second turn. Kyle sighs, plays an Island and has to pass his turn. Kamiel attacks and Cabal Therapies Kyle, naming Diabolic Edict. Kyle shows a Psychatog, Smother, Accumulated Knowledge, two Underground Rivers, an Island and a Swamp.

Kyle Knowledges at the end of Kamiel's turn, plays a Swamp and the Psychatog. Kamiel destroys it on his turn, bringing out a Hermit Druid, only to be Smothered next turn. Kamiel Vampiric Tutors for a Duress and Kyle only has 5 land to show Kamiel. Two attack steps later Kyle scoops up for Game 3. 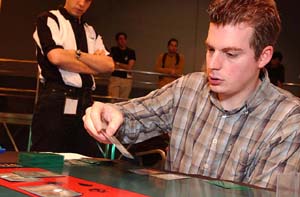 This time Kyle has to mulligan his opening hand and also gets a start of Underground River, Duress. He takes an Exhume leaving a Hermit Druid, Vampiric Tutor and 4 lands in Kamiel's hand. Kamiel plays his Hermit Druid on his second turn, walking straight into the array of two casting cost spells that Kyle has to his disposal to dispatch the Hermit with. Kyle responds with an Accumulated Knowledge, and kills the Hermit with a Diabolic Edict on his own turn. Kamiel also gets his hand Duressed and loses a Vampiric Tutor. Kamiel had another one, and used that during his upkeep to fetch a second Hermit Druid.

Kyle can't remove that one, and Kamiel Duresses Kyle to make sure he's safe to mill his entire deck. Kyle responds with a Fact or Fiction, and gets presented with a pile of two Diabolic Edicts, or Counterspell and two Islands. He takes the former and Kamiel took one of them. After that the thinking starts. Kamiel is going through the math, figuring out what Kyle could possible draw in his next one or two draw steps. He settles for milling his entire deck, Reclamating a Cabal Therapy and an Exhume. He then sacrifices his Hermit Druid to flashback another Cabal Therapy, targets himself to get rid of the Sutured Ghoul in his hand. He boarded one out, making this necessary.

On his turn, Kyle utters "I should know what to do, but I don't" and thought for a long time as well. He asks if Sutured Ghoul had trample or not, asks for the casting cost, and tries to figure out what was right to do here. In the end, he just says go. Kamiel draws the Cabal Therapy, and casts it targeting Kyle naming Diabolic Edict. Kyle has nothing else to save him... yet. He gets one more draw step and it had to be a Diabolic Edict, or one of the Counterspells. He peels the Edict and shows it to Kamiel, causing Kamiel to extend his hand.