Moreno had only attended two Pro Tours before this weekend, finishing in 93rd in both (Pro Tour-Columbus and Pro Tour-Philadelphia), but now he sat on top of the standings with his 11-2 record. He brought a blue-green touch black Madness deck. He had added from the Loam and Psychatog to part it from the old build of blue-green Madness. 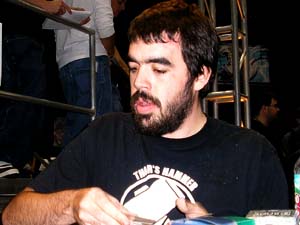 Billy Moreno was guaranteed of finishing higher than 93rd.

Kenji Tsumura played a Mind's Desire deck at Pro Tour-Columbus to finish in 21st. That, plus back to back Top 8's in Atlanta and Philadelphia, have placed Kenji in fourth place for the Player of the Year race. Considering that Olivier Ruel only has a four-point lead, this Pro Tour could give either one a big advantage going into Worlds. Kenji played Psychatog with green for from the Loam.

At 11-2, both players were eager to start the match. Billy won the die roll but had to wait as they were deck checked.

The shuffling process began again as both players' decks came back without incident. Kenji had a problem with the orientation of his cards in their sleeves after the deck came back, but that matter was resolved with out any penalties or real problems.

Billy played a turn-one Careful Study and Madnessed out a Basking Rootwalla. The other card he discarded was a Wonder. A fine start for blue-green Madness, especially considering he had a turn-two Wild Mongrel as well. Another Rootwalla joined the team at the end of Kenji's turn.

That Rootwalla was met with a Darkblast as soon as Billy tried to give it +2/+2. Kenji tried for a Psychatog but Billy had a Circular Logic waiting. A second Tog from Kenji made it into play. Billy dropped down another Rootwalla to keep up the beatdown.

When Billy swung with all three of his creatures, Kenji dropped a Wonder of his own into the graveyard to give his Psychatog flying, killing the Wild Mongrel. Billy had a replacement but two s from Kenji really knocked the Madness deck into a hole.

The second Deed sat on the table for a turn. When Kenji did decide to activate it, he had to counter an Arrogant Wurm as well. Kenji drew from the Loam and started to do the math. Billy was only on 12; did he have enough cards to finish the game right here?

No, Kenji attacked in for 1 and passed the turn. A Careful Study from Billy got him a Psychatog. Kenji cast a Cunning Wish for Circular Logic to stop the Tog and take the first game.

Billy started out strong again with a turn-one Wild Mongrel. The Mongrel hit for three as Billy dropped out a Basking Rootwalla. Kenji had out two lands when he played Duress. Billy, with an empty graveyard, used Madness for Circular Logic … a big mistake from Billy that let the Duress hit for two spells. Kenji saw a Cabal Therapy and a Gifts Ungiven and took the Therapy.

Billy dropped two Chrome Moxes in the graveyard to a Careful Study after Kenji had placed a . Even though Kenji was down to 6 it looked as if he had control. A Gifts Ungiven fetched him a from the Loam and three lands. Billy started to cast a from the Loam of his own to get him colored mana but he didn't have any land in his graveyard, he needed to rely on the to put a few there.

Kenji now had almost complete control of the game; he played a Fact or Fiction and then from the Loam to get through his deck to a Psychatog as quickly as possible.

When Billy finally did turn over land, Kenji began to counter Billy's from the Loam. Kenji was drawing enough cards a turn that he had to discard at least two turns in a row. 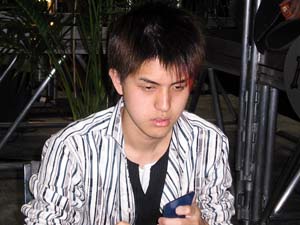 Kenji had enough counterspells to stop Moreno in his tracks.

Kenji continued to counter from the Loam with a Counterspell but the following turn Billy finally got back the few lands that had built up in his graveyard. A Careful Study followed, letting Billy some more.

Kenji's library was looking mighty small when he found a Psychatog. During Kenji's end step Billy resolved a Gifts Ungiven pulling out Wonder, Cephalid Coliseum, Smother and a Tog of his own. Kenji decided to give Billy the Wonder and the Coliseum.

Billy had no defense against that juicy of a grip and passed the turn. When Kenji attacked, Billy just offered his hand and a "good game."