Round 14: Masahiko Morita vs. Shu Komuro 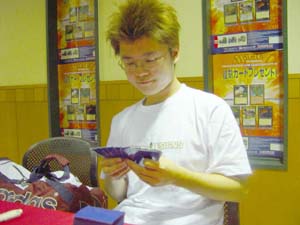 It's make-or-break time for these two competitors. Masahiko Morita, shining star of the Japanese GP circuit, began the day with just one loss. Since then he's gone 3-2 and now needs to win his final match to have a shot at the Top 8. Shu Komuro faced a harder road at 6-2, but rose to the occasion and now shares Morita's station.

Morita took his time in Game 1, leading with Werebear to accelerate to Speculation and Wild Mongrel on turn three. Komuro meantime made a Nimble Mongoose and Studied into a Rootwalla. Morita fetched out Roars and Moment's Peace before handing it back. Komuro Studied again, this time sending Wonder to the graveyard. He hit for two and made a Wild Mongrel.

Morita busted out Catalyst Stone and made a Wurm, but the Komuro's Wonder was complicating. Komuro upped the ante with a threshold-enabling Mental note before swinging for six and dropping Mongoose and Werebear. Morita was going to need that Moment's Peace. He attacked and traded his Wurm for Werebear. He pitched another to his Mongrel and cast two, leaving his Werebear up to cast the Peace.

Komuro couldn't press. He held back. Morita pulled up Mental Note, sending Wonder to his graveyard, and swung. He traded Mongrel and pitches of Wonder and Deep Analysis for Werebear, and Werebear for Mongoose. Now Komuro didn't have enough power to swing for the kill. He made a Rootwalla and held back. Morita smashed again with his Wurms. Komuro chumped and doubled-up, losing his team and leaving Morita with a Wurm. He drew, and scooped. 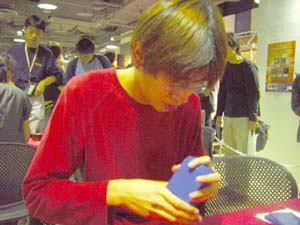 Komuro was forced to mulligan his first hand in Game 2, and then again down to five. They were as good as one could hope for, though. Mental Note, Wild Mongrel and three lands. Morita again sped out with Werebear and then another and a Wild Mongrel. Komuro's pitched Wonder was letting him soar overhead. Mental Note served up Nimble Mongoose, and now Komuro's mulligan was looking spectacular.

Morita cast Wonder and turned it over to Komuro, who was unwilling to bust past for fear of losing Wonder advantage. Morita swung in with Mongrel. Komuro doubled up on it. Both players pitched their hands. The Mongoose and Morita's Mongrel went to the graveyard. Unfortunately for Komuro, one of the cards Morita pitched was Roar of the Wurm. He cast it.

Komuro drew and held back. He took six. Morita tried the trick again, but Komuro had drawn back-to-back Rootwallas, busting them out and murdering the Wurm with Mongrel and Rootwalla, losing his Mongrel. Komuro continued to draw gold, finding a pair of Werebears waiting for him while he brought the beats. Morita drew lands.

But then he found Careful Study, and traded them in for Grizzly Fate. He swung with his Werebear, trading it for Komuro's, then cast the Fate with threshold. Komuro drew Centaur Garden and had to hold back. Morita flashed back the Fate. Komuro drew. It was upheaval. He had just five mana available. He extended the hand.