Round 14: Matt Linde vs. Matias Gabrenja

Deck checks took fourteen minutes, turning both players into little puddles of boredom. When the decks were finally set in front of them though they were off shuffling like a couple of madmen.

Matias started bemoaning his luck even before the match began. "I'm so unlucky, getting paired down and forced to play for Top 8." 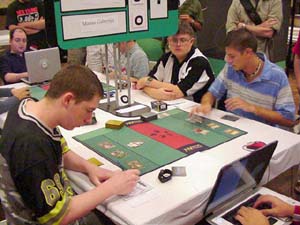 Matt decided to play first and seemed content with his opening hand. Both players started the game off with Swamps, and Matt quickly added a Plains to his side of the table to cycle Renewed Faith.

Rotlung Reanimator hit the table turn three for Matias, but on the other side of the table was Exalted Angel from Matt. Matias tried to even things out a little by playing a Graveborn Muse, but the angel from Matt just kept swinging.

Matias drew three cards the next turn, but at a cost of two life from his Muse. His life total dwindled down to 10, and Matt seemed comfortable with him losing life. The Exalted Angel was gaining Matt a lot of life, and he looked to be in good shape in Game 1.

Matias swung with his army, but it had little effect, bringing Matt back down to 20 life. The attack was followed with a Mutilate, which cleared the board of all the creatures on it. It did leave behind a couple of clerics for Matias to play with though. The clerics were followed by Blackmail, which removed a Wrath of God from Matt's hand.

A second Blackmail removed a second Wrath of God from Matt's hand. 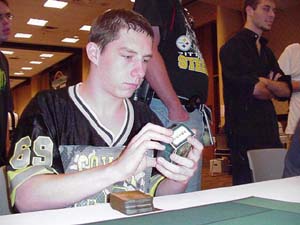 Eternal Dragon landed on the table for Matt as he pointed his finger back at Matias to signal "your turn."

The next Blackmail from Matias catches a Haunting Echoes and a Decree of Justice in Matt's hand. Even after he took a card from Matt, Matias knew this one was over. He scooped up his cards and prepared for round two.

A turn one Cabal Therapy from Linde is right on with Nantuko Shade, taking the Shade away from Matias and leaving him a grip full of other stuff, including two copies of Braids.

A turn two Mesmeric Fiend from Matias takes a copy of Decree of Justice from Matt, leaving him with an Exalted Angel, which he plays face down on his next turn.

Matt played a fourth land at this point, and was finally at the four land he needed to flip over the Exalted Angel.

The Mesmeric Fiend of Matias was joined at the table by a Rotlung Reanimator, and the race was on. It was a race Matt was more then willing to participate in. He flipped up his Exalted Angel and started swinging.

Matias took his four damage and played out a second Rotlung Reanimator. Matt took his turn and cast a very early Haunting Echoes. The Echoes only caught Nantuko Shade, Blackmail and Cabal Therapy. There was some muttering as people wondered why Matt would do that with the board in its current state.

Matias had two Rotlungs, a Mesmeric Fiend and a Withered Wretch in play. If Matt waited until Wrath of God and then played the Echoes he would have been in better shape some people in the area thought. 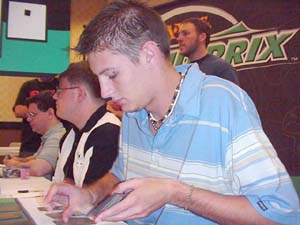 Braids finally joined the table for Matias, still with no sign of Wrath from Matt, which meant he made the right decision with the early Echoes. The Braids had been in Matias' hand for so long that it was gathering mold, sitting there since his opening hand.

The Exalted Angel was still on the table for Matt, but Matias has a growing army of guys as he added Withered Wretch to the table. The Wretch didn't help as Matias was left with no way to remove the Exalted Angel from play and lost the match because of her.

He would deal eight damage with his army, Matt would gain four back from the Angel. This continued until Matias was at four life, with a huge army in play and no cards in hand. He ripped the top card off the pile, finding a swamp, then extended his hand in concession.

The card after that Swamp...Chainer's Edict, a turn too late.