Round 14: Maurizio Vergendo vs. Bram Snepvangers 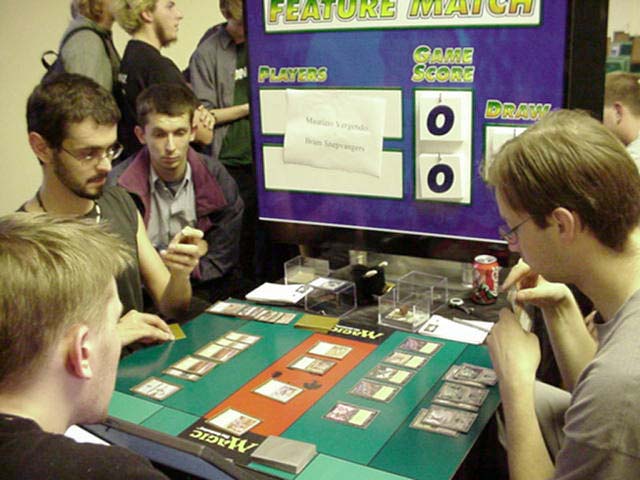 The situation facing these competitors was simple - a win would put them in the top eight, whereas any other result would eliminate them.

Maurizio began with a Devoted Caretaker, but chose not to attack with it to keep his ability active. He followed up with a second turn Patrol Hounds, and a third turn Mystic Visionary. The Hounds attacked past Bram's Crypt Creeper once, and the Dutchman cast Painbringer followed by a Dirty Wererat. The only creature that could attack now was Maurizio's Cephalid Scout. Vergendo didn't find this situation to his liking, and cast Repel on the Wererat. This was trouble for Bram who had no cards in the graveyard to use with his Painbringer. He regenerated the Wererat twice in response, enabling him to use the Painbringer on Devoted Caretaker, thus clearing the way for him to use Afflict on a Mystic Visionary as well.

Next turn Bram replayed the Wererat and tried to use Painbringer on the Cephalid Scout, but the Italian was ready with a Shelter. He also played an Aven Fisher and it looked like Bram was in trouble. He had no cards in graveyard, and tried to get one there by attacking with Crypt Creeper. Maurizio wouldn't bite, and just took two damage, so once again Snepvangers had to randomly regenerate his Wererat just to kill the Cephalid Scout with Painbringer.

Now Maurizio played a Patchwork Gnome and a Hallowed Healer, and attacked again. He used the Healer to stop Bram killing his Patrol Hounds with the Wererat, and regenerated his Gnomes. Aven Fisher put Bram on nine life. After combat the Italian added an Aven Flock to his impressive board. He had Patrol Hounds, Patchwork Gnomes, Aven Fisher, Aven Flock, and Hallowed Healer, and after Bram took his turn he had Dirty Wererat, Gravedigger, and a pair of Crypt Creepers to go with his Painbringer.

Once again Bram had to fruitlessly regenererate the Wererat, just to kill an Aven Fisher with the Painbringer, but he couldn't get close to killing the pumpable Flock. Bram managed do draw a potential answer to the Flock with a Nomad Decoy when he was on just three lives. Maurizio used Aether Burst to return the Painbringer but before it went Bram used it's ability to kill an Escape Artist and an Afflict to kill the Healer. The Italian now dropped his bomb, Aboshan, Cephalid Emperor, and used it's ability to tap down the Decoy, allowing his Aven Flock to attack twice for the win

The first game was played thoughtfully, and at this point there were only twenty-two minutes remaining in the round. 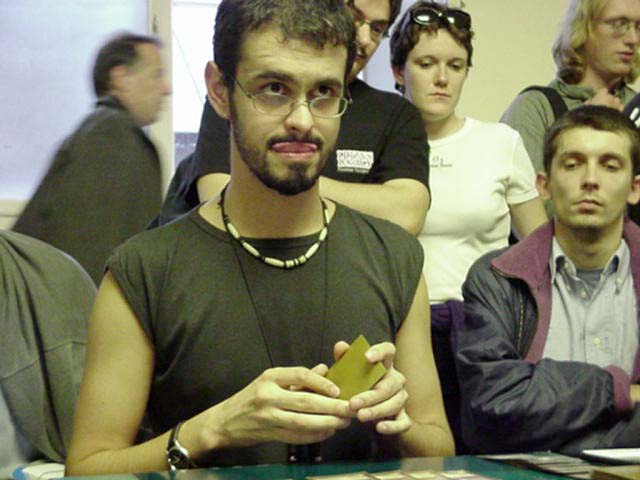 Bram made Maurizio go first once again, and the Italian obliged with a second turn Mystic Visionary and a third turn Cephalid Scout. Bram played a Hallowed Healer and surprisingly blocked the Visionary with it. The reason for this play became clear when the Dutchman played Gravdigger on his next turn. Vergendo continued with an Aven Flock and a Luminous Guardian, while Bram had a Flock of his own this time as well as a Painbringer.

The game looked like it was quite stalled at this point a position that favored Bram gamewise due to his Painbringer, but the Italian match-wise since he was up a duel. At this point the likely result of the game appeared to be that Vergendo would get decked because he had sacrificed so many lands to his Cephalid Scout. Nevertheless Bram began to gain control with his Painbringer, using cards such as Afflict to keep it activated, and started to attack with his Flock.

The Italian continued to draw lands and the game slipped away from him but there was so little time left in the round it appeared impossible they could play a third game. Bram won the second game with only two minutes left in the round.

They agreed not to play a third game, and this meant that neither player could make the Top 8.