Round 14: Michael Dove vs. Valentin Moskovich 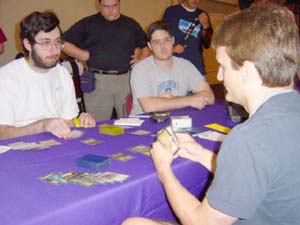 It is do or die time for the two competitors, as the winner of this match will advance to their first Grand Prix top 8. Moskovich is playing the ever-popular mono-black control deck, while Dove brought a white-green creature deck to the table.

Dove opened with Anurid Brushhopper. He phased it out pitching Glory and a land in response to an Edict, and summoned Phantom Centaur. He phased it out yet again in response to Mutilate but could not stop the Edict out of the graveyard, which allowed Moskovich to stabilize. Having removed two Tireless Tribes via Innocent Bloods, Moskovich summoned Nantuko Shade and attacked with it for fourteen. Dove top-decked a Wild Mongrel which, cheered by Glory in the graveyard, could block the Shade indenfinitely, but Moskovich had yet another Edict! Its path clear, Shade delivered the killing blow.

Dove played a turn 2 Wild Mongrel and was able to pitch a Basking Rootwalla in response to Innocent Blood. Anurid Brushhopper followed. Lacking more removal, Moskovich had to contend himself with destroying a Forest with Rancid Earth. Down to thirteen life points, he summoned Nantuko Shade and blocked a Wild Mongrel with it. It traded in combat with Wild Mongrel, taking out a card from Dove's hand with it. Moskovich cast Mind Sludge to get rid of a Forest and a pair of Phantom Centaurs. On the following turn he cast Edict and then used Haunting Echoes to remove most of Dove's dangerous cards from the game.

Shade came out next turn and Moskovich was able to attack for twelve. Dove drew Glory and Arrogant Wurm neither of which he could cast with four lands. The match was over with more than thirty minutes remaining in the round.