Round 14: Mirror Rematch of a Rematch

Mori and Tomohiro Kaji are tearing up this tournament. At 13-1 and 12-2, respectively, they are perched atop the standings in first and second place. This is the third time these competitors have played in this tournament. In Round 6, Mori took down Kaji in the White/Green Glare of Subdual mirror match, and in Round 9, Mori triumphed again in the draft rounds. In fact, Kaji's only losses in this tournament have come at the hands of Mori. Both players are piloting the Scepter-Chant (or "No-Stick") deck that the Japanese are favoring here on Friday.

[Warning: This feature match report includes lengthy descriptions of a match between two decks with very few win conditions, many counterspells, Sensei's Divining Tops, and Wrath of Gods. Continue at your own risk.] 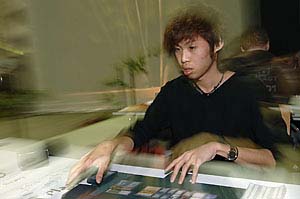 Mori had Kaji's number at Worlds.

The game began, as all control mirrors do, with the players jockeying for position and attempting to tap the other out so that they could resolve their key spells. Both of them attempted early Sensei's Divining Tops, with Mori's resolving and Kaji's running into an Absorb. Kaji then tried a Fact or Fiction on Mori's end step but Mori took the opportunity to use a Mana Leak.

Each player resolved a Thirst for Knowledge and then Mori cast Fact or Fiction, revealing two Scepters and three lands. Eventually Kaji split the Scepters and Mori took the pile with two lands. Mori untapped and, sensing weakness, resolved a Scepter and imprinted Counterspell.

On Kaji's next end step, Mori tried for a Fact or Fiction with two mana and the Scepter untapped. Kaji thought for a good while and then responded with Cunning Wish. Mori activated his Scepter to counter and Kaji protected with Force Spike. He fetched up Disenchant and took down the Scepter.

Kaji untapped and baited out a Counterspell with Scepter, then Wrathed away the tokens. Mori's next threat was a morph, which resolved, and Kaji attempted another Scepter. Mori just stacked the imprint and responded with Ice; Kaji imprinted a Fire/Ice of his own.

The Angel unmorphed and attacked Kaji to 10, putting him within range of a kicked Urza's Rage (a possible Wish target). However, Mori had other plans. On Kaji's next end step, he cycled Decree of Justice for eight tokens, looking to land the killing blow. Kaji let that resolve and then motioned for Mori to pause, lapsing into thought.

Kaji contemplated sided in his Katakis to go for some early beatdown, but eventually thought better of it and changed his deck like so:

Mori took full advantage of playing first and resolved a turn-two Scepter imprinting Counterspell. Kaji had a land and Scepter but no good imprint targets and had to pass the turn back. 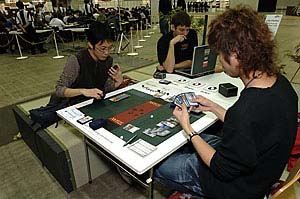 They each headed straight to five lands. On end step, Kaji kicked up Orim's Chant and Mori hit it with Counterspell. Kaji then tried Thirst of Knowledge and Mori let it resolve, perhaps not wanting to tap out. Or perhaps he had no countermagic, because Kaji untapped and resolved a Scepter imprinting Fire/Ice.

They then resolved some card drawing, and when Kaji tried to tap down Mori's Scepter with his own, Mori had a Disenchant in response that he was able to force through. However, he then had to tap out to counter a morph, and Mori returned the favor. The board returned to its original Scepter-free state.

Some additional card drawing led to a powerful Decree of Justice for seven Soldiers from Kaji. He hit once but on his next attack but Mori had his own Decree for six. Twelve Soldiers died in combat and Kaji fell to 12. Meanwhile Kaji had a powerful Fact or Fiction revealing Counterspell, Hinder, Cunning Wish, and two Isochron Scepters. Perhaps remembering last game, Mori gave him a four-card pile of everything but the Wish.

Kaji's next play was obvious: Isochron Scepter imprinting Counterspell. He used it to protect an end-step Fact or Fiction, but Mori managed to counter it anyway with a combination of Hinder, Absorb and Mana Leak. Kaji then had more countermagic to stop Mori's attempts at resolving a morph or a Scepter, but on the next turn Mori finally forced through a Scepter with Fire/Ice. Kaji shrugged and played a second Scepter with Counterspell.

You can't imagine how fun this match was to watch. 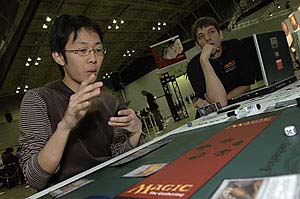 Anyway, there was some more Fact or Fictioning, and Mori cycled Slice and Dice to kill the soldier and stay above 10 life. He clearly had other problems though, as evidenced by the round timer slowly ticking away and his dwindling library.

In response to a Top activation, Kaji attempted a Cunning Wish. Mori responded with Disenchant on the untapped Scepter. Kaji responded with Disenchant on Mori's Scepter. With Kaji now tapped out, Mori slammed down a card, intending to Absorb the Cunning Wish, but accidentally showed an Urza's Rage instead. He fixed the problem quickly and stopped Kaji from accessing his Brain Freeze.

He then untapped and resolved a morph with six cards left in his deck. Kaji simply hardcast an Exalted Angel of his own. Mori unmorphed and used his Top, with time being called as he stared at the cards. He untapped and passed the turn, then cycled Decree of Justice for 10 when Kaji passed it right back. On his own turn he attacked with the team, getting through for six (Kaji falling to 15) and made a Scepter with Fire/Ice.

Kaji untapped and thought for an eternity, continually thumbing through the various graveyards. Eventually he declared his attack and Mori tried to tap his Angel with Ice. He countered with Scepter, but Mori had a Counterspell. Kaji passed the turn and Mori untapped with two cards left in his deck. Kaji had an Ice for the Angel but still took ten from the Soldiers, and Kaji wasted no time in slamming down the Urza's Rage for the second time this game (but this time, for the right reason).

With the draw, both Japanese players managed to stay on top of the standings, with Mori probably just needing one more win to make Top 8, and Kaji needing two.