Round 14: Morgan Douglass vs. Tom Kelleher 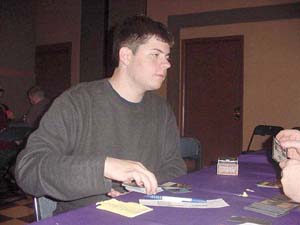 Morgan Douglass is an IRC fixture (mdouglass) and a Maryland native with several Pro Tour appearances. Tom Kelleher is a Philadelphia local lawyer who also has some Pro Tour experience. Neither player has made a top 8 at a premiere event, but the winner of this match will almost certainly reach their first top 8. The loser will have to settle for a top 16 finish and hope that the qualification slots fall down far enough.

Morgan's deck is one of the more popular in the room: red/green beasts. It is a fast deck, featuring fast red goblins and large green men backed by spot removal. Tom's deck is a black/white monstrosity based around clerics.

Morgan won the die roll and chose to play. His turn two play is the best: Sparksmith. Tom could only muster a Shepherd of Rot. The Sparksmith shot down the Shepherd and Morgan brought out a Morphed creature that was matched by Tom's.

Morgan's turn four saw him summon Skirk Commando and shooting Tom's Morphed creature. This was huge, as it turned out to be a Silent Specter. Morgan pressed the attack, bringing out Charging Slateback and reducing Tom's life to 14.

Tom summoned a great blocker in the form of Crude Rampart, but Morgan's creatures just kept coming. Tom chose to block Morgan's Morphed creature, which was revealed to be a second Skirk Commando. Before damage resolved, Morgan used Sparksmith to deal three damage to the wall, and the Skirk damage finished it off, while the attack brought Tom to 8.

Tom attempted a last gasp defense with Severed Legion, but it just wasn't enough as Morgan attacked for the win.

Tom chose to lead off for Game 2, and he again had a turn two Shepherd of Rot. Morgan's turn two was again very good with a Wirewood Elf. Both players played turn three Morphed creatures and Tom used the Shepherd at end of turn to reduce both players to 19.

Unfortunately for Tom, he didn't have a Plains in play, so he wasn't able to make any effective plays the next turn. Morgan, though, was able to keep on trucking. He attacked with his Morphed creature, and Tom blocked with his. Morgan tapped a bunch of lands and flipped over the big, bad Venomous Brackus.

The Brackus was joined next turn by a Treespring Lorian, while all Tom's deck put out was a second and third Shepherd of Rot.

After Tom chumped once with a Shepherd of Rot and got it back as side effect of a Cruel Revival targeting Morgan's Treespring Lorian. Still at thirteen, Tom had a reasonable shot at turning the game around. 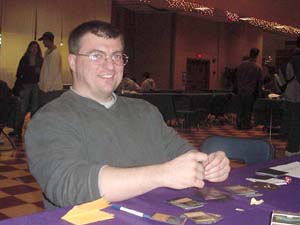 Then Morgan summoned a Blistering Firecat.

The Firecat met Tom's second Cruel revival, again recovering a Shepherd of Rot that had previously chump blocked. Tom was reduced to eight life by the Venomous Brackus, though, and Morgan followed the attack by aiming Erratic Explosion at Tom's head. Much to Morgan's dismay, the first spell hit was Elvish Warrior.

"I wish I would have hit a fattie to put you at like one."

"So do I. Then I wouldn't have had to do this Shepherd math over three turns."

The Erratic Explosion was relevant, as Tom was looking to draw the game out with the three Shepherds of Rot, but the two points of damage put it just out of reach.