Round 14: Nicolai Herzog vs. Derek Bruneau

Round 14 Abraham Snepvangers vs. Bill Stead 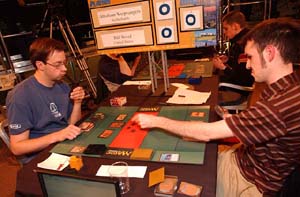 This is it. The final round of the swiss. Top 8 is on the line ... Glory, fame, and a hell of a lot of money and Pro Tour Points.

And then Bill Stead asked me to say hi to his mom.

Both these gentlemen have survived the cooperative drafting of Brian Kibler, Chris Benafel and Ben Rubin – something not to be taken lightly. Unfortunately only one of them was going to make it the playoffs, so battle ensued.

Bram won the die roll and played a Goblin Sledder on his second turn, along with a Goblin Sharpshooter on his third. Bill only had a morph on his third turn but Bram matched that on his. Bram found out what Bill's morph is – a Disruptive Pitmage, when the Dutchman played a Spitting Gourna on his fifth turn. Bill had a Charging Slateback on his own turn, playing it to ensure Bram wouldn't get suspicious for the Slice and Dice he was holding. The Sledder and morph, which turned out to be a Treespring Lorian, hit the Red Zone on his next turn. The Slateback retaliated and Bill cast a Sage Aven to dig for an answer to the situation. To make matters worse, Bram enchanted his Treespring Lorian with a Mythic Proportions to finish it all off quickly. 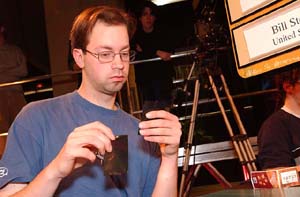 "Wow" – Bill
"Some people would panic in this situation, but ... I think I'm just going to scoop" – Bill
"You have big creatures as well" – Bram
"But they're flying creatures, and I need you to die. I need you to be on zero life this game." – Bill

Again a Goblin Sledder popped up in the early game for Bram. Bill's answer was a Thoughtbound Primoc and Bram only had a morph to play. The Primoc attacked and Bill summoned a morph himself. Bram's morph went unblocked and turned out to be a Skirk Commando – taking out Bill's morphed Charging Slateback. Still the Primoc served and Bram retaliated. A Wirewood Savage was added to the mix on the Dutchman's side and Bill played his Embermage Goblin. The Commando and Savage hit the Red Zone and Bill blocked the Commando with his Primoc. The Goblin Sledder made sure it and the Primoc would trade. Snapping Thragg made an unmorphed appearance on Bram's side while the American just played land. Bram cycled his Solar Blast to kill the Embermage Goblin and serves for 5. 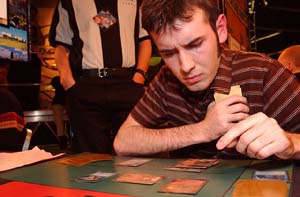 Bill played out a morph and Bram played a cantrip Spitting Gourna and found his Thragg tapped down by Bill's Choking Tethers. Bill's morph hit the Red Zone and he cast his Slice and Dice clearing the board. A new morph was summoned and Bram came back with a morph of his own and a Wirewood Elf. Bill's morph stayed home for defense but a Wave of Indifference made sure it wouldn't really care. Bram's creatures hit the red zone and he unmorphed his Skirk Commando. Bill unmorphed his and it was ... a Disruptive Pitmage.

One draw step later he scoops up his cards and it's Bram Snepvangers to advance to Sunday's playoffs. Kai was seen a little later slumping in his chair about this fact.