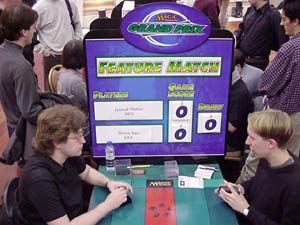 The final round. Initially, this was a report between Alex Shvartsman and Mattias Jorstedt and here is a little excerpt of how it would have read:

Both players, filled with tension, spend the pre-game moments debating who will make the most money and the most Pro Tour points. Alex placing more priority on the points, willing to sacrifice money here to make the Masters series. With both of them fairly confident that a draw will earn both of them both, they do so.

For anyone interested, Mattias and Shvartsman went on to play a friendly match where Mattias won 2-1.

As you, the reader, can see, it would hardly have been riveting. For this reason we now join Nicolas Labarre and Wiegersma Jelger who are midway in playing a tight duel for the top 8.

Jelger started the game with a solid mana curve. A first turn Druid Lyrist was followed quickly by the not too powerful Cartographer. These were in turn followed by a Nantuko Disciple and a Krosan Archer. Labarre's start was almost as fine. An initial Peek at Jelger's hand showed him that he was in for a very quick game. However, he too came out of the blocks rocking, with a Beloved Champion, a Hallowed Healer and an Aven Fisher. The Fisher subsequently chump blocked to draw the card and the Healer and Chaplin were the hasty targets of two Ghastly Demises. This is a brief recollection of events about what happened prior to our arrival. Now, on with the game.

Labarre spent a turn Concentrating and the card advantage seemed to give him a new edge in the game. A Cephalid Scout he had made after the Concentrate was the target of a Gallantry and managed to kill the blocked Cartographer. Scrivener returned a previously used Shelter to Labarre's hand and an Angelic Wall made an appearance.

Meanwhile, Jelger had added a Nimble Mongoose and a Crashing Centaur to his horde of minions. However, to Jelger's downfall Labarre had drawn one of his strongest cards - Cultural Exchange. This successfully allowed him to trade the Wall, Scrivener and Scout for the Archer, Disciple and Centaur; a game reversal if ever there was one.

The Centaur is then blocked by a Vivified Land, the Scout and the Scrivener. When damage resolves everything lies twitching on the floor. The Cultural Exchange has netted Labarre at least a 3-1 advantage already.

Labarre then casts another Hallowed Healer, an Escape Artist and a Mystic Zealot. This is an insane array of beasts as, with about twenty cards in his graveyard, threshold has definitely been reached.

Jelger Moment's Peaces in desperation as the Zealot and Escape Artist beat him down; Labarre able to use the Disciple's ability with the Seafloor Debris he has in play to kill the Angelic wall he so generously donated to Jelger earlier. 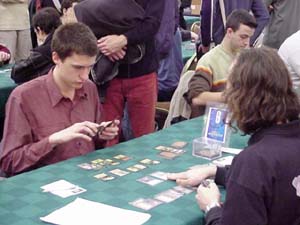 Jelger's not going down without a struggle. He draws and successively casts an Elephant Ambush twice before sending them in backed up by the now 3/3 Mongoose. This seems an act of desperation but could prove deadly with Labarre on seven. An Elephant is Second Thoughted whilst another is Refreshed out of combat to keep it alive. Despite the now thresholded Healer, Labarre falls to a measly one point of life.

Labarre counter attacks with his Zealot and Artist, dropping Jelger to fourteen; before making a second Zealot - back up! Jelger answers with a 4/4 Werebear but Labarre just has too much card advantage and goes on to make a Merfolk Looter. However, there's a catch. He only has five cards left in his library, whilst Jelger has many more so there's no hope of using the Looter's ability to deck Jelger, or to use it at all.

With four cards remaining in his library, Labarre finally deals lethal damage to Jelger to take the first game.

Unsurprisingly, Jelger chooses to play first. Unleashing a Nimble Mongoose on his first turn. However, he only gets a single point of beats in before Labarre makes a Beloved Chaplin and a Hallow Healer.

Jelger appears to have stalled on four Land, with only one Swamp and three Forests, whereas Labarre is continuing his curve with an Aven Fisher and a Mystic Zealot. Jelger Moment's Peaces an attack just to get a card in his graveyard before Ghastly Demising the Chaplin. A Vivified Land blocks the Zealot to draw Jelger a card and to help fill out his graveyard.

Another Demise takes out a Healer that is only replaced by another by Labarre. Jelger makes a Nantuko Disciple and a Crashing Centaur but they seem comparatively weak to Labarre's second Zealot, Angelic Wall and a Persuasion on the Centaur.

Jelger fogs from his graveyard but after humorously offering a draw, eventually succumbs to Labarre's savage assault. The second game was a massacre of epic proportion. Jelger gentlemanly wishes Labarre good luck as he has now made the ever-elusive top 8.