Round 14:
No Return on Investment

While both of these players were out of Top 8 contention at 8-5, this was still our first opportunity to get the reigning Magic World Champion into the feature match area. Yuuya Watanabe hadn't had the best start to his weekend, but he was battling back fiercely, including a 2-0 start to today's five remaining Standard rounds. His opponent, Pat Cox, was in a similar boat, relying on a strong Standard performance to offset his less-than-stellar Booster Draft rounds.

"I did not have good Drafts," Cox told Watanabe. "First I got a bye, then I went 2-3. It was kind of disappointing," he said, laughing along with Watanabe. While neither player had started their weekend off well, they were running strong now, and pressing for a high enough finish to net them an acceptable number of Pro Points. 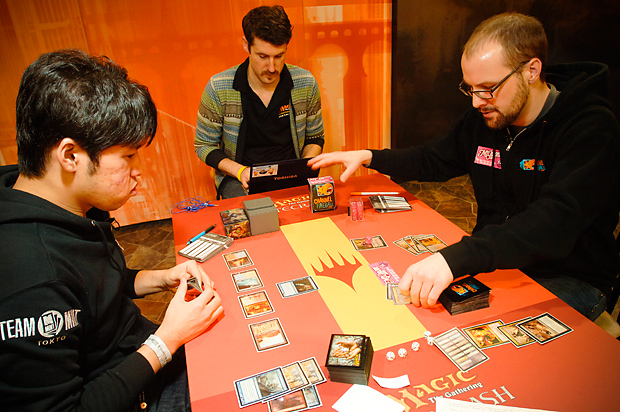 Pat Cox and Yuuya Watanabe have had some rough roads through the Booster Draft rounds, but both players battled on, their Constructed decks serving them well.

Both players began by spreading themselves out across their three colors over the first few turns. With the advantage of playing first, Cox landed a third-turn Liliana of the Veil. Watanabe cast a Think Twice before making his decision, ultimately discarding a land. While Watanabe was discarding extra lands, Cox was discarding potent threats: a Rakdos's Return followed by an Olivia Voldaren. Still, he was able to increase his board advantage, adding a Huntmaster of the Fells to his team. Watanabe dealt with the Huntmaster with a Searing Spear before using a Snapcaster to flash the sorcery back to knock Liliana to three.

Cox began to attack. Rather than trade off his Snapcaster, Watanabe took the 2 and dropped to 18. A second Huntmaster once again filled Cox's board, and Watanabe found himself quickly approaching a turning point. That turning point came in the form of Gideon, Champion of Justice. Immediately activating Gideon's first ability, Gideon shot up to eight loyalty. Gideon was still going to need a couple of turns to prime up his ultimate, and Watanabe needed to find a way to ensure that happened. 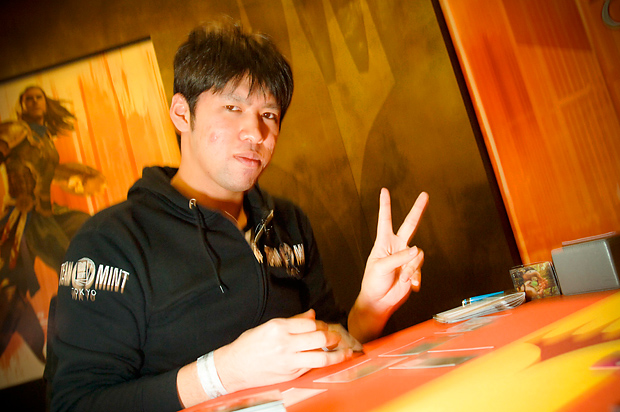 Cox calmly untapped and then decimated Watanabe, dashing any hopes of a comeback. First, a Dead Weight took the Snapcaster out, Watanabe's lone defender. Then, his team attacked Gideon down to two loyalty. Finally, with his last card in hand, Cox aimed a Rakdos's Return at Watanabe, forcing him to discard is hand and redirecting the damage to kill Gideon. Drawing off the top of his deck, Watanabe found a Restoration Angel to potentially provide some defense, but it fell to a Victim of Night, allowing Cox free access to finish him off.

While Watanabe was quick to accept his opening hand, Cox seemed less sure. Eventually settling on keeping it, he was the first on the board, despite playing second. His Deathrite Shaman was a great way to combat the Snapcaster Mages lurking in Watanabe's deck, as well as a great way to speed up his own clock. Watanabe whiffed on an Augur of Bolas on his second turn, sadly losing out on a card. Cox spent his turns trying to accelerate, using a pair of Farseeks to get more lands, though his missing land drops simply kept him on par. A Duress revealed the following hand:

Cox took the Verdict, his only target, and passed the turn to Watanabe. The Japanese all-star wasn't doing much to help his position, though, simply drawing and passing the turn, one after the next. Cox found his fifth land and dropped a Thragtusk into play, giving him his first big beater. Watanabe tried to dig a little with Think Twice, eventually flashing it back. He found a sixth land, another Sacred Foundry, piquing Cox's interest when he played it untapped and simply passed the turn.

Cox attacked. When Watanabe tapped four mana for a Restoration Angel, it became clear that Watanabe had some sort of two mana instant up his sleeve. Watanabe again missed with his flickered Augur before sticking it in front of the Thragtusk. Before damage, Cox killed it with Victim of Night. Watanabe thought before accepting. When Cox tried to play Liliana after combat, Watanabe used a Negate to keep it away. Still the damage was being done. Watanabe was at 11 life and in danger of losing more every turn. On his turn, Watanabe refilled with an Augur of Bolas and a very important Boros Reckoner. Now able to safely defend, Watanabe attacked with his Angel and passed the turn to Cox. 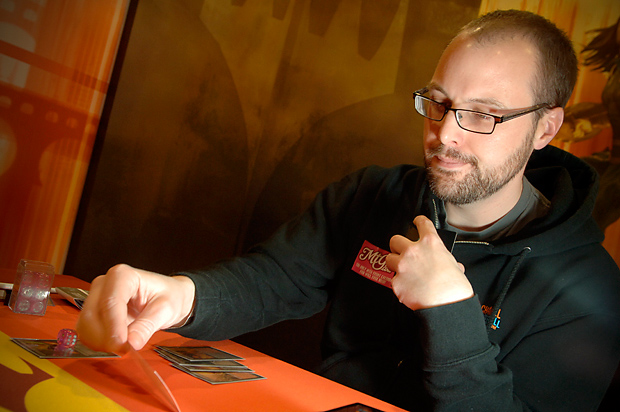 Cox shows off what his Jund deck can do.

Cox chose not to attack into the Reckoner, especially since Watanabe had enough mana to give it first strike. Instead, he chose to aim a Rakdos's Return at Watanabe for three, dropping him to 8. Over the next couple of turns, Cox's first-turn Shaman proved his worth, eating instant after sorcery, and taking Watanabe to 0 one two-point chunk at a time.

Watanabe laughed and pointed to the trio of Augurs of Bolas that had completely missed in the final game.

"I know how that is," Cox empathized. "I played that deck for a while and missed like half of the time."

Watanabe smiled and shrugged, understanding that the cards sometimes fall that way. He wished Cox good luck before heading out of the Feature Match area.