Round 14: Olle Rade vs. David Linder 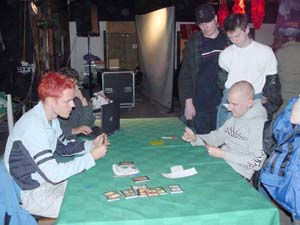 These two Swedish players have to duke it out in the last round for a coveted top 8 spot. Olle Rade has made his comeback after retiring from the Pro Tour a couple of years ago. He hasn't enjoyed the level of success he had back in his glory days but he has steadily been putting up good finishes at Grand Prix's and Pro Tours.
David is a good Swedish player that hasn't made a stir internationally yet. This Grand Prix could be as fine a start as any though.

David played first and came out fast with a Foothill Guide and a Glory Seeker on turn one and two. A lot of players seem to like the WR deck with janky creatures and burn to back it up, but it hasn't been doing especially well at this GP so the reason for this fondness has yet to be uncovered.

Olle, in the meanwhile, wasn't playing much of anything, killing David's Glory Seeker with a Chain of Plasma but David just replaced it with a morph guy.

Olle answered with a morph guy of his own. A manascrewed David Pacified it to continue the beats but when Olle Shocked his morphed Charging Slateback and played yet another facedown creature of his own David's three plains draw started causing him trouble. Another plains enabled a Dive Bomber but he really needed a mountain to get going.

Olle just kept morphing more guys into play and had four facedown guys on the table when he decided to go on the offensive. One of the dorks turned out to be a Thrashing Mudspawn and suddenly David was under a lot of pressure.

A Menacing Ogre entered the fray to make things interesting as the two players tried to find out the best number to call. Both were on 8 with Olle having no blockers.

They started trash talking each other in Swedish, a language this reporter unfortunately does not understand. I can't relate the probably interesting content of this conversation to any of you and I'll just write this completely uninteresting piece of text while being bored to death.

When I woke up 10 minutes later the two players finally decided on a number: 2. They both lost two life and the ensuing attack brought Olle down to 2. 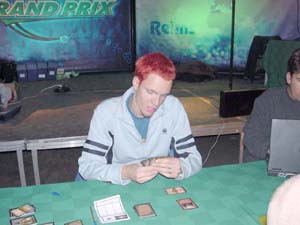 A Wave of Indifference later the game was David's.

David came out of the gates running with a Goblin Taskmaster and a Battlefield Medic but a Wretched Anurid put a stop to any beatdown plan he might have had. A Lavamancer's Skill on the Anurid made matters even worse as David's hand (and deck) was filled with small white and red weenies.

The downside of the large Anurid really came into play this game though with Olle losing 4 life by turn four making it hard for him to go on the offensive immediately.
In the end though, Olle's creatures were simply bigger than David's and his little beaters couldn't stand up to Olle's larger creatures.

David played first hoping to get yet another explosive start playing his trdemark turn one Goblin. He wasn't able to follow it up with a two drop though and his inability to find a third land after cycling twice only compounded on his difficulties. 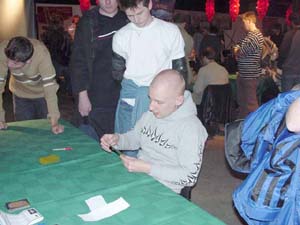 Olle's draw wasn't stellar either as he just played some facedown guys that traded with some of David's dorks. The turning point came when Olle started playing face up creatures... a Severed Legion and a Wretched Anurid gave the manascrewed David a lot of trouble.

A Pacifism and a Shock later the problems were solved though and David started drawing lands to deal with Rade's threats.

After some more trade offs David was able to go on the offensive again, greatly helped by Olle's Pacified Wretched Anurid that just sat there dealing damage to it's controller.
A Pinpoint Avalanche stole the momentum back from Linder and Rade swung in with his Severed Legion and Shepherd of Rot leaving the life totals 13 David, 10 Rade. Olle was still in very real danger of dying to his Anurid though and he had to try and finish things quickly. More random dorks from David made this job hard enough even without the life loss from the Anurid but when David played his ninth creature Rade succumbed to the little beaters.

David advances to the top 8.