Round 14: Osamu Fujita vs. Jin Okamoto 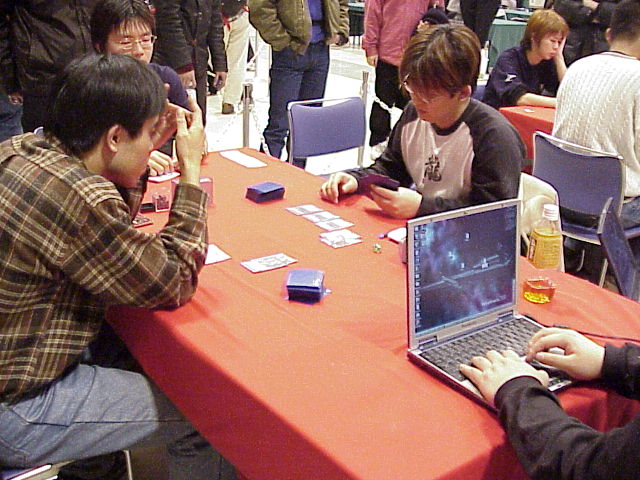 In the last round, these two tired superstars needed just one win to push them into the Top 8. Would it be the Okamoto Djinn himself, reigning APAC Champion, or would it be Osamu Fujita, hungry for a top-level singles finish?

Fujita led with a Treetop Village, and Okamoto came back with Phyrexian Furnace and Sapphire Medallion. Fujita tried a Pernicious Deed, and Okamoto let it go. When a second entered play, threatening to wipe out his investment, he decided to Fact or Fiction.

The piles presented were two Donates versus Volcanic Island, Illusions of Grandeur and Force of Will. Okamoto thought hard before taking the Donates, pitching one to the Force in his hand. Fujita came back with another nail in the Donate coffin, Spike Feeder. Okamoto Intuitioned for Accumulated Knowledges in response. The three cards he drew turned up no action, and so the Feeder resolved.

But Fujita wasn't out of the woods yet. In a flash Okamoto had gotten the fourth Knowledge, and used it to power through Illusions and Donate. Fujita stood at two life, with one counter remaining on his Feeder. He chose to tap out for Weaver. Okamoto made a second Medallion and passed the turn. Having tapped his lone red source, Fujita was free to try Rancors. The first was countered, the second survived. Okamoto fell to twenty-seven. Fujita moved a counter to his Feeder.

Okamoto was happy to wait. He thawed out lands while Fujita tried in vain to draw his fifth land. Merchant Scroll got him a Fact or Fiction at twenty-one life. It netted him a Medallion, Counterspell and Intuition. His Morphling aimed to wear down Fujita's Weaver while he set up the second combo-kill. Merchant Scroll got Capsize. Fujita destroyed the Medallions.

But suddenly, a glimmer of hope. Fujita wore down Okamoto's counters with Duress, Deed and Feeder. Just three cards remained in Okamoto's library. If Fujita could force through a Spike or a Deed, Okamoto would deck himself. Alas, it was not to be. Fujita's Weaver ran out, and he held no more inexpensive bait spells, and had to go for his Living Death. Okamoto countered, and swung for the win.

In the second game, Okamoto mulliganed, and kept a one-land hand. Fujita Duressed, and Okamoto decided to pitch Back to Basics to Force of Will, protecting his Intuition. Combined with the Sapphire Medallion in hand and just one more land, it would let him Intuition for islands and escape his manascrew.

Fujita got the beats going with Yavimaya Elder. Okamoto played Medallion. Fujita had a Uktabi Orangutan to smash it. Okamoto had a replacement. Fujita followed up with Pernicious Deed, looking strong.

At five life, and facing a lethal attack, Okamoto Intuitioned for Knowledges and cast one. Fujita burned one with his Furnace. Okamoto untapped and rocked the board with Earthquake for two. Merchant Scroll got him Fact or Fiction. Fujita played an Elder and still had enough mana to Deed for four. Dust Bowl kept Okamoto at four lands. He had a counter for Spike Feeder, but still died on his next turn.

Game 3 was more Okamoto's speed. Plenty of land and all the bits of the combo. Fujita had an early Spike Feeder, but Okamoto was busy Intuitioning into Knowledges, which provided a Merchant Scroll for Force of Will. That stopped a monkey from mashing his Medallion.

Another scroll got the fourth Knowledge. Fujita risked a Spiritmonger. Okamoto countered, and drew four cards. It hardly seemed fair. Okamoto untapped, played a second Medallion, then Illusions, then realized he didn't have a Donate. Oops.

He tried Fact or Fiction. It turned over two Intuitions, Capsize, island and Force of Will. He got the Intuitions, and went for three Donates. He Donated. Fujita was left at two. He tapped out for Spiritmonger instead of denying Okamoto his red mana. He ate an Earthquake for six for his folly. He sacrificed his Spike Feeders to stay alive at two, but still refused to Bowl away Okamoto's Volcanic Island. Fire finished him.

3 Illusions of Grandeur 2 Fact or Fiction