Round 14: Patrick Sullivan vs. Gary Wise 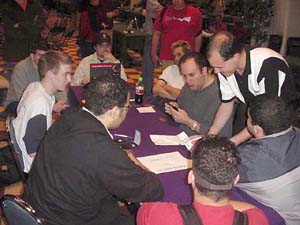 Patrick Sullivan is one of the members of the hot up-and-coming Jersey team, TOGIT (The Only Game In Town). This group has produced both CMU'er Eugene Harvey and PT Top 8'er Osyp Lebedowicz, so Sullivan certainly runs with a good crowd, even if he isn't a big name himself.

Gary Wise should be known to all by this point and needs no further introductions.

The winner of this match will advance to the Top 8, and the loser will have to settle for a substantially smaller prize.

Gary: "We're the only two white players at the table and that's why we're 2-0. There were two Jareths at table—Turian opened one, and Manning took the other, even though he was mono green. We both should have had one."
Patrick: "But I got a Dive Bomber out of that pack so all is well in the world."

Game 1:
Patrick was playing purple sleeves. They matched the color of the tablecloth perfectly, leading Gary to comment about the camouflage tech. Both players kept the initial seven and went to town. Even though Gary played first, Patrick had the first play with a Glory Seeker. Gary matched with a morph creature, but he opted not to block. This time Sullivan had the mystery creature, and they traded on Gary's attack—two Daru Healer.

You know what happened next: Gary played one of his Daru Cavaliers, starting the chain of first striking madness. TOGIT member Sullivan opted to go to the air, summoning the aforementioned Dive Bomber—which seemed mightily small when compared to the 4/5 Tephraderm that Wise summoned next.

While Patrick played Gravel Slinger to stop the Cavalier, he seemed to have no answers when Wise tapped out for Jareth. On his next turn he made the mighty Legend pro white and black, and swung past a newly summoned Screeching Buzzard. This brought Patrick to a very precarious six life, with Gary sitting at fourteen.

The two flyers entered the red zone to reduce Gary to ten, while Gravel Slinger #2 and Glory Seeker #2 came to play defense.

Gary thought long about what play to make next—as Zev Gurwitz came by and started yapping his flap.

I guess Gary brought Zev to Standstill. Ha! Get it? Never mind.

Anyhow, Gary thought about what to do next. If he swung with just the Titan, Patrick might have a trick to get through the next turn for the ten damage that equaled Wise's life total. If he swung with the Tephraderm, Sullivan would be forced to block (since the Titan would reduce him to two life), and would be unable to swing for the win.

Gary, in the end, made the decision to play conservatively and attacked with just Jareth. This allowed Patrick to cast Dirge of Dread and attack for exactly ten, Gary's life total.

Or so it seemed.

Gary cycled a land from his hand, and drew into a Shock! He could have cast the Shock at Patrick to end the game. Instead Gary made a significant mental error and decided to Shock one of the attacking creatures, even though his opponent was at a grand total of two life.

Patrick had Inspirit to keep the Shocked creature alive, and won the game.

Gary and Patrick kept their hands, but Gary was forced to cycle Armor in order to get to some meat in his deck. Meanwhile, Patrick began strong with Disciple of Malice, Nantuko Husk and Dive Bomber, all unanswered. Finally, Gary played a Dive Bomber of his own, but Patrick swung through, trading flyers and playing Battlefield Medic and a morph creature. 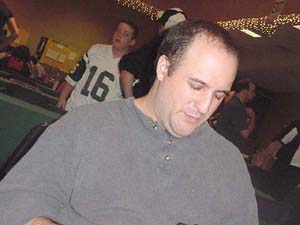 Gary seemed to stabilize with a Tephraderm, capable of stopping Patrick's entire force. Sullivan had four creatures on the board, and could keep momentum by hitting for at least four (possibly more if the Husk was unblocked), as Gary already was at 13. He picked up Tephraderm to read the abilities of the mighty beast, and shuffled his hand nervously, looking for a solution. He played a Plains, shook his head, tapped his fingers thoughtfully on the table, and passed the turn.

This allowed Gary time to play Daru Cavalier, and start up the Cavalier chain. Gary presented his deck for Patrick to cut (after he searched out the Cavalier) and then Patrick drew a card. Gary immediately called a judge—Patrick had thought Gary said go, but Gary still had spells to cast for the turn. Head judge Nat Fairbanks ruled that Patrick had drawn an extra card (both players agreed on the situation), and Patrick was given a game loss.

Game 3 came with the first two being decided on a major play error and a major procedural error. Gary asked all the spectators to please be quite while he shuffled his deck, then started having a conversation with the very same spectators at a very loud volume about the various Rocky movies.

Patrick started the game out with two lands, while Gary began with a Goblin Sledder. Wise went to write down the life totals, but lost his pen.

Gary: "I could have sworn I had a pen here a second ago."
Antonino DeRosa: "It's right here! (Points to Gary's score pad.) I'm sure glad I'm not old."
Gary: "I'm gonna get you later for that."

Meanwhile, the game proceeded with Gary bringing out Gustcloak Courier and Crude Rampart, while Patrick summoned a morph creature, Nantuko Husk, and Daru Healer. The only creature getting through for any damage was Gary's flyer. The Canadian further tied up the ground by bringing out, you guessed it, a Cavalier.

Things got interesting the following turn, as Patrick cast Aurification. The life totals were 20-14 in Gary's favor, but his creatures would only be able to hit Patrick once for the rest of the game before becoming walls. The flyer stuck, backed by a sacrificed Goblin Sledder (20-13 with one being prevented by the Healer.). Deep in thought, Gary had to ask the crowd to silence their incessant chattering while he surveyed the game situation.

Patrick started up and air force with Dive Bomber and Screeching Buzzard. Gary was setting up for a Slice and Dice to clear the board. Patrick Inspirited his Dive Bomber and sacrificed a whole bunch of creatures to the Husk, leaving the board situation as the follows: Gary had Crude Rampart with two cards in hand, and Patrick had Dive Bomber, Nantuko Husk and Aurification with one card in hand.

The Bomber swung, bringing the life totals more in line for the first time this game, with Gary leading 12-11. Daru Lancer entered the board for Sullivan, as Gary Shocked the flyer on the board. Gary then cast another Cavalier to get his third Cavalier of the game. 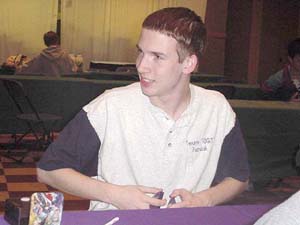 Each player dropped morph creatures. Gary played Cavalier number three, but had not boarded in the fourth. Each player continued building up their forces, with Gary enchanting the Husk with Pacifism, and Patrick bringing out a Glory Seeker and unmorphing his Fallen Cleric.

Gary plopped down Sparksmith, which was quickly Smothered. Patrick hard cast Disciple of Malice, which faced down a board of white creatures plus a morph on Gary's side. The judges sounded the five minute warning, as Gary drew into his Pit Fighter Legend and swung for four—turning his Legend into a Legendary Wall. The swing reduced Patrick to seven. Gary cast Erratic Explosion to kill Fallen Cleric (so he would not die to a Dirged alpha strike). Patrick top decked and played Gluttonous Zombie, which ran past all of Gary's creatures to bring the life totals to 9-7.

As time was called on the match, Gary picked up Aurification to read. He cast Akroma's Blessing, naming White (Patrick's only non-white defender was Disciple of Malice). He swung with both his morphed creatures plus a Cavalier, and chose to block the first of Gary's morph creatures with the Disciple. The other was a Dawning Purist—which promptly destroyed Aurification, and reduced Patrick's life total to three.

Patrick, though, cast Dirge of Dread on his own turn and swung with all his creatures. This was enough damage to kill Gary and win the game.

Sullivan advances to the Top 8.