Round 14: Phil Freneau vs. Zvi Mowshowitz

Amid the myriad of players who were discussing drawing into the Top 8, Phil Freneau and Zvi Mowshowitz were forced to play for position. The winner would enjoy the fruits of a long weekend of Magic and the loser would have to wait until GP New Orleans to make the top eight.

Zvi won the die roll and chose to play. Neither player took a mulligan as the match began. 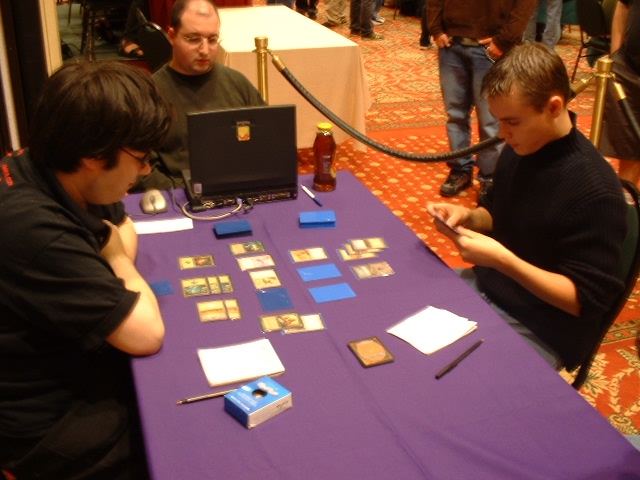 Zvi opened strong with Foothill Guide, a morph creature and Wellwisher. Phil answered with Battlefield Medic and two morph creatures. Mowshowitz came across the red zone with his morph guy (backed by five untapped lands, most of them Forests), and then cast Barkhide Mauler. Freneau would have none of those beatings, as he enchanted the beast with Pacifism, relegating it to the bench.

Each player threw their 2/2’s across the table, with virtually no blocking going on until Zvi cast an Aven Soulgazer with the life totals at 11-10 in his favor. The large flyer also felt Pacified, allowing Freneau to his beats for another two. Zvi gained one life back off his elf, but seemed displeased at the number of local enchantments on the board. All he could do was cast Symbiotic Elf and pass the turn, content to play life gain and defense against Freneau’s remaining morph blocker and Medic.

Philip cast Daru Cavalier, allowing him to search out a second first striker from his deck. Zvi untapped, played land number seven, and said go. Freneau cast Dive Bomber, and Zvi took the opportunity to activate his Soulgazer twice, revealing Fallen Cleric and Gravel Slinger as the two morph creatures across the table.

Zvi drew, and played a Pacifism of his own on the Bomber, emptying his hand and allowing him to swing for three (17-7 in his favor). However, the Bomber plus the Gravel Slinger (which he had seen the previous turn with the Soulgazer) would be able to kill the flyer on the next attack, and Zvi had nothing on the board to prevent this.

Realizing the futility of the attack, Zvi simply summoned and Everglove Courier, bringing his juice up to three life a turn. “You’re playing forty cards, right?”, asked Zvi, which Phil nodded to affirmatively. Pacifism number three shut down the flyer, allowing Freneau to swing in for seven with his Defender, Cavalier, and Fallen Cleric (as Zvi’s blocking situation would be awful this turn given the amount of damage prevention on the other side of the board).

On the following turn, Daru Cavaliers, Daunting Defender and still face-down Fallen Cleric entered the red zone. Zvi morphed a Daru Lancer, and blocked the two attacking first strikers with his own first striker and his Symbiotic Elf. Freneau totally wrecked Zvi this turn, by sacificing Dive Bomber to deal two to the Lancer, and casting Inspirit on the elf-blocked Cavalier, keeping it from being saved by the Courier. On top of this, Zvi placed his Symbiotic Elf in the graveyard before activating Wellwisher, gaining one less life for the turn than he should have.

Freneau went full out on the offense, beating Zvi down slowly but surely. He cast Prowling Pangolin, which Zvi killed by sacrificing his two Pacified creatures. Freneau reduced the Your Move Games team member to a paltry six life, facing down a Daunting Defender, Fallen Cleric, Daru Cavalier, Gravel Slinger and Battlefield Medic versus his sole remaining creature, a Wellwisher. Krosan Groundshaker came out to play defense for Mowshowitz, while Freneau cast Wretched Anurid.

Suddenly, the game became close again. Zvi cast a second Symbiotic Elf, allowing him to gain two life a turn and making Phil lose a life to his zombie. Then, he summoned Glory Seeker against two of Phil’s morph creatures, dropping his opponent’s life total to four, while he rose to a much healthier thirteen. It looked like he would come back and win, until Freneau top decked Dirge of Dread and cast it to attack for eighteen and win the game.

Game one took twenty five minutes. “I hope this next game doesn’t take as long as the first,” mused Zvi. “I hope so too,” replied Phil, “but I think I want a different outcome than you.” Just then, time was called at the PTQ across the room. “What?!?!?”, yelled out Zvi. “I knew we were taking a while to play”, he cackled, “but that is ridiculous!” 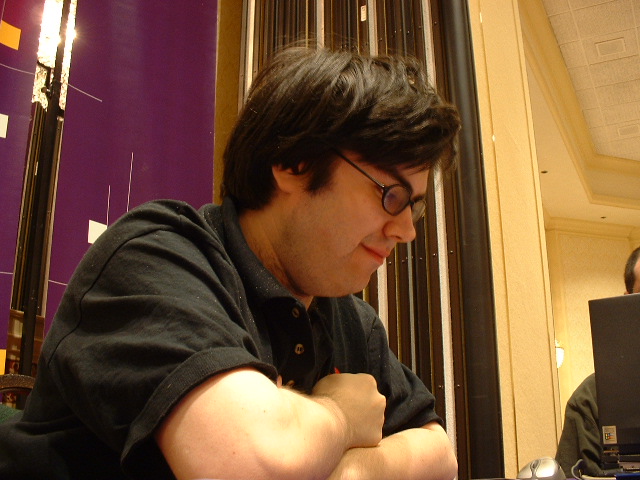 Zvi chose to play first, making the first move with a second turn Wellwisher. Phil cast Wretched Anurid, while Zvi could only play a third land and say go. Morph creature #1 on Phil’s board joined the zombie beast, and a Pacifism on Zvi’s newly recruited Gustcloak Skirmisher allowed him to swing for five.

Zvi cast Barkhide Mauler, bringing his opponent down to seventeen, all this damage having come from Wretched Anurid. The next attack saw the Anurid run into the Mauler, but come out victorious due to Inspirit. Zvi scrambled to stabilize, casting Daunting Defender and Weathered Wayfarer, but the larger of these two got readily Pacified. The next attack dropped Zvi to six, Phil to ten (thanks to two insect tokens generated by a blocking Elf), but Mowshowitz brought a second Wellwisher on board, allowing him to gain four life a turn. He destroyed Pacifism on his flyer with Piety Charm, and swung for two.

As an instant replay, Freneau Pacified the flyer a second time, and came in for three. Zvi gained four, and then cast a second Piety Charm destroying the enchantment on his Daunting Defender, allowing him to attack for exactly Freneau’s life total. 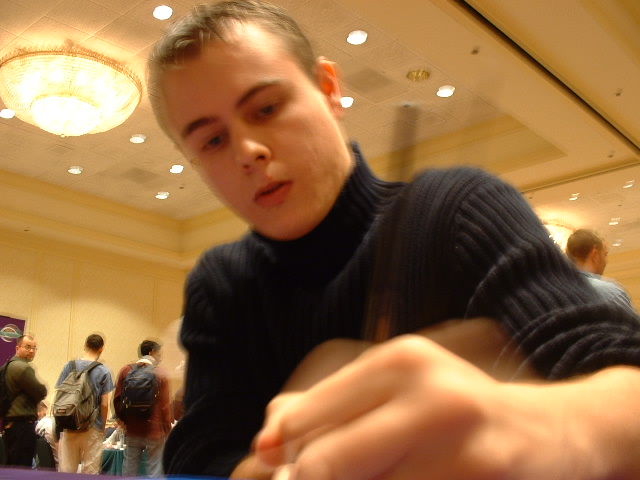 Phil’s game three plan consisted of cycling Secluded Steppe on turn one, Renewed Faith on turn two, and laying nothing but lands on turns three and four. Meanwhile, Zvi played a turn three morph creature followed by Gustcloak Skirmisher. Turn five brought Prowling Pangolin onto the board, with Mowshowitz declining to sacrifice his creatures. He retaliated with Symbiotic Elf, which in turn stood face to face with Daunting Defender.

Zvi swung the game on the next turn with his attack step. Freneau chose to block Zvi’s morph, which quickly was revealed to be Treespring Lorian. This attack brought the life totals to 16-14 in Phil’s favor, but his next turn brought much ruination upon the house of Zvi. Both of his heavy hitters were Pacified, as the Pangolin reduced the life totals to 16-8. While Freneau played three Pacifism, Zvi played at least as many enchantment removal spells, as he Naturalized and Piety Charmed both of the enchant creatures away.

The Pangolin got chumped by Symbiotic Elf, allowing Zvi to swing with his team. Phil instantly untapped his Pangolin with Inspirit, making the beast an 8/9 blocker for the Lorian. Zvi’s flyer still came in, and Krosan Groundshaker joined the Zvi defense foundation.

And then Freneau drew Dirge of Dread and sent all his boys in to kill Zvi. The crowd went wild. Freneau went wild. Zvi hung his head in disbelief and Shock.