Round 14: Planting the Flag

Frank Karsten was "running well" as some would say. Frank would need to keep this streak going if he were to make it into the top 8. He and David Ochoa sat at 11-3 and both players were looking to finish the last few rounds today with wins.

Frank won the die roll and chose to play first. David played a turn-two Lotus Cobra. Frank played his third land and passed the turn. David took his third turn, but his deck didn't produce a third land. In went Lotus Cobra and Frank's life dropped to 18. Frank cracked a fetch land on turn four then cast Day of Judgment. Lotus Cobra bit the dust and David's mana troubles had gotten much worse. 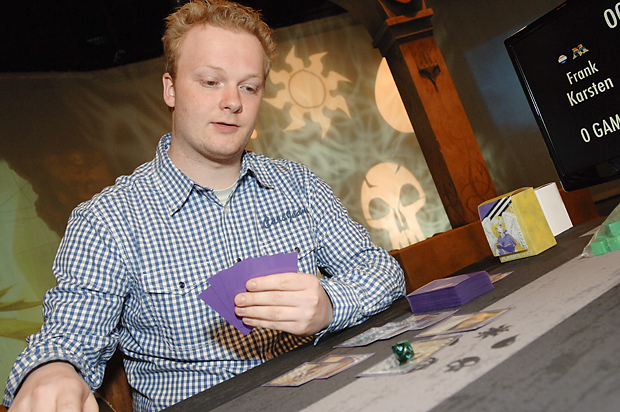 Mr. Karsten, known for his frankness.

Draw-go from David sent the turn back to Frank. Frank played Wall of Omens and sent the turn back to David. David still hadn't found his third land, but attempted to alleviate some of his mana woes with another Lotus Cobra. Cancel from Frank denied David's attempt at mana acceleration and his Gideon Jura follow up prompted the concession.

David broke the land-go routine with Explore on his second turn. Steam Vents entered the battlefield beside Raging Ravine and a Mountain while Frank answered with Everflowing Chalice with one counter. Lotus Cobra hit the battlefield for David, which combined with the fetch land already in play and the fetch land played on his turn was able to generate the two blue mana necessary for Jace, the Mind Sculptor. David used Jace's 0 loyalty ability then passed the turn. Now was Frank's turn to be mana-light. Frank cast See Beyond in hopes of finding his third land. Frank passed the turn with no land drop. Keeping with the "turnabout is fair play" aspect of this match thus far, David cast a kicked Goblin Ruinblaster, destroying a Celestial Colonnade. Frank was now down to 16 life and two mana sources. Frank tried to muster a defense with Wall of Omens and Journey to Nowhere, but Jace's -1 loyalty ability on Wall of Omens and a second Goblin Ruinblaster all but sealed the deal.

Frank kicked things off with See Beyond while David led with Lotus Cobra. Journey to Nowhere sent the Lotus Cobra to the exile zone. David could only follow up with a Raging Ravine. Wall of Omens and Celestial Colonnade hit the battlefield on Frank's side with the latter being destroyed by a kicked Goblin Ruinblaster. Frank played a Seijiri Refuge and passed the turn. Now with enough land to activate the Ravine, David attacked with both the man-land and Goblin Ruinblaster. Wall of Omen stood in the way of the Ravine and the Ruinblaster dropped Frank to 17. Sphinx of Lost Truths halted David's assault, and a second Sphinx allowed Frank to start mounting an offense. David and Frank traded blows with Sphinxes and Ravines. Both players sat at 13. 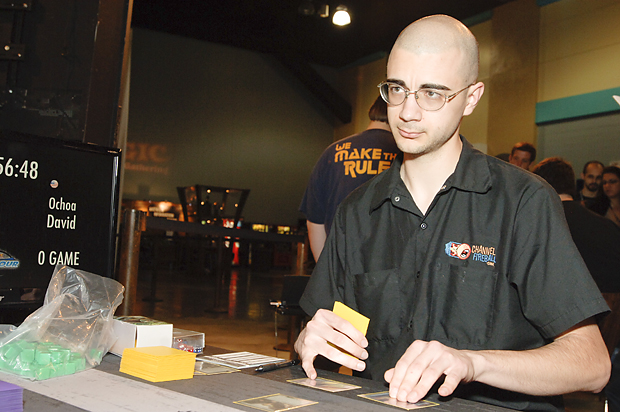 Mr. Ochoa, known for his hairlessness.

Avenger of Zendikar joined David's team along with seven of its Plant friends. Steam Vents triggered the Avenger's landfall to make the Plants 1/2s, and thus legitimate threats. Frank's answered this with Gideon Jura. Gideon's +2 loyalty ability ensured that Frank wouldn't fall to the Plant army before his flyers were able to finish the job. The Sphinxes continued to attack David and he sat at 7 life. David then used the namesake card of the deck, Comet Storm, to eliminate both Sphinxes. Without an offense, Frank soon fell prey to the continual onslaught of growing Plant tokens.

4 Day of Judgment 2 See Beyond