Round 14: On the Precipice

rad Nelson hails from Bismarck, North Dakota and when asked whether he'd had any solid finishes prior to this weekend he responded with "Uh…I've won an 8-4?" Cedric Phillips, on the other hand, Top 8ed Grand Prix-Columbus in 2004 and is a Magic columnist for an online strategy site. Both were all business this round playing for a possible spot in the Top 8. Phillips came into the match with 28 points needing a win and some lucky tie breaks to make it. Brad, on the other hand, was possibly in with so much as a draw, netting him a single point. With solid tiebreaks, that looked to be good enough but a win made him a hard lock. 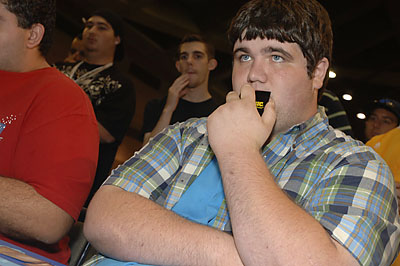 A win and Nelson would be on to the Top 8.

While shuffling Brad paused, questioning the integrity of one of Cedric's sleeves. Table judge Tony Mayer intervened to issue a warning, and Phillips replaced the sleeve. Nelson won the die roll, but before play began Cedric took a mulligan. His six were good, however, and Nelson came out of the gates with a turn-one Mogg Fanatic. His second turn yielded a Rakdos Guildmage while a second land for Cedric netted him his first play of the game, an Orzhov Signet.

Phillips' Solar Flare deck, which he used to qualify for the event at Regionals, could completely dominate Nelson's Rakdos deck provided he was given the time to do so. Things looked to be turning out that way as Brad made no turn-three play and Cedric had an enhanced Court Hussar to begin blocking. At the end of his turn, however, he found out why Nelson had made no play. An Incinerate took down the blocker, and Nelson made the life totals 18-11 in his favor after his combat step.

On the ropes much faster than he had hoped to be, Cedric spent much of his turn moving his mana sources around, speculating the best way in which to tap them in order to play the most relevant card in his hand. That turned out to be a Compulsive Research (discarding Urza's Factory) followed by a Castigate revealing Dark Confidant, Mogg Fanatic, and Incinerate. The Incinerate hit the removed-from-game-pile and, tapped out, Cedric passed the turn.

Nelson didn't have quite as much to think about on his turn. He made a Goblin token using his Rakdos Guildmage then bashed for 5. Post-combat a Mountain and Mogg Fanatic joined Nelson's side of the table and the life totals were 18-6, still in Brad's favor. Cedric untapped and finally managed to Wrath away Nelson's threats, following up with a backbreaking Castigate which nabbed Brad's Dark Confidant, though by sacrificing his Mogg Fanatics in response to the Wrath he had left Cedric at a more precarious 4 life. 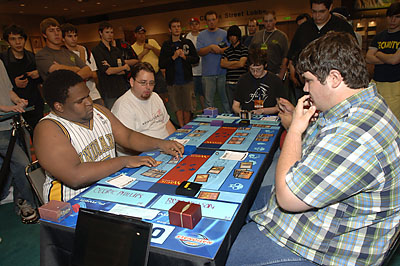 Phillips and Nelson battle as Luis Scott-Vargas watches on with great interest.

"Draw some blanks," said Cedric as Brad did exactly that, passing the turn. Cedric, on the other hand, had Skeletal Vampire and immediately went to work on Nelson's life total, eventually adding two Court Hussars to his side of the table as well. Nelson, for his part, continued drawing blanks, playing the occasional land and slowly watching his opponent take control of a game he felt he'd had in the bag. A hard-cast Aeon Chronicler from Phillips yielded one more draw for the North Dakotan and when it didn't offer up the burn he needed to finish things, he picked up his cards.

Nelson was quick to keep his second opening hand, but Phillips needed a moment to consider before shipping his for another chance, this time at six. Those were no better, and he sent them back for five. Resignedly Cedric looked at his tiny grip and said "Okay."

Brad led off with a Mogg Fanatic for the second game in a row, but gave Phillips the chance to get back into the game with no turn-two creature. Cedric, however, had a critical Signet, the lifeblood that could build him up to a huge threat to turn the game around. Instead, Nelson had Incinerate at the end of the turn and a Cryoclasm on Phillips' Godless Shrine, dropping him by 3 and setting him back to just two mana. Getting desperate, Cedric played a face-up Willbender which got in the way of a Giant Solifuge, leaving the life totals 18-9 in favor of Nelson.

An enhanced Court Hussar dug for a few more cards from Ced's deck, but it was not to be as a second Cryoclasm, Rift Bolt, and Char were more than enough to send the overwhelmed Phillips back to his sideboard on back-to-back turns.

"Can I keep ONE seven-card hand in this matchup?" Cedric whined as he and his opponent prepared for the rubber game.

Phillips DID get to start with seven cards in his hand for this game, but so did Brad, though his hand contained no one-drop. Instead it was the ever-present Signet from Cedric that was the first spell on the board, powering him into an enhanced Court Hussar on his third turn. Nelson, in the meanwhile, had only a Seal of Fire. On his third turn he finally added his first threat to the board in the form of a Mogg Fanatic, but he was not coming out of the gates quickly enough and the totals stood 20-19 in Phillips's favor after an attack with a Court Hussar. That was quickly followed up by an Aven Riftwatcher, and things were NOT looking good for Brad Nelson.

His turn-four play was to Cryoclasm Cedric's Watery Grave, but Phillips was prepared for the card (having left his Ghost Quarter untapped). He responded by sacrificing it to KO his own land, then searched out a Plains and put it into play. His demeanor was noticeably more cheerful now that the game had firmly swung in his favor and his opponent Nelson added a second Seal of Fire and passed the turn.

With access to at least five mana on his turn, things looked to be getting interesting for the Solar Flare player. He attacked with his Aven Riftwatcher and Court Hussar dropping Nelson to 16, then played a mystery morph. Previous games had already shown possible Willbender, so Brad was going to have to be careful with his burn. Drawing his card for the turn he asked his opponent how many cards were in his hand. An answer of three was enough to send Nelson deep into thought before simply playing a land and passing the turn.

Cedric used his pre-combat mainphase to play a Castigate.

"I'm dying to know. They can't ALL be lands," he said of Nelson's three-card hand.

He was right. One was Hit//Run, one was Giant Solifuge (which got RFGed), and one WAS a land. Nelson couldn't help but look dejected, the game firmly stacked against him. Maybe he SHOULD have taken that mulligan…

Cedric opted to attack all-out, sending his Morph, Hussar, and Riftwatcher (with only a single counter) into the Red Zone. His opponent hesitated before blocks, then moved Mogg Fanatic in the path of the Hussar. A Seal of Fire went to killing the Morph prior to damage and Phillips revealed the Willbender to send it back at Brad's head. That put Brad at 14 and after the attack he dropped to 11 from the Willbender and Riftwatcher. At the end of the turn totals stood 21-11, Cedric.

Nelson drew his card and played the Sulfurous Springs, then passed the turn. Cedric's upkeep removed the last vanishing counter from his Riftwatcher and he peeled some gas off the top: Compulsive Research. His Willbender got in for one but he only had another land before shipping back to his opponent. Nelson echoed the play dropping ANOTHER land before passing but had action during Cedric's combat step playing Hit in an effort to kill the 1/2. Cedric opted to bin a Signet instead, then had a Skeletal Vampire post combat. Brad would have none of that, however, using a Char with the Vampire's comes-into-play-ability on the stack to ensure it stayed dead.

Phillips was having a problem with drawing more action, however, and Brad got his Keldon Megaliths running, gunning down Cedric's tiny attack force. Nelson finally drew a threat, a second Giant Solifuge which Cedric wasted with a Wrath of God. Could the Rakdos player actually burn himself back into the game?

Ced was trying to dig for action and finally found it in the form of Grim Harvest on his Aven Riftwatcher, all the while toughing his opponent's hellbent Megaliths. Nelson needed to read the card to verify what it did, and the combo looked to be potentially lethal for his aggressive deck. Phillips could return Riftwatcher, then when it died (after netting him 4 life), recover the Grim Harvest and continue playing the Riftwatcher. Or, once he felt comfortable with his life total, he could return a large threat like Skeletal Vampire. 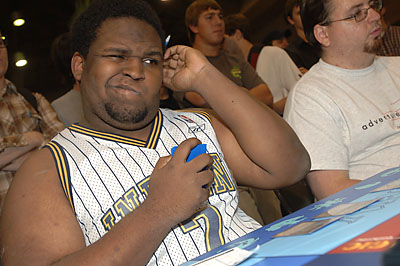 Nelson had yet another Giant Solifuge, but a Seal of Fire and Megaliths activation were necessary to take down the 2/3 flyer to prevent it from attacking. That triggered the recover on Harvest which Cedric paid, returning the Bird Rebel Soldier and when it came back down the totals were 12-4 in favor of Phillips.

A Rift Bolt from Nelson took aim at the Riftwatcher, but Cedric had a Remand. This seemed fine with Nelson, who had enough mana to replay the Bolt and, because Cedric was tapped out, the recover trigger on his Grim Harvest went unpaid, removing it from the game. That meant he needed to start drawing threats, and fast. The 4/1 Solifuge was continuing to get its beat on, and Nelson looked to be sitting in the best position he'd been in all game. Phillips' turn yielded him a Court Hussar enhanced which put him into Aven Riftwatcher, helping to shore up his suddenly meager life total. At the beginning of Brad's turn the totals were 5-2 Cedric, and Nelson wasted little time bashing with his Solifuge.

Cedric did some math, then blocked the Solifuge with only his Hussar. This was a risk. If Nelson had a burn spell he could kill his opponent using Megaliths, the spell, and the trample from Solifuge. If not, Cedric would win on his turn with an attack from his flyer. The audience seemed to wait on baited breath and Brad revealed his card in hand was…a land.

Amidst the crowd's applause, Phillips stood up victorious. If his tie breakers held out, he could be vying for a spot on the U.S. National team come Sunday.