With just two rounds to go and both Mike Hron and Fabien Demazeau in the crowd of 30-pointers, it's crunch time for making the run at Top 8.

Despite sticking at three land each for a couple turns, both players had solid starts for the opening game. Demazeau had Fertile Ground to accelerate into Ambassador Oak followed by Marsh Flitter while Hron ran Bramblewood Paragon, Gilt-Leaf Seer, and Lys Alana Bowmaster.

Demazeau swung in with his Oak and Flitter, dropping Hron to 13, then continued developing his board with another land and a Fertilid. Also finding some land, for Hron it was Plains and Lys Alana Huntmaster, picking up a +1/+1 counter from the Paragon and taking a shot at the Flitter thanks to the Bowmaster, forcing Demazeau to sac one of his Goblin tokens to save the Faerie, at which point he also used one of the counters of his Fertilid to pull out a Swamp. After Marsh Flitter sent Hron to 12, Demazeau dropped out a Taurean Mauler and a Lys Alana Bowmaster of his own.

The board was really starting to crowd up when Hron added a Preeminent Captain to the board, but that all changed next turn when the Flitter and Ambassador Oak came in, leading to a gang-block from Gilt-Leaf Seer, the Bowmaster, and the Captain. Peppersmoke on the Captain (drawing a card thanks to the Mauler) meant the Seer and the Captain hit the bin along with the Oak while Hron dropped to 11. Demazeau closed out the eventful turn with a Blightsoil Druid. 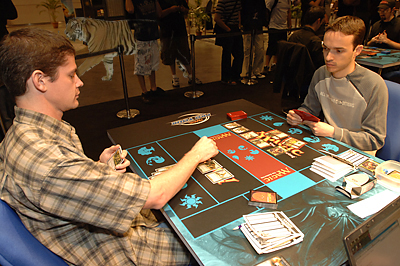 Mike Hron and Fabien Demazeau unleash their primal fury.Down seven creatures to three and needing to get something going, Hron pulled land #5 in the form of a second Plains, snapping it immediately into play with determination. Weight of Conscience hit the Taurean Mauler and Goldmeadow Harrier joined Hron's team. Demazeau finished Hron's turn with Gilt-Leaf Ambush and Peppersmoke on the Harrier, drawing yet another card.

In came the Flitter again, sacking the Taurean Mauler and making it Hron 8. But everything changed next turn as Hron layed out a desperately needed Primal Command to tutor up Imperious Perfect and go all the way back to 15 life in the process! Flitter came in for yet another one pointer and Demazeau followed up with Game-Trail Changeling. Down came Imperious Perfect for Hron, which led to a Bowmaster shot that forced a sac of the final Goblin token, a +1/+1 counter thanks to the Paragon, an Elf Warrior token from the Huntmaster, and then THAT Elf also got a +1/+1 counter from the Paragon, not to mention all of those Elves are now +1/+1 thanks to the Perfect. Nice. Turn.

After seeing that turn, things were starting to look scary for Demazeau. He had his own Primal Command, putting a Forest on top of Hron's deck and tutoring up a Wort, Boggart Auntie. Marsh Flitter and Game-Trail Changeling came in, and when all the combat and effects were done the Flitter and Bowmaster ended up in the 'yard along with the Game-Trail Changeling.

For Hron it was Kinsbaile Skirmisher up next, sending in the Huntmaster and an elf token and knocking half of Demazeau's 20 life out in one chunk with just two attackers. Trying to make a race of it, Demazeau brought the Game-Trail Changeling back with Wort, sent the fear Goblin in to put Hron at 11, and added a threatening Nath's Elite to the board.

Unfortunately for Demazeau, he was just too far behind to set up the giant alpha strike the Nath's Elite needed to finish things off. Hron correctly sent in as much as he could in order to simplify the board down to something manageable, using two Elf Warrior tokens, Kinsbaile Skirmisher, and Lys Alana Huntmaster to get his beat on. At the end of the combat Nath's Elite, two Elf Warrior tokens, Blightsoil Druid, and Wort were all that were left on the table for Demazeau, who was down to just 2 life. Cloudgoat Ranger came down as well for Hron, and just in the span of a couple turns this game had swung completely out of Demazeau's reach. Demazeau did what he could, returning the Taurean Mauler with Wort and sending in what he could, but there just wasn't enough muscle left to put it away. Once he got the turn back Hron verified his opponent was at 2 and began sending in the whole team but Demazeau conceded as soon as it was clear the creatures were coming over.

Game 1 was a hard-fought battle in the trenches that took over 40 minutes to complete. Game 2 was a five-turn blowout that took more time to shuffle than play. Demazeau played two forests but had no creatures and then missed his land drop on turn three. Hron's opening was basically the opposite, leading with Goldmeadow Harrier, swinging for 1, and then using the third turn to Elvish Harbinger for Bramblewood Paragon. Demazeau's deck coughed up a Bosk Banneret, but things were basically already all over next turn when Hron dropped out a devastating Imperious Perfect on his fourth turn, ready to start some serious Paragon shenanigans on the very next turn. Unfortunately for Demazeau, all he had for his next turn was a discard. Down came the Paragon for Hron, and a quietly frustrated Demazeau didn't even bother to check his next card, instead conceding immediately to get the terrible game over with.

It was a tough break for Demazeau. For Hron, the man that won the last individual draft format Pro Tour, it meant just one more step toward another Top 8 and an incredible shot at defending his title.