Round 14: Pulling Back the Top 8 Veil 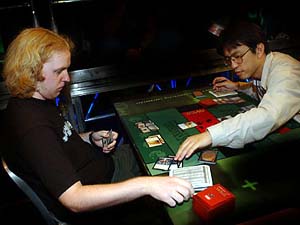 The pressure was tightening for a spot in the Top 8.

players stood at 10-3 coming into the round. With two rounds to go, it wasn't clear how many players, if any, would make Top 8 with 33 points, so both players were hungrily looking to add another three points to their total. For Tsuyoshi Fujita it would be a chance to improve on the second-place finish already on his resume, which came at Pro Tour Tokyo at the hands of Zvi Mowshowitz and "The Solution." For Pinkster of The Netherlands, it would be a chance for his first shot at a Pro Tour title.

Pinkster was the aggressor from the start, playing out Wicked Akuba and then sending in after giving it a Manriki-Gusari to swing at Fujita's head. Fujita's board was Skullsnatcher, Kami of the Vanishing Touch, and then Raving Oni-Slave, but the equipment was simply making Pinkster's creatures too good in a fight, and the cheap equip cost meant the Gusari was playing offense and defense.

A gang-block brought down the Akuba, but Soulless Revival brought it right back, along with a Sink Into Takenuma to empty Fujita's hand. Once Fujita managed to gang-block the Akuba a second time, Pinkster seemed to be out of gas, having no creature to put into play for several turns. However, as soon as he hit seven mana, a Kami of the Honored Dead joined the fray. Fujita was out of answers and too low on life, and he promptly conceded as soon as he'd drawn his next card. 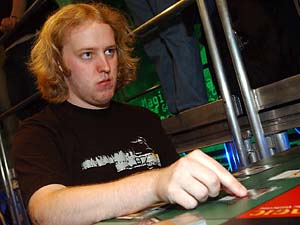 Wilco wasn't sure when he was quite dead in Game 2.

For this one it was Fujita on the attack, starting with Wicked Akuba, Raving Oni-Slave, Hand of Cruelty, and Kemuri-Onna. Pinkster did his best to trade the board down to something more manageable but he was too behind on tempo to pull anything off.

Strangely, the killing blow came a turn earlier than he expected. Fujita used Rend Spirit to remove Pinkster's blocker and attacked for lethal damage, but Pinkster just sat there as if he wasn't dead yet. The life discrepancy was quickly figured out, and it was confirmed that Pinkster was indeed dead.

Had he known his actual life total he could have played to survive another turn, but given the Patron of the Nezumi in Fujita's hand and just how far behind Pinkster was it's hard to imagine the mistake mattered, something he pointed out himself as they shuffled up for Game 3.

For the decider Fujita took the defending role, using Kami of the Vanishing Touch and two consecutive doses of countermagic (Hisoka's Defiance and Oppressive Will) to keep Pinkster in line. Sire of the Storm hit turn six but Fujita didn't seem to have any spirits or Arcane spells left, so it became a slugfest, with Fujita sending in the air while Pinkster came over on the ground backed up by healing effects.

As the game developed into a wild race of haymakers the deciding moment came when Pinkster brought his entire team in except for his healer. Fujita blocked as expected, but when Pinkster tried to save a badly needed guy with his healer, Fujita broke the play up with a tech-y Veil of Secrecy. This countered the healer's ability, causing an extra Spirit to go the graveyard that Pinkster couldn't afford to lose, and drew Fujita a card off the Sire in the process.

Fujita sent his forces in to set up a killing blow next turn, and Pinkster was forced to use the Devouring Greed he'd been hoping to use to kill Fujita this turn. Instead he had to sacrifice almost all but one of his guys just to stay alive, putting the life totals at 14-4 in his favor, but the board was now almost hopelessly lost for the Dutch player.

After taking an attack on the chin, Pinkster got another creature into play, looking for some way to last another turn and somehow deal those elusive last four points of damage, but Fujita was having none of it. The Japanese player removed both creatures from the board and smashed in with the team, winning the match and in all likelihood guaranteeing himself a spot on Sunday.