Round 14: Rob Dougherty vs. John Ormerod 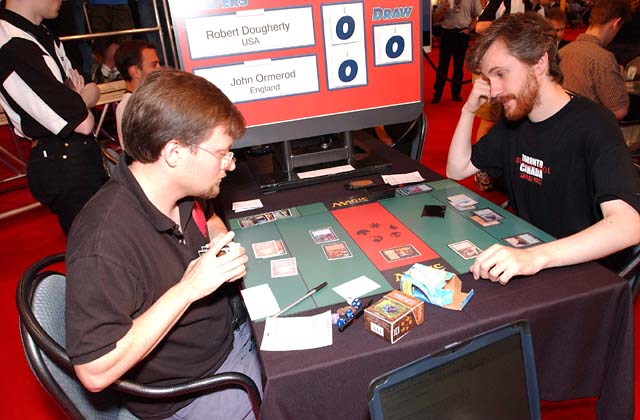 Rob Dougherty is the owner of Your Move Games, and has been a staple on the Pro Tour since his Top 8 finish at 1999 Pro Tour-New York. Dougherty had not been much of a force on the Pro Tour before then, but ever since he's had plenty of success. He won a team Pro Tour, and won Pro Tour-Columbus last week with Team Your Move Games. Many consider John Ormerod to be the best English player, and his record speaks for itself. He placed Top 8 at Pro Tour-Mainz, and 9th at Pro Tour Chicago two years ago.

Dougherty started off with Underground River and Duress, and saw a hand of two Impulse, Force of Will, Thwart, Nevinyrral's Disk, Dust Bowl and Tropical Island. Force of Will was removed from Ormerod's hand. Dougherty summoned Winged Sliver on turn two. It attacked on the following turn, and Dougherty put two mana into his pool, and returned both his lands back to his hands to play Gush. He then played City of Brass, and targeted Tropical Forest with Vindicate. Ormerod countered it with Force Spike. Muscle Sliver came out on the next turn, and Winged Sliver attacked for two.

The two Slivers attacked on Dougherty's next turn, and would have been joined by Meddling Mage if not for Counterspell. Ormerod used Thawing Glaciers, untapped, and played Nevinyrral's Disk. On end step, Dougherty used Vampiric Tutor, getting Vindicate. He attacked, and then targeted the Disk with Vindicate. Ormerod told Dougherty "I'm going to fight that," and used an alternate casting cost Thwart to counter the Vindicate. He then untapped, and activated the Disk to kill off Dougherty's small but deadly Sliver army.

Dougherty went right back to rebuilding, as he played Muscle Sliver. Ormerod Counterspelled it, and Dougherty added his own Counterspell to the stack. Ormerod then played Force of Will, and the Sliver headed to the graveyard. This exchange left Dougherty with only one card in hand, while Ormerod had three. Muscle Sliver came out on the next turn, and resolved without a problem. It was joined by Crystalline Sliver, and Ormerod was now in trouble. He was at eight life points, and had two turns to draw an answer. He did play Powder Keg, but it was an answer that would activate one turn too late. After the next attack, Ormerod scooped. 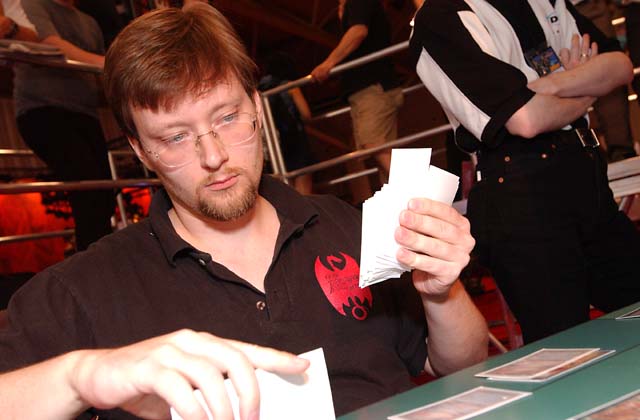 Once again, Dougherty had a first-turn Duress. He saw Force Spike, Nevinyrral's Disk, Brainstorm, Impulse, Powder Keg and Tropical Island. The Powder Keg was sent to the graveyard. Ormerod then used Wasteland to kill off Dougherty's only land. After two turns, Dougherty summoned Crystalline Sliver, which Ormerod targeted with Force Spike. Dougherty added Force Spike to the stack, and the Sliver resolved. Things didn't look too good for Dougherty at this point, since he only had two lands, and one of them was Undiscovered Paradise. He played Meddling Mage, but Ormerod Counterspelled it.

The Sliver kept attacking, but Dougherty was well aware of the Disk that was in Ormerod's hand. Dougherty did play a fetch land, which would help him stabilize his mana base. However, Ormerod used Wasteland to kill off Dougherty's Tropical Island, and then played the Disk. The Sliver attacked for two more points of damage. At this point, a game of chicken developed, as Dougherty didn't want to overextend with a Disk in play, while Ormerod didn't quite want to activate the Disk yet. He played a pair of Impulses on end step, and then got to work with Dust Bowl to cripple Dougherty's mana base. Rather than blow the Disk, Ormerod simply played Morphling, which would allow him to outrace the Sliver. Regardless, Dougherty was stuck at one land, and wasn't going to put up much of a fight. After a few attacks from the Morphling, Dougherty conceded. 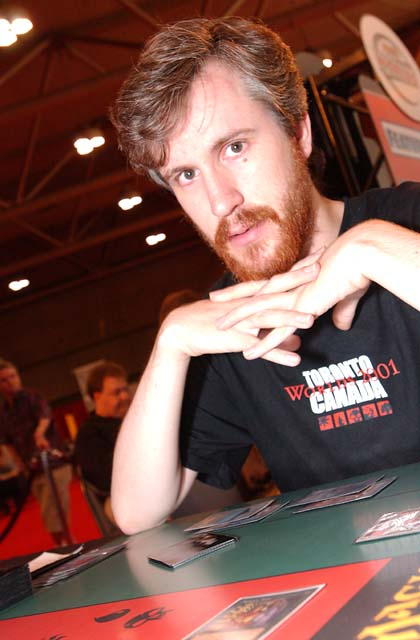 John Ormerod Play started off slow this game, and the first non-land spell of the game was Dougherty's turn three Hibernation Sliver. Ormerod countered it with a pair of Force Spikes. Muscle Sliver came out on the following turn, and was Counterspelled. Ormerod cast Disk on turn four, and Dougherty countered it with Force Spike. With Ormerod all tapped out, Dougherty played Winged Sliver, which resolved. Ormerod then played a second Disk, which got to hit play. Ormerod summoned Morphling, but Dougherty had Force of Will. Ormerod played Masticore on the next turn, which resolved. Crystalline Sliver also hit play, and Ormerod let it resolve, probably feeling comfortable with the situation since he had an active Disk out.

Sure enough, Masticore attacked and received a regeneration shield, and Disk was used to blow up the world. Masticore survived, and continued to hit Dougherty for four life points every turn. Dougherty used Vampiric Tutor to get Gush, and used it during his main phase after adding mana to his pool. He then targeted Masticore with Vindicate, and Ormerod simply regenerated it. Dougherty realized he couldn't win, and conceded.

After the match, I asked Dougherty if he had a way to kill the Masticore in his deck. He explained that he left Swords to Plowshares in the sideboard, because it's a suboptimal card in the matchup. He Tutored for Gush because he knew that Omerod had plenty of cards, and needed more than one threat, because the first one probably wouldn't resolve.