Round 14: A Ruel Vendetta

Ruel tried to muster his best game face as he sat down to face Germany's Michael Diezel for Round 14. Was there some kind of history between the two? It is kind of hard to imagine since this was Diezel's first Pro Tour. He does attend European Grand Prix events so perhaps he could have run afoul of the Road Warrior at one of his many Grand Prix visits. 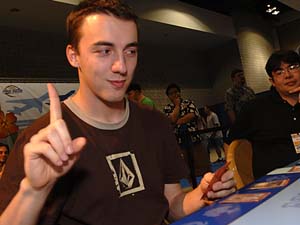 "He beat my bro. He is trying to keep us both out of the Top 8," sneered Ruel.

He was teasing the young German player as evidenced by the sunny smile that broke through but what once looked like a first time double Top 8 for the Ruel brothers had clouded over in recent rounds with both players picking up their third losses. Antoine was one table over fending off another surging new-comer in the Ghost-Dad wielding Ben Goodman.

Diezel came out quick - and at the cost of two life - with Hound of Konda. Olivier had led off and followed up with a Castigate, revealing a hand of double Plagued Rusalka, Kami of Ancient Law, Orzhov Pontiff, and Castigate as well as a couple of lands.

Diezel sent a Castigate right back and saw Paladin en-Vec and - well, it didn't matter what else he saw. Paladin had to go. Ruel played Hand of Cruelty and Diezel reinforced with Plagued Rusalka and Kami of Ancient Law.

Both of these players were sporting agro Orzhov builds, and while many of the other decks were concerned with the upper curve these guys were exploiting the lower range with the Pontiff that was sitting in Diezel's hand and the Teysa that Ruel put into play.

"Interesting," declared Ruel as Diezel put down Nantuko Husk on the next turn.

"Interesting," was Diezel's reaction when Ruel attacked with the Teysa. Oliver could not tell what was so interesting about the play.

"I am trying to figure out if you play Ink-Eyes or not."

"Wouldn't it be easier to figure out if I had five mana or not?' laughed Olivier as he spread he hands over the three mana in had in play.

Diezel took two and figured what was good for the goose… and attacked with Husk.

"That is not what I thought you would do."

Diezel put damage on the stack and sacrificed the Husk to killed the Bushido man. Ruel cracked back for one with his Teysa token and played Ghost Council of Orzhova. While the game carried on for a couple of more turns, it is better if we just looked away as there was nothing Diezel's deck could really muster as long as Olivier kept his mana untapped.

A dejected Antoine was found lying by the side of the feature match area in between games of this match. Apparently he had been sideswiped by a runaway Tallowwisp and left for dead.

"J'ai super bien joue." Apparently that means, "I played so well," and is best delivered in a sarcastic tone.

"You did play well," shrugged Diezel.

"How come you and your brother don't play the same deck?" asked the newly crowned Resident Genius Mike Flores.

Both players opened up with tapped dual lands and turn-two Dark Confidants. Diezel had the rarely seen Promise of Brunei for turn three to the delight of Olivier. "It's alive!" he shouted.

The players knocked into each other for two which prompted Olivier to get up from his seat and stretch his lower back before playing Hand of Cruelty.

"He is an old man," whispered Diezel - apparently trying to earn some real enmity from Ruel.

Diezel added Plagued Rusalka, who was fast becoming the breakout star this weekend. There were three distinctly different-looking decks sporting the one-drop in the feature match area alone. The German attacked with Bob and had a second main phase Castigate. He saw some lands, two Ravenous Rats, and two Jitte. 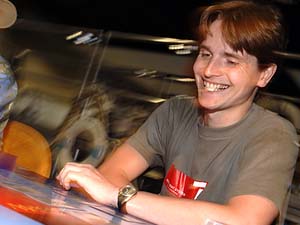 Diezel kept up with the Road Warrior's banter

Seeing no point in taking the legendary artifact, Diezel took one of the rats - of course he flipped up another Castigate a turn later, which made it look like a poor idea in hindsight. Olivier played Plagued Rusalka and his Rat. Diezel had no choice but to attack with Bob. Ravenous Rats blocked and a bloodbath ensued that resulted in four Natalie Portman tokens and a Hand of Cruelty.

"She is obviously legendary," protested Ruel as Diezel grudgingly Castigated one of the Jittes. Olivier played a fourth land and quickly equipped the Hand and attacked. He seemed startled when Diezel put everyone in the way.

"They are colorless," pointed out onlooker Aaron Forsythe to Ruel, who clearly thought the creatures were white. Ruel shrugged and wiped out all but one member of the team.

"You guys want to see a top deck?" Oliver asked the spectators. He peeled his card and showed it to the delighted crowd before he looked at it himself. He was rewarded with Paladin en-Vec, which he promptly played and equipped.

"Maybe I should try this too," said Diezel. The crowd peered as Diezel revealed Nantuko Husk. Olivier laughed, "They don't seem to know what your card is."

The German played the Husk and Bob. Olivier killed a token and attacked. Diezel put Kami of Ancient Law in the way and sacrificed it to prevent the Jitte from piling up counters. Ruel killed Bob with the lone counter still on the Jitte.

Diezel was out of gas and there was nothing his deck could offer to defend against the Jitte - a card he did not even know Ruel was running.

"They said you did not run Jitte."

Olivier was in great shape to make the Top 8 with one more win and a draw. Diezel, who had been paired down now, shared his record and should they meet again in the Top 8 he should be better prepared.