Round 14: From the Shadows

nd we're right on the bubble. Sunday is a little different from past Pro Tours as we're still finishing off the Swiss. It's Round 14, the last round, and both of these teams are on 30 points and battling for a place on the final table. 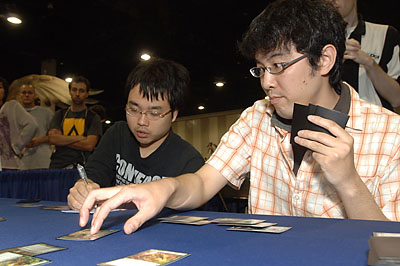 Shingo Kurihara made the Semifinals back at PT-Geneva earlier this year and is joined by Chikara Nakajima. Their opponents are Chris Lachmann and Jacob van Lunen, a U.S. team with a very focused strategy that has seen them batter opponents all weekend with bottom-of-the-pack Slivers nobody else wants.

Lachmann and van Lunen were on the play, and they kept their hands while Nakajima took advantage of a 'free' mulligan.

The Americans have made a big splash forcing Slivers this tournament, and they got the dream start here of first-turn Virulent Sliver followed by Sinew Sliver and Spinneret Sliver.

Kurihara and Nakjima were already down 9 life and a sickly four poison counters before they even got to lay their third lands.

Before this tournament I probably wouldn't have even glanced twice at Virulent Sliver, but it's already propelled Lachmann and van Lunen to a turn-three kill this weekend. Given the choice between taking out Sinew Sliver or Virulent Sliver, the Japanese team unsuspended a Rift Bolt and nailed the poisonous Sliver. He's just that dangerous early on.

Lachman and van Lunen had a fairly uneventful third turn, although van Lunen was able to slivercycle for a more dangerous Reflex Sliver. On the fourth turn he added haste to the shared abilities and crashed in for an additional 3. Lachmann showed that they do also play other creature types as a Calciderm entered play.

This was looking real ugly for the Japanese team. After losing the dice roll and being forced to go second they'd been battered back on the ropes right from the start and were scrambling for any way to try and relieve the pressure.

Citanul Woodreaders entered play as a lowly Horned Turtle and was joined by a Nessian Courser. Kurihara added Shivan Sand Mage to the defence.

Lachmann and van Lunen were still on top and making damn sure they were staying that way. Death Rattle did for the Sand Mage and a Synchronous Sliver added to the growing arsenal of abilities for the lil' alien dudes. The Japanese team decided the vigilance-granting Sliver was the most dangerous and took him out with a tag-team block of Courser and Woodreaders.

Kurihara and Nakajima were now down to 8 life and still under a tremendous amount of pressure. They aimed a Riddle of Lightning at Reflex Sliver, and there was a brief anxious moment as Kurihara had to scry both to the bottom. The blind top card was good enough and with the haste-granting Sliver out of the way the alien Onslaught could at least be slowed down a notch.

This was a good thing too as both a Spitting Sliver and Synchronous Sliver entered play. Ominous, but at least they weren't already charging down the Japanese team's throat.

Kurihara and Nakajima still hadn't even as much as made a scratch against Lachmann and van Lunen's life total. Tarox Bladewing entered play, but even with haste he had to stay back to mind the fort. It was a flimsy defence at best, as the only other creature was Nantuko Shaman. The game was looking very grim indeed.

A Shadow Sliver entered play and it looked like that might be the game right there as Spitting, Sinew and Synchronous Sliver slipped into the shadow zone and bypassed the Japanese team's blockers. 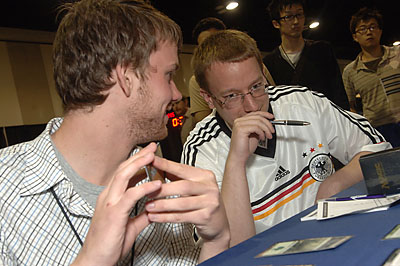 Chris Lachmann and Jacob van Lunen have powered their way to the top thanks to the Sliver hive mind.

The fog from Nakajima gave a brief glimmer of hope. Now that the battle had slipped into the shadow zone they tried to adjust their lines to compensate. Spirit en-Dal gave them a creature that could block, and Take Possession on the Spitting Sliver gave them enough.

This entire game had been pretty much Lachmann and van Lunen standing on their opponent's feet and hitting them in the face with a claw hammer, and they weren't about to relent now.

Midnight Charm killed the shadowy Spirit, and Venser's Diffusion got back their Spitting Sliver. This left the Japanese team with no blockers left in the shadow realm and nothing to stop the army of Slivers crashing through to take the Sliversmiths all the way to the final draft.