Round 14: Sigurd Eskeland vs. Matt Henstra 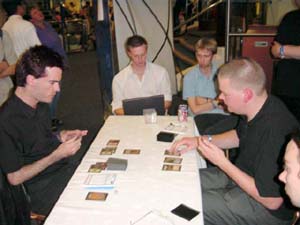 After extensive shuffling from both players, Sigurd, going first mulligans down to a five card hand but evens things up by playing a second turn Gerrard's Verdict on Matt, forcing Matt to discard Ghitu Fire and Forest. After thinking for a while, Matt attempted to mount some pressure by playing and attacking with an unkicked Thornscape Battlemage but is soon thwarted by Sigurd's Spectral Lynx.

Matt pressurized Sigurd some more by playing on consecutive turns Flametongue Kavu and Ghitu Fire, both targeting the Lynx in an attempt to get some damage through. Again Matt tried for another Ghitu Fire on the Lynx which Sigurd thought about for a long while, looking at the life totals and the cards in Matt's hand before playing Dromar's Charm to counter it. Sigurd traded the Lynx for Flametongue Kavu and when Matt played a Blurred Mongoose, cast Rout during his next turn to kill both of Matt's monsters.

Matt was not phased by this and played and attacked with Raging Kavu again meeting with a Rout. Henstra seemed to have a never ending supply of threats and simply played another Raging Kavu on his next turn dropping Sigurd to 7 life. This prompted yet more long thinking from Sigurd as Matt had played his fifth land, a Shivan Oasis which meant that there was the possibility of Matt playing a Skizzik with kicker. Finally Sigurd decided on playing Yawgmoth's Agenda and Matt did indeed play Skizzik forcing Sigurd to scoop up his cards. 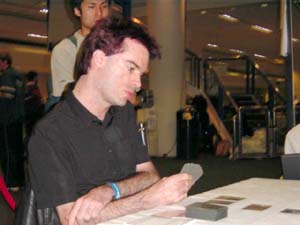 This time it was Matt's turn to mulligan and was further punished by Sigurd with another turn two Gerrard's Verdict, netting Sigurd 6 life from his two discarded lands. Matt played a Thornscape Familiar on his next turn which was simply Recoiled at the end of his turn, again he discarded a land.

Sigurd gained further advantage by playing Fact or Fiction revealing two land, Desolation Angel, Vindicate and Rout which Matt split into the Rout and land in one pile, which Sigurd took.

Next turn Sigurd has another Fact or Fiction revealing Slay, Vindicate, Gerrard's Verdict and two land. Sigurd takes the Verdict and Vindicate and Verdict's next turn as Matt only has Thornscape Familiar as a threat. This is soon joined by Raging Kavu and Matt burns for 1 point of life loss as he forgets the mana reduction ability of the Familiar.

Rout clears away both creatures and all Matt can do is play his fourth land, which Sigurd promptly Vindicates. At the end of turn he plays a Dromar's Charm to gain five life (taking him to 25) and then plays out Yawgmoth's Agenda during his main phase, leaving three mana open to counter.

Sure enough the next turn he played the Desolation Angel from his graveyard with kicker, the turn after a Spectral Lynx, then Ravenous Rats and Matt (finally) scooed up his cards. 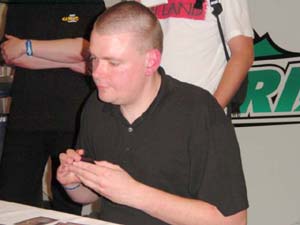 Sigurd makes a point of asking the judge how long they have for sideboarding and shuffling as there is not much time left in the round for the third game.

Matt leaded with Blurred Mongoose and Sigurd has for the third game in a row a second turn Gerrard's Verdict, claiming land and Overabundance. After a second Blurred Mongoose Matt passes the turn after missing his fourth land drop but Sigurd can do nothing except play his Salt Marsh but this lets him Rout a turn later.

Thornscape Familiar lets Matt play a Raging Kavu in the same turn which attacks and things don't look too good for Sigurd as he appeared to have no play on his turn but was in fact just waiting to use the Slay in his hand. This attack drops Sigurd to 8 life and by now a large crowd has gathered around the players, watching a tense match which will determine which of these players will make top eight.

Matt tries for Overabundance and Sigurd thinks about it for a long time before responding with Fact or Fiction. Sigurd turns over Ravenous Rats, Desolation Angel, Spectral Lynx, Slay and Plains and takes the land, Rats and Slay and then uses a Dromar's Charm from his hand to counter the Overabundance.

The Familiar takes Sigurd to 6 life and then time is called. Sigurd spends plenty of time looking through his graveyard and at the life totals and asks for a draw which Matt refuses. Eskeland played Desolation Angel with kicker from his hand and all Matt could do was Urza's Rage Sigurd in response.

Neither player can kill each other within the five extra turns and the match ends in a draw.